Having owned two different 205s, a 106 Rallye and two 306 GTI-6s, I desperately want Peugeot to return to those glory days. And take the fight back to the Golf with which it shares those iconic three letters. 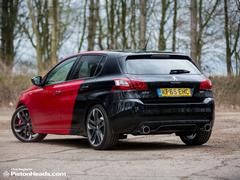 Famously having dropped the GTI ball and let VW run with it, it's easy to forget that back then things were the other way around. When Peugeot was at the top of its game VW lumbered us with the rather uninspiring Mk3 and Mk4 GTIs, before rediscovering its mojo with the Mk5 and onwards. Peugeot needs something exceptional to seriously challenge this winning streak and knock the current Golf GTI off its perch.

And the French have come out swinging, not least with a starting price identical to that of the equivalent five-door Golf GTI. To that, Peugeot has drawn up a spec that should make us all sit up and take notice, including a 270hp 1.6-litre engine, six-speed manual gearbox, suitably wider, lower and stiffer chassis and - crucially - a mechanical limited-slip diff. Michelin Pilot Super Sport tyres and Alcon brakes are also standard kit and demonstrate commendable reluctance to skimp on the detail or the substance - our test car had just two options, just one of which really makes any odds. But I'll come to that later. 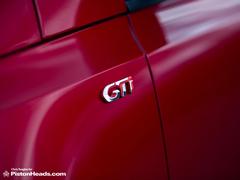 There is a 'diet' 250hp version too but this is the full-fat 270hp model, sharing a motor with the RCZ-R and impressing with both its numbers and the tech within to deliver it. It claims to be the most powerful production engine of its size and includes goodies like Mahle lightweight pistons, a twin-scroll turbo and host of other tech. This manifests itself as a potent mix, with a wide spread of torque and heady turn of speed. Shame it never sounds as inspiring as it looks on paper though, even with the Sport button pressed and additional noise piped into the cabin. Manual-only sounds laudable in this age of dual-clutches too - a pity then it's not quite the sharpest.

The Torsen limited-slip differential, on the other hand, suits the car well, especially for road use. Getting on the power early still brings with it that feeling of the car being sucked towards the apex, but it is much more subtle than, say, a Megane. For those who enjoy life on the edge it's possibly all a bit safe and predictable but it's a worthy feature and adds welcome dynamism you can enjoy at civilian speeds too. 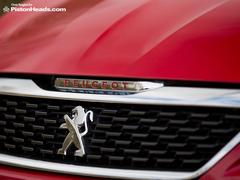 Same can be said of the chassis set-up, which is both taut and yet still comfortable too. It feels tied down without being excessively stiff for the sake of it, meaning it feels agile, well damped and fun to drive with all the enthusiasm you'd hope in a hot Peugeot. The 308's relatively light weight helps here - its 1,205kg is equivalent to cars from a class down like the Renaultsport Clio.

It does, however, quickly reach a point experienced drivers or track day regulars will find a little limiting. Initial understeer is to be expected but there's seemingly no option to adjust the car's attitude on the throttle as you can the best hot hatches.

Generally good though. Until we get to the steering. At first I thought it was just the tiny, weirdly positioned wheel with its over-stuffed rim. But as I put that aside I concentrated on the steering feel, or lack of it. Not unusual in this day and age and not disastrous but to regain that hot hatch crown Peugeot needs to be doing better than OK.

Steer around the issue
Cabin-wise it's also difficult to see past that steering wheel, figuratively and literally. The seats are excellent though, more so with the standard fit massage function activated. Fit and finish might not be up to the best of the class but it's acceptable and the standard kit is generous with all the expected aids and even a rear-view camera. A calculator is a quirky addition to the infotainment system but, perhaps, a handy bonus for maths students looking to while away traffic jams crunching numbers. 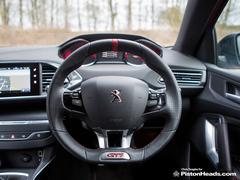 Generally handsome, if a little plain, the looks of our test car were dominated by one of the two option boxes ticked. Yes, we're talking about 'that' paint scheme. At £1,300 the Coupe Franche two-tone is certainly an acquired taste. Perhaps less Marmite and more like tripe, by which I mean I haven't yet met anyone who likes it and if I did I'd question their sanity.

So, back to where we began. Is the 308 GTI enough to win over someone with fond memories of fast Peugeots of old but more recent ones of benchmark competition from the dominant Germans? After a quick once-over in the showroom and, perhaps, a short test drive you'd be hard pressed to find anything stand-out to tempt you away from the usual suspects. And perhaps a few - that steering wheel for instance - that might have you running for the hills. Which is a shame. Because I don't think anyone brave enough to take the plunge would end up being disappointed with their purchase.