Shocking revelations at the wheel of the celebratory retro-modern 991

The disclaimer at the bottom of the homepage for

should give you some indication of the attitude of Porsche AG towards those who dare to re-imagine the perfect retro-modern 911 in their own eyes. Not that this has stopped Porsche having a go, even if the finished product is far less extensive than those

. And around a fifth of the price.

The 50 Years Edition is not the first in-house retro-modern 911 though. The 997-based

took the idea further, and more exclusively, with just 250 built back in 2009 and still commanding big numbers if the £149K for

currently in the PH classifieds is anything to go by.

That compares with 1,963 50 Years Editions, the full press pack for which we posted up to accompany our original news story.

Swotting up
Suitably up to speed? OK, you'll know it's basically a two-wheel drive Carrera 2 S wearing a Carrera 4 widebody shell and powered by the 400hp 3.8-litre six. Houndstooth fabric inserts in the style of the retro Pepita cloth are the most distinctive interior feature besides extensive 50 Years Edition branding. Well, you want something for that near £9K premium over a standard 2 S, right? Outside you've got those Fuchs-style wheels in a distinctly un-retro 20-inch diameter, a bit of chrome between the lights and suitably 60s paint shades of Graphite Grey or Geyser Grey to complete the look. 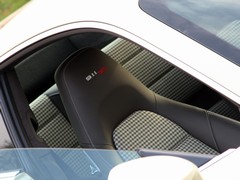 Credit to Porsche GB for speccing its press car with a manual gearbox too. OK, so there's a sense of cable-driven rubberiness in the shift but the gate feels tighter and more positive than earlier manual 991s and once over the novelty of seven ratios on a manual shifter it feels very normal.

What was that about uncorrupted interaction though? Ah yes, seems the 991 has gained rev-matching downshifts to make the dwindling number of die-hards opting for manual over PDK even more indignant. After all, if you're that stubborn you can probably heel'n'toe yourself, right? It only interacts in Sport Plus mode though; below there's a video along the same twisty road with the system on and off to see who could do it better. We'll call it a points draw.

Quirk of fate
And this is one of the ironies of the 50 Years Edition; in celebrating some of the trademark eccentricities that have made the car such an institution it also shines a light on the way technology has been introduced to eradicate them. 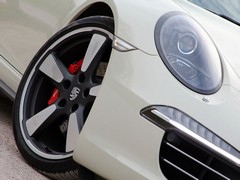 Can same be said of upscaled Fuchs?

Another example. The width of the thing. That extra 44mm in the Carrera 4's body makes the difference between threading it along a classic British B-road with a grin on your face or wincing every time the offside rear wheel ba-dum-ba-dum-ba-dums along the cats' eyes while the nearside one kicks up dust from the kerbside. The 991 is arguably the most beautiful of recent 911s. But it's put on some weight in middle age has lost that trademark wieldiness.

So it's a bit of a rotter then?

Er, no. Porsche can try and sanitise the 911 driving experience for the modern age but it's still a unique proposition. Sports auspuf in loud mode, the S motor has that chuntery, guttural tickover and howling top end you'd have associated with GT3s of a generation or two back and, like them, gets increasingly more thrilling the nearer to the redline you go. Revs? It loves 'em.

Busy body
The standard PASM is recalibrated for the widebody set-up and even in standard mode the 50 Years Edition feels pretty lively and involved over a bumpy road, the steering feeding back with plenty of detail even if not as exquisitely nuanced as it once was. It still makes demands of you if you're out to cover ground cross country, yet will tickle along on the motorway showing 30mpg-plus. 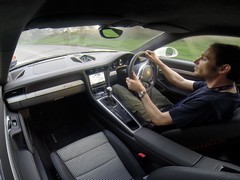 Still not sold on the whole retro thing though? Well, this is among the few 911s we've driven that seems to elicit heartfelt oohs and aahs from even 'civilian' onlookers. By which we mean, not to put too fine a point on it, women. Yes, drive a GT3 and you'll attract a) geeky blokes of a similar mindset or b) mid-life boy racer derision from the fairer sex. Possibly c)

if you haven't parked yours up yet as ordered. [If we hadn't someone would have... - Ed.]

But even non-car folk seem won over by the 50 Years Edition. Actual, real life women stopped in their tracks and said 'nice car!' Wonders never cease.

A quick vid here attempting to pit man versus machine in the context of using the Sport Plus auto rev-matching and then trying the same stretch of road using good old-fashioned heel'n'toe, with apologies for the slightly vague sound quality.