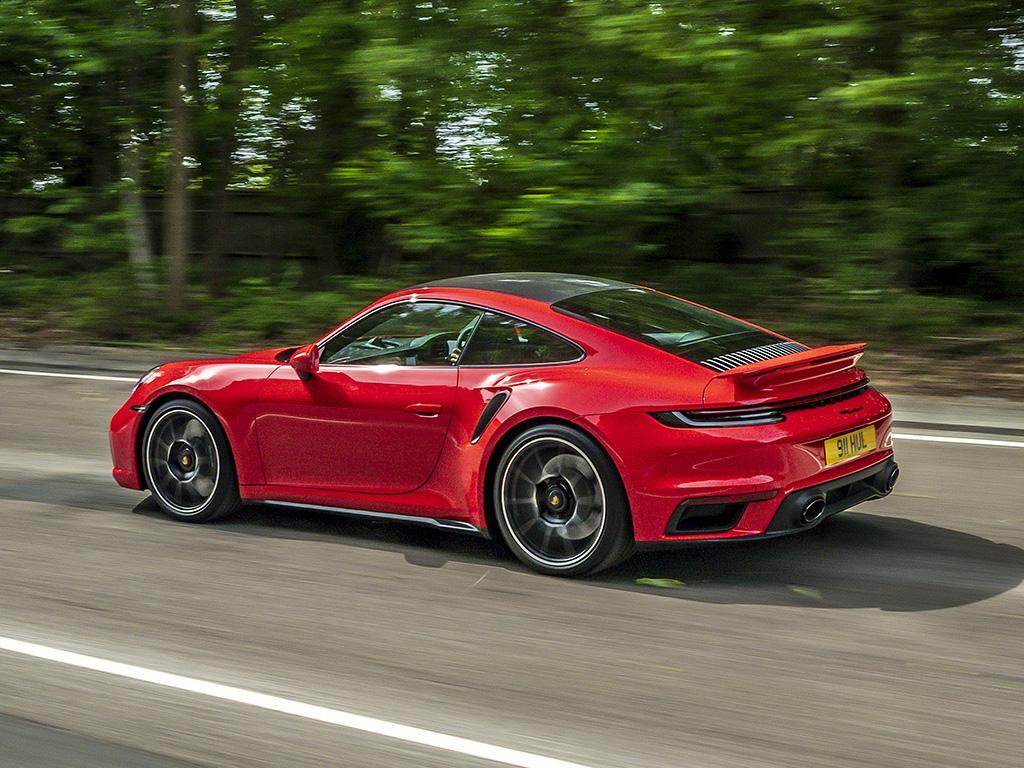 Wherever this car goes, there is chin stroking. You can't really avoid it. These hugely powerful four-wheel drive rocket ships for the road have become so violently accelerative that even the most broad-minded performance car advocate has to stop for a moment and wonder how much power is too much. Can you really use all of this car's performance on the road? I'll reflect on that pseudo-philosophical stuff later on - for now, I'd rather just tell you what this 992-based Porsche 911 Turbo S is like to drive.

Set the headlines aside for the new 3,745cc flat-six twin-turbo engine. Derived from the 2,981cc unit that powers the Carrera range, it produces 650hp. That's a 70hp jump from the previous Turbo S - the most sizeable leap in 911 Turbo history. Porsche quotes a 0-62mph time of 2.7 seconds, which is kind of dizzying even to think about (although I suspect even that figure is conservative). And to actually experience? Never mind dizzying - it's concussive.

Elsewhere there's 15 per cent more downforce from the active aero setup and wheels that are staggered, front axle to rear, both in terms of diameter and width. Up front are 20-inch wheels with 255-section tyres, while at the rear the wheels are 21 inches high and the tyres 315mm wide. Rear-wheel steering was introduced on the Turbo last time around and it's still present here, fitted as standard. There's torque vectoring, of course, plus active anti-roll bars (or Porsche Dynamic Chassis Control).

It goes on - adaptive dampers are standard but for £1,052 you can add Sport Suspension, fitted here, which drops the ride height by 10mm. Carbon ceramic brakes are thrown in, which is probably just as well. The gearbox is an eight-speed PDK. A sports exhaust is offered for the first time, costing £2,180 - again, this car has one fitted. The basic price of the fixed-head 911 Turbo S is £155,970, although with its many extras this particular test car would cost you £172,626.

Porsche quotes a running weight of 1,640kg, making this latest Turbo S the heaviest one so far. It's wider than ever, too, the 1900mm span across the rear making this new model 20mm wider than the previous one (although the track grows by only 10mm), while the front track swells by 42mm. That more generous spread front and rear will prove to be significant.

Professional athletes talk about marginal gains, about honing their training, technique or equipment in pursuit of the tiniest improvements, the big gains having all been made long ago. All they need over the competition is an edge. The 911 Turbo has been in competition with itself since 1975, or more accurately since 1995, because that was when the 993 version was introduced with four-wheel drive - and the 911 Turbo template as we know it today was set.

Perhaps there'll be big steps forward somewhere down the line as technologies evolve, but at this point, Porsche is chasing those marginal gains. It has been for some time. More track width here, a 12 per cent increase in power there, and a touch more downforce, plus revised steering calibration - Porsche's engineers are like a boxer, sweating buckets in the gym looking for that extra snap. That process describes how this 911 Turbo - a bit faster, a touch grippier, a shade more interactive - is a more complete car than the already mighty 911 Turbo that came before it.

But let's step back. This car's cabin will be familiar to any 992 driver, which means the seating position is excellent with a driver's seat that drops right to the deck, while the materials and the fit and finish are first rate. The infotainment system is very good, too. As ever, the 911 Turbo with its small but useful rear seats - as well as its unrivalled visibility and good ground clearance - is so much more usable than something like an Audi R8 day-to-day that the pair hardly seem like natural competitors.

At very low speeds around town, meanwhile, there is a toughness to the ride quality, although it only becomes tiresome on the worst surfaces. Once rolling along a bit quicker the ride improves until at motorway speeds, it becomes very supple indeed. You can tell by the way the car gently bobs its way along, never thumping or crashing, just skimming along the surface. With fat rear tyres and a boom box right above them in the shape of the rear portion of the cabin, 911s often generate significant tyre roar. This one does, too, but it seems better suppressed here than in other 992s I've tested recently.

In that composed ride and decent refinement you have the basis of a supremely capable long distance machine. Just send me the assignment and I'll drive this thing wherever you'd like me to. A McLaren driver would need to stop for fuel or a leg stretch far sooner than I will.

I had this test car for a few hours only, though, and I wasn't about to waste time fact-checking that last statement. Instead, I pointed the Turbo S towards a road I know well. Its surface is so poor the authorities should install barriers at either end and only lift them for enduro bikes and ATVs. Or maybe just resurface it. I've driven many performance cars along here that have been completely flummoxed by the unrelenting bumps and potholes and funny cambers. And the Turbo S? I couldn't believe how well it dealt with the riverbed beneath it, particularly given the firmness of the ride elsewhere and the modest wheel travel. It didn't skip or bounce along and it wasn't thrown off line. Its tyres were pressed firmly into the asphalt, the body was relatively calm and settled.

Or it was in the softest damper mode, at least. I didn't dare switch to a stiffer one. That was the first very positive sign. The second was the quality of the steering, which is not only far more connected than before but also mated to a front axle that changes direction like a ricocheting bullet. Even knowing the track is 42mm wider I can hardly get my head around how much more responsive the front end has become and how much more urgently it turns into a bend.

It isn't only the steering response that's improved, but the tactility though the wheel itself. Rather than being numb, this new Turbo S is actually communicative, so you enjoy the process of guiding it along a winding road far more. Bundle together its improved steering, a more neutral chassis balance, its very deft way of dealing with lumps and bumps and you have a nuanced, sophisticated performance car. This is so much more than a point and squirt machine. It's also got body control like you wouldn't believe, other-worldly grip and traction, astonishing stability at high speed and fantastically powerful and durable brakes. So it's enormously capable, but also more engaging to drive than the last one.

Does it feel faster? Incrementally yes, but it doesn't punch so much harder than 991-era Turbo owners wouldn't recognise its level of thrust. But my word, does it launch you along the road. What's most amazing is that the rate of acceleration doesn't seem to diminish as you haul through the gears. The engine also pulls to the redline around 7,000rpm without wilting even a tiny bit. The 3.8-litre flat-six doesn't do a great deal below 3,000rpm; overall it's less immediately responsive and less linear than the smaller twin-turbo Carrera unit. But I think that's the point: a 911 Turbo should feel distinctly turbocharged, while the Carrera motor ought to do the best impression of a normally-aspirated engine that Porsche can muster.

I also want a Carrera to sound tuneful. No one has ever bought a modern 911 Turbo for the sound alone and I'll bet my mortgage on that remaining the case. Mostly this new engine chuffs and flutters noisily like the heavily turbocharged torque monster that it is, but right at the top end, blowing through the optional sports exhaust, there is a touch of musicality about its soundtrack. The gearbox, incidentally, is phenomenally effective and the perfect accompaniment for the powerhouse engine.

I have no reservations about the car's drivetrain, then, but I do have something to say about its size. While driving on more constrictive B-roads, I realised my eyes were flicking out to the door mirrors to check my positioning more often than I've noticed in a 911 before. The latest Turbo is still narrower than mid-engined supercars like the Lamborghini Huracan and Ferrari F8 Tributo, but that old 911 thread-ability has gone. In truth, it had gone from the previous version. (As an aside, I think we should call out these incremental increases in width with each new generation, which seems to be an industry-wide trend. While a touch more spread from one generation to the next might not make a great deal of difference, over three or four generations a slim and wieldy car can become a frustratingly broad one.)

Now's the time - ball your right hand into a fist, extend thumb and forefinger, raise hand to chin and stoke. Is the new 911 Turbo S too powerful? Can you really dig into its performance away from a race track? Having thought about it a lot, I reckon it's more to do with personal preference than anything absolute. I think it's one for the comments section. But 'too much power' isn't fair, because the car's chassis and drivetrain can clearly handle it and, as the saying goes, the throttle pedal works both ways.

The fact is, though, you can't deploy this level of acceleration on the road for more than a few seconds at a time. You'll either get a kick out of doing exactly that, or be frustrated at not being able to do so for longer. That's for you to decide. The same also applies to just about every one of this car's competitors. All I can add is my own preference, which is for 911s that are slimmer, lighter, less powerful and less complex, and that have two fewer driveshafts and one extra pedal. But if I did happen to be more of a 911 Turbo person, this is one that I would long to own. It's the best four-wheel drive rocket ship for the road I've ever driven.