Surprise of the century - turns out the GTS upgrades make for an excellent Boxster as well!

On models like the Cayenne and Panamera, around 15 per cent of Porsche's sales are GTS models. That's its initial prediction for the Cayman/Boxster duo as well, but already that seems a little conservative. Given both are outright sports cars, why not plump for the fastest, most overtly dynamic model in the range? Furthermore, without turbocharged or GT models either, the case is even stronger for the GTS. 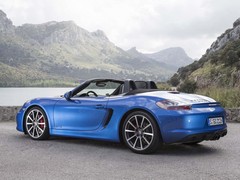 To all intents and purposes, the Boxster's GTS treatment is the same as that found on

; the only difference being the additional 15hp makes a total of 330hp rather than 340.

However, it would take a far more astute senses than mine to detect any accelerative difference. The figures show a couple of tenths here or there but the Boxster remains a very fast car. Five seconds to 62mph and over 170mph was 911 pace not that long ago, just in case that fire needs stoking once more.

The gearing is a little too long with the manual, which is a real frustration given how glorious that flat six is in the upper reaches of its rev range. Of course with the roof lowered the occupants are treated to an even more intense aural treat too. Occasionally it seems a little overexuberant but most of the time that flat six shriek is the perfect accompaniment to some spirited open driving. The exhaust can be turned off for slightly more discreet progess too. 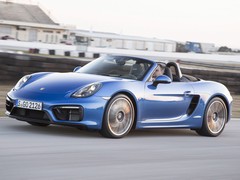 Probably good on track; Porsche didn't let us find out

Dynamically, the differences between the GTS pair are small yet tangible. The Boxster's steering loses a little weight compared to the coupe and the overall composure down a testing road is ever so slightly less. The Boxster is still a superb handling car and the differences are minor but driving the pair back to back does highlight the Cayman's slight superiority.

Overall, the conclusion on the Boxster GTS is much the same as the Cayman. For those considering a few options on an S (and according to Porsche, they typically leave the showroom with options worth 10 per cent of the RRP), a GTS could easily be justified. Those after an S bereft of options will of course not be disappointed either, apart from perhaps at trade-in time. 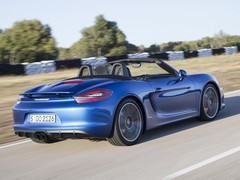 What's more interesting to discuss with the Boxster than the Cayman are the rivals. To drive, the Cayman makes the base

feel a little cumbersome, even if the Jag remains arguably a more covetable thing. A comparison with the

would surely prove fascinating as well.

But there's one more contender, one that isn't available just yet; the Alfa 4C Spider. With open cars typically more occasional than hard tops, could the Alfa's compromises be more easily tolerated? And with more development time, hopefully some of the dynamic foibles can be addressed as well. Now there could be a twin test worth waiting for.