No, not that Continental GT but a reinvention of a two-wheeled British classic 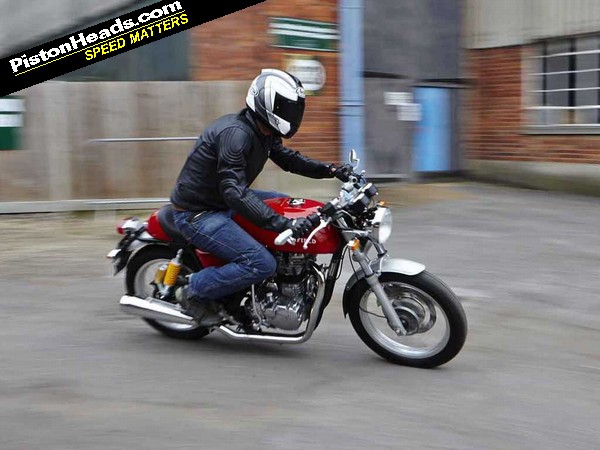 Not so many years ago the UK used to lead the way when it came to motorcycle production with names such as BSA, Velocette, Triumph, Norton and of course Royal Enfield. So, for those who are unaware of Enfield's history, here is a very quick summary of its rise and fall from grace. 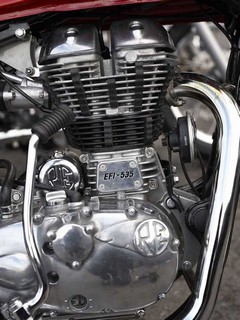 Single-cylinder thumper lives up to name

Formed in 1891 as the Townsend Cycle Company it initially supplied rifle parts to the Royal Small Arms Factory in Enfield, before building its first motorcycle in 1901 under the name Royal Enfield.

As the bike industry boomed through the first half of the 20th century, Royal Enfield became a household name, producing machines such as the iconic Bullet, before the collapse of the British bike industry saw it close its doors in 1967. But that wasn't quite the end of Enfield...

Throughout its life Royal Enfield had very close ties with India, supplying the Indian army with bikes in 1949 before becoming the country's first four-stroke motorcycle manufacturer in 1956 with an Indian subsidiary. So, when the UK factory stopped production, it was only a matter of time before Indian production filled the gap.

10 years after the last UK Enfield left the Redditch factory, Indian Bullets were being imported back into the UK. Then it all went a bit wrong, Enfield ran into financial issues and it was bought in 1994 by Indian firm Eicher Group, its current owner.

Eicher developed a whole new range of Enfields introducing electric start and left foot gear change in 2002 and a brand new fuel-injected motor in 2009 that was a 'unit' construction rather than the separate gearbox and motor design of the old engine. Ok, now we are up to speed, what's new about the 2013 Continental GT? 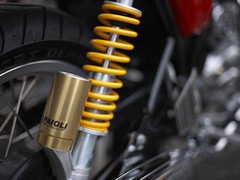 Back to the future.

You may not have guessed it, but just about every component bar the motor is new on the GT. Styled on the 1965 Enfield Continental GT (although not 250cc), the 2013 bike uses a larger capacity 535cc single-cylinder engine with fuel-injection, electric start (yes, there is still a kick-start) and left foot gear change. It is essentially the current Bullet motor with a bigger bore to up its power. Well I say up, the GT makes a somewhat limited 29.1hp with 32.4lb ft of torque, which makes it

friendly if not exactly a rocket ship. However while the engine appears somewhat limited, the chassis has some serious sporting credentials.

Designed by race paddock stalwarts Harris Performance, the tubular steel frame has been developed with performance in mind (well, certainly more than the engine can deliver) and as well as 41mm forks comes with twin Paioli shocks, Pirelli tyres and a single 300mm two-piston Brembo caliper. The styling is by another British firm, Xenophya Design, and it comes in any colour you like - as long as it's red. But there is another twist.

This year Royal Enfield aims to make 175,000 bikes. Yep, that's right, 175,000. The Eicher Group has just built a brand new factory and in India there is a huge waiting list for Enfields. But of those 175,000 bikes, only 5,000 will be exported. Which is where Royal Enfield is hoping the GT will step in. 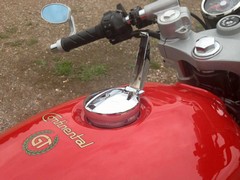 A classic name on the tank for retro chic

The GT is styled to tap into the burgeoning retro/cafe racer market. With Enfield's heritage, Eicher is hoping riders will buy the Enfield for the name as well as the look. But it isn't a British bike, it's an Indian one. And will that matter?

Certainly there may be some snobbery about the perceived quality. Looking at the Enfield from afar this doesn't seem a worry, however get a little closer and there are certain areas where the GT really lets itself down. The finish isn't brilliant and items such as the switchgear and fasteners look a bit budget. If the bike was itself cheap this wouldn't be such an issue, but at £5,499 the GT is only £1,000 less than the more powerful and better built (in Thailand) Triumph Bonneville. But does the Enfield's charm make up for it?

We test rode the Enfield from the Ace Cafe through London and out to Brooklands but from cold my bike stalled about four times before I had even left the Ace's car park. The GT has a choke lever, which isn't actually a choke as such and instead simply increases the revs. The problem is it doesn't stay on, it springs shut, causing the bike to stall. Call me picky, but I expect a 2013 fuel injected bike to be able to fuel itself without my interference. 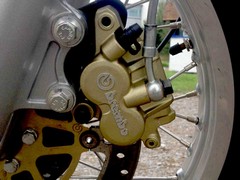 Braking not as impressive as hardware suggests

Once going the single cylinder engine gets on with the job in hand. The clutch action is light, which is nice, and the gearbox acceptable, however the power is certainly limited. Enfield claims just shy of 30hp but, despite sounding amazing through its fruity pipe, the GT doesn't feel quick. And then the vibrations kick in.

Get the motor above 5,000rpm and it vibrates like one of those objects that Ann Summers sell. I'm not averse to a vibrating single - I own a Velocette Venom - but the Enfield really does shudder like nothing else out there. Character? That's a decision only potential owners can make; personally I found it a little too intrusive. And the brakes are best described as adequate. They do the job, but lack any real feel and I suspect that they are built in Brembo's Indian facility (which usually brands things Bybre - By Brembo) and not quite up to the European spec items. But what of the chassis?

Here is the interesting part - the Enfield actually handles pretty well. You can sling it around and its light weight and decent tyres mean it is not a bad handling bike at all. Through traffic the GT was very nimble and once out of the congestion it dealt with the bends fairly well. I'm not sure Harris' input has had a great deal of impact but at normal speeds you can't criticise the GT too much. 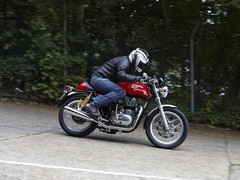 Jon gets into character with an old-school tuck

So, the big question, is the GT worth £5,499? The standard bike actually costs £5,199, however the higher spec on we tested comes with a single seat, race exhaust and bar-end mirrors for an extra £300. If you like the look, can put up with its quirks and aren't expecting much in the way of performance the GT is a good looking bike that should run and run. However, for my money Enfield hasn't moved the game on at all. When you look closely too many corners have been cut and the engine doesn't behave as a modern one should. I'm all for characterful bikes, but when I'm paying £5,499 I want one to be built well and work properly. If you are into Enfields, or just like the look, then the GT is certainly a very cool bike. It won't break down every time you want to take it for a ride or try and fire you into orbit via a kick-start. Charming as the GT was, though, it did leave me a little irritated at its lack of performance and budget components.