Would you have one over a hot Golf? Such is the Leon's existential question, before attempting to make sense of the combination of go-faster parts the great MQB platform randomiser has dispatched to SEAT. 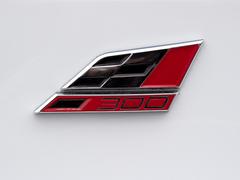 launched the reasons for answering 'yes' would have value for money; stuff VW made you pay extra for like the fancy VAQ not-a-diff torque vectoring front axle, multi-mode dampers and the rest made a strong argument, topped off with a symbolic (given torque was the same) on-paper power advantage.

Against non-group rivals the Cupra reaped the benefits of VW's investment in the MQB platform, including a mult-link rear axle where rivals like the Honda Civic Type R, Megane Renaultsport and Peugeot 308 GTI made do with more basic twist beams. Chuck in the option of Brembo brakes, Cup tyres and other hardcore upgrades with the various Performance Packs and there was a pick'n'mix hot hatch of some quality.

Which is a long way of saying, yes, the Cupra looked a little underwhelming. But you were getting a pretty sweet deal. Since then things have got a lot more complicated. VW put SEAT back in its box and went Nordschleife glory hunting with the GTI, pushing the SEAT hard for hardcore cred. And all the while the Golf R sat atop, a small financial stretch away but with the extra power, the four-wheel drive and the 'faster than a GT-R in the real world AND I got a great finance deal' internet glory. Post facelift the Golfs have since gained fancier Audi-style 'virtual cockpit' dashboards and a bit more power, the GTI going to 230hp (245hp for GTI Performance) and 310hp for the R.

This is the response - 300hp from 290hp, Golf R equalling 280lb ft from the previous 258lb ft, tenths here and there off the 0-62 sprints depending on bodystyle and gearbox and all-new 4Drive version of the ST estate. Promising. But only if the pricing stacks up against that ruddy Golf. Before we get lost in the numbers let's see how it drives though.

Much like the old one, basically. There has been some fettling of the damper specs and general recalibration of the various controls, including shift maps for the DSG versions. Peak power comes 400rpm sooner and torque 100rpm later and it shares the Cupra 290's updated exhaust system but the character of the EA888 turbocharged 2.0-litre is fundamentally the same. Ditto the artificially 'enhanced' drone.

Also carried over is the slightly more raw and uncouth deployment of that firepower. Generously you'd say this suits SEAT's image as being the more 'emotional' end of the VW product portfolio. In the way of things these days you can pick from a host of settings for dampers, steering, 'diff' and the rest, Cupra mode giving you the Jordi Gene, 'ring lap approved settings while Individual lets you mix and match for a more nuanced approach. 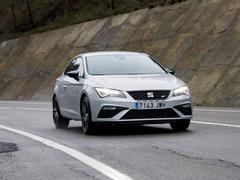 Well, relatively. Because there's not much nuance in the way the Cupra puts its power to the road. As in other applications the engine spools up quickly and aggressively, asserting itself over the torque shuffling front axle in a variety of ways. Not all of them pretty. The lead-footed may enjoy the brutal nature with which the front tyres scrabble for traction and the lively to-and-fro as power switches from one side to the other. On wet or dry roads this often results in an unseemly fight and pretty violent axle tramp through the first three gears, lunges to one side of the road or other also part of the fun. If you think the looks and paint palette are (still) a little on the conservative side the power delivery most definitely isn't.

Arguably SEAT needs something to set itself apart from the more sensible German MQB products. And if you like things to 'feel' fast and exciting you can certainly get your kicks at the wheel of a Cupra - just don't expect a whole lot of appreciation from passengers or the outside world.

On a sodden track and wearing pre-worn Michelin Pilot Sport Cup 2 tyres the Cupra is, frankly, a bit of a handful. Switching the ESC off completely does at least break up the fisticuffs between the front axle and the stability control, letting the torque distribution do its best to pull things back into line. But there's still a lot of wheelspin.

Short-shifting to utilise the meat of the mid-range and a more nuanced application of the throttle does make the performance a lot more usable. Here the manual is a definite advantage, the ability to assert yourself over the gear choices giving you more options on how to play the power delivery. And if you calm your inputs the chassis reveals sophistication and balance you'd hope for, given the multi-link rear axle and the advantages in wheel control and the rest over a regular twist beam. A greasy track and those worn Cup tyres reveal real balance and adjustability too, trailed brakes letting you swing the rear end around to the degree you need and get the front axle pointing where you need before unleashing hell. Which is a much more effective way of dealing with understeer than trying to claw your way out under power. It doesn't dance like a Megane and it doesn't have the locked down BTCC car composure of a Civic Type R but there's a sense of the Golf GTI Clubsport's friendly adjustability there and proof there's more to the Cupra than teeth jiggling axle tramp and lurid power understeer. 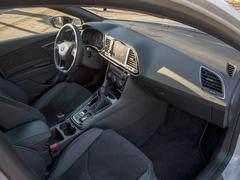 If you appreciate such subtleties the Performance Pack (not yet on the pricelist but coming soon) adds the serious looking Brembo brakes, different wheels and a choice of Black or Orange trim packages. It'll set you back £2,125 and £2,350 respectively, the Cup 2 tyre option an additional £600. The latter is worth it if you have ambitions of hitting the track while the Brembos add both bling and a much nicer brake pedal feel without the grabbiness of the standard set-up.

Would you have it over a hot Golf though? Image and brand snobbery are personal choices but it's hard to dispute the VW is a much, much nicer environment than the SEAT. The Leon may have much of the same kit but the design and finish seems deliberately downplayed. Which wouldn't be a problem were it not for the fact a basic three-door manual Golf GTI is nearly two grand cheaper than the equivalent Leon SC. Upgrading the VW to Performance spec and DCC dampers for a more direct comparison levels that playing field but, even like for like and with a 55hp power advantage, the SEAT is struggling.

Bottom line prices are, of course, of less concern given the way most people 'buy' their cars these days. And there is pace, character and substance in the Leon - plus a definite rawness - that will appeal to those who like their hot hatches properly hot. But even so SEAT's greatest asset - access to VW's kit and economies of scale - may also be its greatest weakness though, given comparisons to posher-badged relatives are never going to go well without a significant cost advantage or a decisive performance bung. Neither or which the Leon has, even in this uprated form.