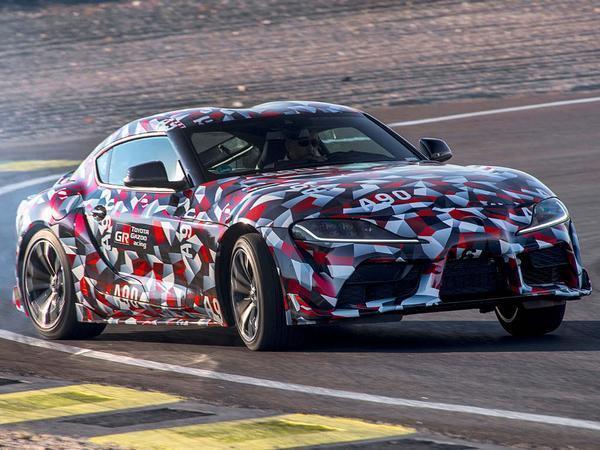 Do we know much more about the new Toyota Supra yet? Officially, no. It's still eight months or so from production, so hidden inside and out until January, there are very few released numbers.

Those that have been released include that the new Supra, which shares its architecture with the upcoming BMW Z4, has a 50:50 weight distribution, a 3.0-litre straight six petrol engine, turbocharged, driving the back wheels through an eight-speed auto gearbox and limited-slip differential.

Despite the engine's intrinsic tallness compared to the flat-four in a GT86 Toyota says the centre of gravity is lower here, while the body's torsional rigidity, despite being steel and aluminium and with not a hint of carbon fibre in it, is higher than a Lexus LFA's. More numbers will come when the car is unveiled at the Detroit motor show in January.

Before all of that, though, we've had a go in a pretty late stage prototype, dazzle camo'd outside and bagged over the obviously-BMW switchgear inside; and with a minder in the passenger seat at all times.

That means I can't lift the lid on the drapery and see where the BMW stuff stops and the Toyota stuff begins, but there's iDrive, BMW column stalks and gear selector and heating and ventilation switches, and a very BMW feel to the driving position too - low and straight - but a Toyota-face on the instrument binnacle.

The window line is high and you're looking through a letterbox windscreen, a bit like in an Audi TT, with the curved body around you heading off unseen into the distance. A Porsche 718 Cayman therefore feels smaller than this, I think, which presumably it is. No word on that either, yet, although the track is around 1600mm and the wheelbase approximately 2440mm.

Get under way and it's pretty clear where the engine and gearbox comes from, too. The BMW straight six is so smooth, revs easily and never seems to mind doing it. I'd guess at 340hp and 350lb ft, driving through a ZF automatic 'box.

There's a bit more induction noise to be gleaned before production, says Toyota, but a flap in the exhaust if you enter Sport mode - which firms up the steering, dampers and drivetrain response of this car - makes the note harder.

Standard Supras will have passive dampers and Toyota would like a manual 'box at some point too. I suspect more versions, slower and faster than this one, so it's clear the drip-feed of info won't stop even when the 3.0 goes on sale next June, at around £50,000.

On adaptive dampers it rides well, better than a BMW M4, say, whose tyre sizes are similar: there are bespoke Michelin Pilot Super Sports of 255/35 R19 at the front and 275/35 R19 at the rear. The weight is approximately 1500kg.

Toyota says 90% of development work has been on the road, with 10% on the track, and that's how the Supra's bias feels too. There's a good underlying compliance to it, and with very smooth steering, and the inherent stability of a front engine, it feels more mature than, say, an Alpine A110, while I'm sure it's more pliant than a BMW M2 Competition.

On a country road, though, you can begin to push the boundaries of the standard suspension settings. Some sharpness to the steering around straight ahead enhances the car's natural handling balance, but because of where the engine is, the Supra's maturity will never have it feeling quite as agile as an A110 or 718 Cayman. I think an M2 Competition feels more alert and precise, too, owing to how its tied down.

Stiffen the Supra's dampers, though, and body control tightens well without destroying the ride: this is one of those cars whose engineers, not marketing execs, seem to have been left in control of how harsh the buttons make things. There's a pleasing, reassuring handling balance to the Supra in its sportier mode. It feels a bit Aston Martin Vantagey; a bit of understeer on the way in, a bit of oversteer on the way out. GT car imitating sports car well, rather than being out-and-out sportster.

On the same road - owing to the minder and that there were two journalists to a car - I was sometimes following in a Toyota GT86. Toyota has said it would like the Supra to feel like a bigger '86. In its inherent balance it does. But getting into the much lighter car you remember the advantages of the fact that it's more than a quarter-tonne to the good.

On a circuit, where we get a good few laps with stability control set to half-off, it's clear that the Supra's chassis can handle more power, and that its balance is terrific. I drive all of that with the suspension stiffened, but there's still compliance over bumps and kerbs.

It doesn't rotate on turn-in as willingly as, say, a Cayman or, from my limited experience, an Alpine A110, but that's not surprising given where the engine is. There's enough power to feel it beginning to straighten the car on corner exit, but what happens beyond that will have to wait until another time. Body control's tight, though, and the people behind the '86 are behind this so I suspect it's a giggle when it lets go.

Half a dozen laps or more later, though, it still feels happy on a circuit, having not worn through its steel discs, and offering good playfulness the more you push it. It's a mature daily car that is far from out of its depth on a track.

Four years ago you wouldn't have thought anything could go up against a 718 Cayman and beat it. But pretty soon it'll sit in a class that also includes the Alpine A110, BMW M2 Competition and this new Toyota Supra. The Cayman could yet be anywhere between first and last in that company. I'm not sure we've ever had it so good.