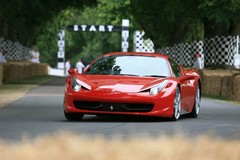 There is a chance that Ferrari shares could be offered to the public by 2014, according to Fiat CEO Sergio Marchionne.

But before you get excited about the possibility of hanging a little piece of Ferrari stock on your wall, it should be worth mentioning that this is not Fiat's preferred aim. What Marchionne and Fiat really want is to return to Fiat its historic 90 per cent stake in the Prancing Horse.

Fiat currently owns 85 per cent of Ferrari; it sold 34 per cent of the company to Italian merchant bank Mediobanca in 2002, but has bought back all but 5 per cent of its original stake, which now belongs to Abu Dhabi investment company Mubadala.

But in new documents detailing the planned separation of Iveco trucks and Case New Holland tractors from Fiat's car business, Fiat revealed that it was now after that 5 per cent of Ferrari owned by Mubadala.

It's easy to understand why the newly slimmed-down Fiat Auto S.p.a. is keen to get hold of as much of Ferrari as possible, too. A recent report by Morgan Stanley valued Ferrari's business - which produces 6000 units a year - at 3.1bn euros (£2.62bn), while Fiat Group Autos was valued at just 3bn euros (£2.5bn) - while shifting 2.15 million units.

But it's that high value that might just tempt Fiat to float Ferrari - it could generate huge amounts of cash that way. Fiat has no official plans however, but Marchionne told reporters that he would not exclude the possibility of offering Ferrari shares to the public saying that "on such a long time frame, I cannot exclude anything".