So, farewell screaming normally aspirated V8s in mid-engined Ferraris. Yes, the Ferrari 488 GTB making its debut at Geneva and replacement for the much loved 458 Italia will be turbocharged. Muttering into your beard about the end of an era and technology spoiling the fun? You might want to pause when you hear the stats - 670hp at 8,000rpm for starters, 100hp more than the 458 and 65hp more than the Speciale. Or how about 560lb ft of torque, up from the standard 458's 398lb ft and now yours from 3,000rpm rather than the 6,000rpm. More numbers? OK, try 0-62 in three seconds dead and 0-125mph in 8.3 seconds - eight tenths faster than a Speciale. Eight tenths! Top speed is 209mph or thereabouts and the 1min 23sec Fiorano time is half a second quicker than the Speciale too. 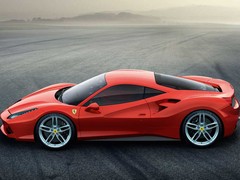 Side vents apparently inspired by 308

Still not convinced? Let's look back at the last time Ferrari put turbos into a mid-engined V8 Berlinetta and ponder the heritage of the 288 GTO and the F40 it spawned. Yeah, forced induction Ferraris are so dull aren't they...

If that outright performance gain isn't enough for you consider also that the 488 GTB has active aero, a blown rear wing and combines 50 per cent more downforce and reduced drag. Putting that power to the road is a gearbox we'll presume is based on the familiar dual-clutch seven-speed unit (Ferrari doesn't say) featuring Variable Torque Management which "unleashes the massive torque smoothly and powerfully right across the rev range" as per the turbocharged California T.

The 488 also features an "evolved" version of the Speciale's supernatural Side Slip Angle Control - Ferrari's face saving technology that allows even the ham-fisted look like driving gods thanks to its management of the F1-Trac stability control and E-Diff. SSC2 now works with the active dampers too, Ferrari tactfully saying it gives "track-level performance that can be enjoyed to the full even by non-professional drivers in everyday use." 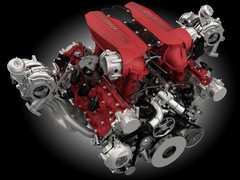 V8 now with turbos and much more power

Meaning, basically, Ferrari has simply raised the bar for the level of muppetry required to wrap the 488 round a piece of Mayfair street furniture. How long before an owner obliges with a demonstration? Place your bets...

Moving swiftly on, consider also that even with all this additional tech the 1,370kg 488 GTB weighs 10kg less than a standard 458 Italia, albeit with the caveat that Ferrari's quoted weights are always recorded dry and as the small print reveals "with lightweight options" fitted. The initial press release doesn't mention construction materials but Ferrari has previously stated its intention to stick with aluminium spaceframes for all but LaFerrari-grade specials. At this point you'll be looking for the inevitable comparison with the all-carbon McLaren 650S, the coupe version of that car starting at 1,330kg dry. 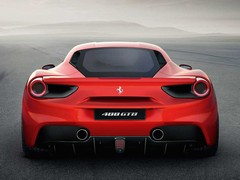 The adoption of turbos may be considered by some as a dilution of the character that made the contest between the McLaren and Ferrari V8s so compelling. Boosty, whooshing McLaren or screaming, hot-blooded Ferrari - each brilliant in its own right and making for one of the great supercar rivalries of recent times. To remain competitive in important markets like China Ferrari needed to go sub 4.0-litre - the McLaren is of course a 3.8 - and turbos were inevitable; you can be sure much effort will have gone into making the 488 sound as good as the 458 and Ferrari promises "a new soundtrack that is full, clear and totally distinctive."

This, of course, leaves the 5.2-litre V10 Huracan as the last bastion of big capacity naturally aspirated power in this class. A rebellious USP that plays well to Lamborghini tradition if not sales potential in those markets with punitive taxes on big engines.

With this, the Porsche 911 GT3 RS, Aston's track-ready Vantage GT3, a much-updated Lotus Evora and (no doubt) more besides Geneva is shaping up to be a vintage show for lovers of fast and exotic motors. Don't forget McLaren's offering too, the new 675 LT featuring a provocative 5hp of additional bragging rights over the new Ferrari in a high rollers' game of Top Trumps we can all enjoy.

Cupra Leon estate on sale in the UK