Ford Focus RS - the inside line

Ford development team explain all about the 4WD system and more 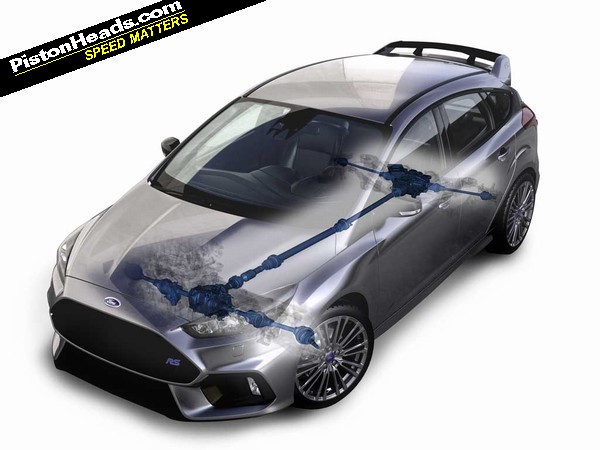 When we wrote the initial story about the

, we only had a brief document from Ford to go on. Now we've been to the flashy unveil at Ford's factory in Cologne, watched Ken Block pirouette a prototype around the factory floor, seen the car and - crucially - spoken to the people who built it. 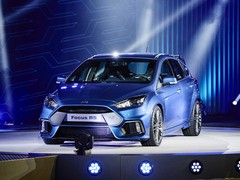 Cologne unveil was a big event

We had a LOT of questions, many related to the all-wheel drive system and its torque-vectoring cleverness.

To recap, the Mk3 Focus RS will be powered by a 2.3-litre turbocharged version of the Mustang engine (now making "well in excess of" 320hp, an upgrade from the original "more than") and channelled through a six-speed manual gearbox.

But it's this torque vectoring on the rear wheels that's behind the great leap forward over the Mk2 RS, Ford assures us. "It transforms this car into something that will stand out among the competition," Dave Pericak, the guy running the new all-encompassing Ford Performance department, told us.

Torque vectoring essentially helps the car round corners, and if you're understandably a bit hazy on how it does this, think of it like paddling a canoe (stay with us here). Many brands make a song and dance about torque vectoring but most of the time it's by braking. Which in canoeing terms is like turning your boat by paddling backwards on the side you want to turn - it gets you round but slows you down. Active (or dynamic in Ford speak) torque vectoring works by pushing more torque to the outside wheel, which in canoe-speak means paddling harder on the opposite side to the turn direction. You don't slow down. 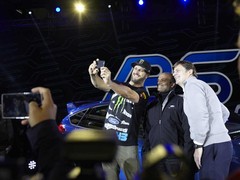 Who wouldn't want a Block selfie?

This is rare and pretty smart of Ford. Because actually the AWD element isn't that exciting. It is after all that basically a Haldex-type system that is front-wheel drive in most situations. And if we are being honest it was crazy of us to expect anything else in a car with a transverse mounted engine, engineered in its cooking variety to be FWD and nothing else.

Yes, it can send 70 per cent of the power to the rear wheels but the trick bits are the two electronic clutches that can send 100 per cent of this to one wheel or the other, which is claimed not just to eliminate understeer into the corner but also improve lateral acceleration beyond 1g. Ford's head of global engineering, Raj Nair, explained it to us like this.

"With all-wheel drive the normal advantage is tremendous exit acceleration out of the last third of the corner, but sometimes you lose that crispness in the entry of the corner and when holding that speed at the apex," he said. "With torque vectoring we can really improve turn-in, and really improve that crispness to the apex. You also get this capability to actually drift the vehicle". 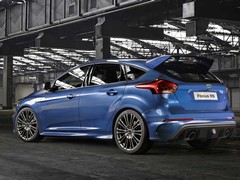 Some boasting here. Firstly the company that supplied the torque vectoring is British, GKN Driveline. British innovation at the heart of a global performance icon: gives us a warm glow. GKN also supplies BMW with its Dynamic Performance Control on the X5 M and X6 M and Pericak told us it's essentially the same thing here. And secondly we predicted Ford would

use this GKN technology

Pericak assured us that power wouldn't just be sent to the back when the rear wheels lose grip. He also told us briefly about differing driving modes that tap into the torque vectoring as well as other parameters. "Depending on the modes the driver selects will depends on how much fun we want to give you," he said. "One mode will allow you to have quite a bit of fun with the car..." There's a Ford pdf explaining it all here. 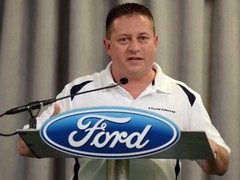 We got blank smiles when asked about performance figures and price (all TBA we're told), but despite the trickery this is Ford we're talking about here so the price might not climb too far past £30,000. For a start the bonnet, the wings, the doors, the boot lid are all standard Focus parts. Only the bumpers and side skirts are new (and the rear wing obviously). If the standard body panels look more aggressive then it'll be the down to the depth 12-coat blue paint used that Ford is trying to productionise without needing quite so many coats.

We did discover that Ford will start selling this car by the end of this year, rather than next year as initially hinted at. We were also told the "burbles, pops and crackles" engine note promised won't be artificial. No one would boast it'll crack five seconds to 62mph, but you'd have to assume that was the goal.

The benchmark cars according to Pericak where the Subaru WRX, VW Golf R, Mercedes A45 AMG and the Mitsubishi Evo. Next to them the RS is going to "shine". "When you get out of this vehicle you're going to have the biggest smile on your face for the longest amount of time," he promises. Bagsie we go first.