Earlier in the week (see below) we reported the SEAT Leon Cupra 280's headline-grabbing sub eight-minute Nurburgring lap was achieved in a car fitted with a Performance Pack not yet available on production cars. Meaning, strictly speaking, the Cupra you can buy wouldn't be capable of the same feat.

Assuming you wanted one that was here's the full information on that Performance Pack spec. First up, the 'ring car was stripped of its air-con system in what we can safely assume was a weight-saving exercise curiously not mentioned in the initial press release celebrating the record. This subsequent disclosure does mean SEAT is honour bound to offer that choice to Performance Pack buyers too, even if it expects few to go that far. 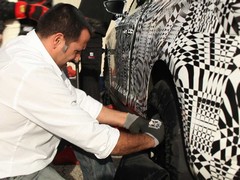 New wheels, brakes and tyres and no air-con

SEAT has also confirmed details of the wheel, tyre and brake package fitted and to be included in the Performance Pack. The record car had to run on Mk2 Cupra 19-inch wheels to clear the Brembo brakes, which run four-pot fixed calipers clamping 370mm discs at the front. Standard brakes are single pot sliding calipers and 340mm discs, the rear brakes the same on both. Homologating a new 19-inch wheel for the customer pack is one of the reasons it's not available yet. Wheel offset and tyre size (235/35R19) remain as before but the Bridgestones or Pirellis of standard cars are replaced by the Michelin Pilot Cup Sport 2s. There were no further modifications to the chassis, engine or any other parts of the car.

SEAT expects to have the pack ready for sale before the end of the year with UK pricing and availability to be confirmed.

Meaning if you absolutely, positively have to have your Cupra in full 'ring record spec and truly live up to that hype you'll have to wait, tick the necessary box and then source some Mk2 Cupra alloys for the finished look. And explain to your no doubt awe-struck passengers that sweaty pits are the price to pay for ultimate Nurburgring credibility, all the while hoping Vauxhall doesn't run the Astra Extreme round there any time soon and steal the record for its own ends.

Whether or not any of the above actually matters diddly squat to anyone beyond Nurburgring anoraks is something for the already lively discussion thread below... 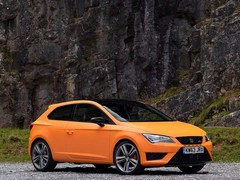 Our story about the

of the Nordschleife for a front-driven car was one of the most eagerly discussed from Geneva last week. Of course any story about 'ring lap willy waggling inevitably prompts strong feelings, be that on whether or not the car used is representative of the one you can actually buy or, indeed, the whole validity of lap times to the cars we drive.

Following that initial announcement there's one aspect of the SEAT's lap record that stands further scrutiny, prompted in this instance by a tip off from what we'll describe as 'an interested party'. Namely the press release announcing the record said it was achieved in a car fitted with an optional Performance Pack. An optional Performance Pack you can't actually buy, the small print admits. Or not yet, anyway.

Officially this mythical pack includes - includes - Brembo brake calipers, 'specially designed' 19-inch wheels and Michelin Pilot Cup Sport 2 tyres. Whether there is anything more to it, how much it'll cost and when it'll actually be offered is something we asked SEAT. 'We'll get back to you on that...' was the gist of the response. 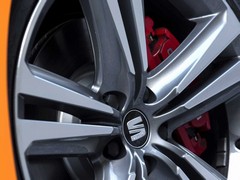 Standard brakes not up to job of 'ring records

Cupra 280s already get a 19-inch 'upgrade' (discuss...) over the 18s of the SC-based 265 option and the cars we drove on the launch event were fitted with 235/35R19 Bridgestone Potenzas. The 280 also gets red brake calipers but, as you'll see, they're of a sliding design rather than the presumably fixed Brembo unit that comes with the upgrade.

There's no suggestion that you won't be able at some stage to buy a Leon Cupra in the same spec as the 'ring record car (camo wrap may or may not be offered...) but, for whatever reason, the one you can buy right now won't be capable of that sub-eight time out of the box. Just in case you were planning a trip to Germany to demonstrate this feat to your mates.

We'll update you on the price and availability of the Performance Pack as soon as we hear back from SEAT.