In-car with Rafaele de Simone for the full 'hot lap' 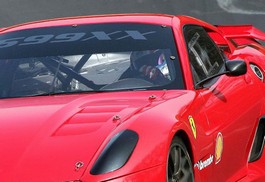 The lap, shown here in full, gives Ferrari a claimed 'production-derived' sports car record at the classic Nurburgring old circuit, although the time has already been beaten by Radical SR8 which clocked 6min48sec last year.

Ferrari's view, apparently, is that despite being road legal the SR8 is basically a spaceframe racing car so it's time doesn't count - although as there aren't any hard and fast rules as to what 'production derived' means in the context of 'Ring records, debates around the issue are likely to rage forever.

Still, even though the £1.2m (if you could buy one) 599XX is a rolling laboratory with 722bhp on tap and more advanced technology than your average space mission, we're not about to knock the effort. 'Forza Ferrari' and all that!