V6 and 2021 confirmed for McLaren hybrid 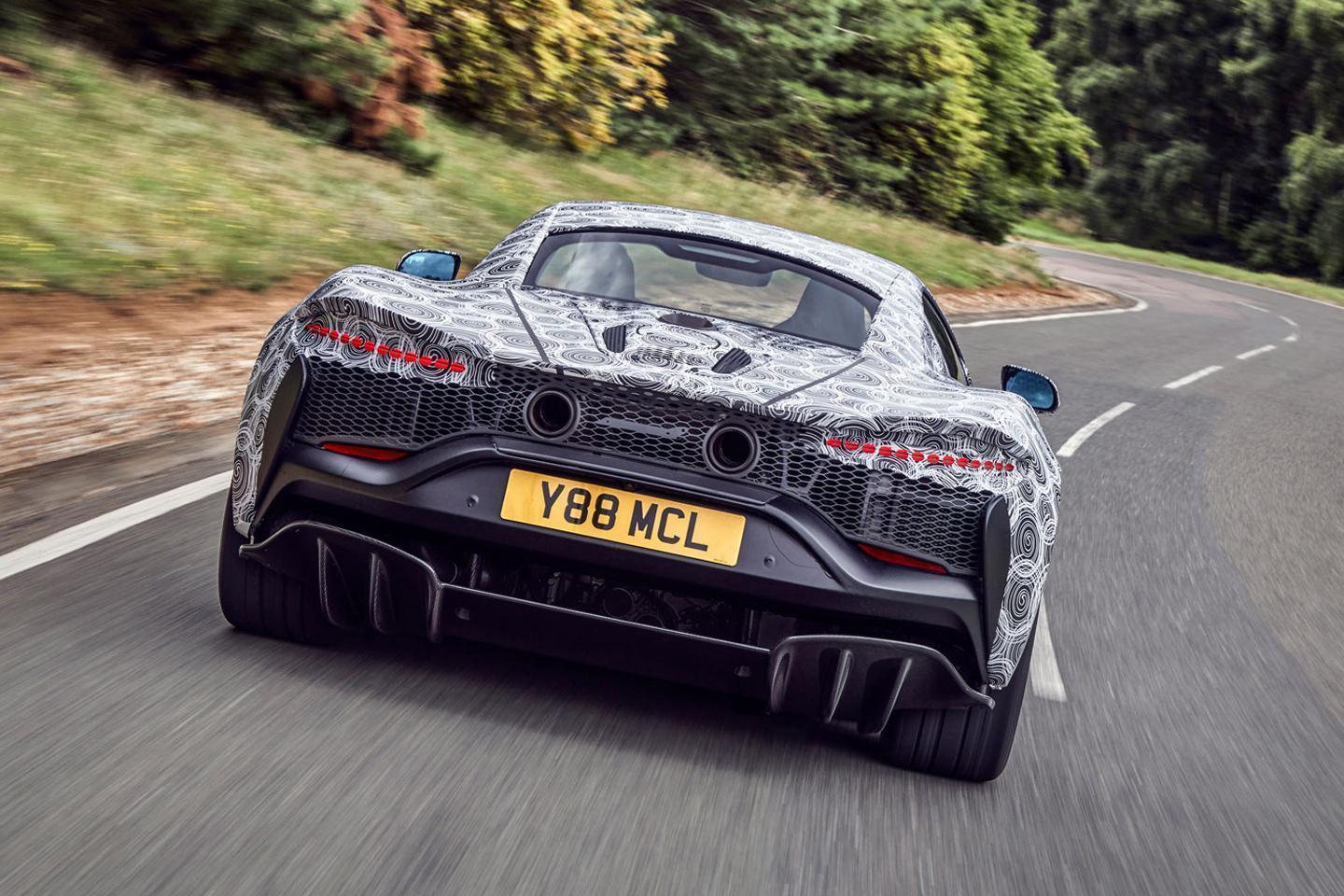 McLaren’s confirmation of an all-new turbocharged V6 powerplant for its 2021 hybrid supercar has been a long time coming. The 'High-Perfomance Hybrid' is a victim of coronavirus, its delayed development high on the list of its manufacturer's concerns. But now it has committed to a new schedule and reaffirmed that its arrival will signal the end of Sport Series production. It could hardly be more clear cut: out goes back-to-basics (relatively speaking) McLaren performance machinery, in comes high-tech, Carbon Lightweight Architecture-based stuff for the 2020s.

The new machine and its ‘flexible’ chassis won’t directly replace the Sports Series’ 570S, 600LT or 620R; the suggestion is that it’s being developed with a broader range of talents. Indeed, McLaren has confirmed that its V6-based powerplant will have a pure EV mode to satisfy urban requirements, while also being much lighter than we might expect thanks to cutting edge chassis construction tech. McLaren said the CLA structure “will underpin the next generation of McLaren hybrid supercars”, so we’re expecting a range of High-Performance Hybrids.

“This all-new McLaren supercar is the distillation of everything we have done to date; all that we have learned and achieved,” said Mike Flewitt, McLaren Automotive CEO. “This is a new kind of McLaren for a new era, an extraordinary drivers’ car that offers blistering performance as well as an all-electric range capable of covering most urban journeys. We see this new McLaren as a true ‘next generation’ supercar and cannot wait to show it to customers.”

Before the new PHEV arrives, McLaren will wave off the Sports Series with production of the 620R, the ultra-honed and GT4-inspired two-seater that’ll be the last to use the twin-turbo 3.8-litre. The hybrid V6 that will succeed it is expected to land with a power output comfortably in excess of the top Sports Series model, although it seems likely that other iterations will eventually be produced to indirect succeed the 570S and - leet's hope - the 600LT. Adequately replacing that car with a hybrid of any stripe will be McLaren's challenge for the next decade...

The far-reaching consequences of the UK's lockdown have meant that the reveal of McLaren’s first plug-in hybrid model is now on hold till the first quarter of 2021. A company spokesman confirmed this to PH in the aftermath of comments made by CEO Mike Flewitt, in which he conceded that the pandemic had, "interrupted our momentum."

Speaking to Automotive News, the McLaren boss said: “This will have cost us probably two years. (In) 2020, we’re going to do very little. I think it’ll take us the whole of ’21 to climb back (to) where we are.” While the 765LT and Elva remain on course for market launch this year, the temporary cessation of development work during the shutdown has significantly impacted the all-new PHEV. As such, its market launch has also fallen back by “a handful of months” according to McLaren's spokesperson.

The explanation for the 765LT and Elva’s less affected schedules relates to their use of existing bases and powerplants. Both the 765LT and Elva use running gear from the 720S, albeit with substantial modifications. But the PHEV model – billed as a successor to the 570S – is a ground-up newcomer, due with a turbocharged V6 engine that’ll come mated to all-new hybrid hardware.

Not only is the job of getting a never-before-used technical setup like this to production substantially more complicated than retuning an existing base, the 570S will also be built at higher volume - and brings with it all the developmental headaches of a PHEV. Doubtless the work required to ensure a seamless operation of the two-part powertrain in all circumstances is labour-intensive - not to mention all the painstaking work which must be done elsewhere to guarantee a successful launch.

As such, despite seeing McLaren’s PHEV prototypes out in Britain and on the continent on numerous occasions, there’s clearly more miles of testing left to run before the upcoming sports car – which is expected to have around 21 miles of pure EV range – can be signed off for the market. On the bright side, it seems McLaren is over the hill as far as coronavirus challenges go, with the same spokesman explaining that not only is testing recommencing, but “dealers are [also] already opening for appointments”.

Apparently the firm has “turned the corner” following the challenges of lockdown, which is encouraging news given widespread reports of the firm's financial difficulties, including the potential mortgaging of McLaren’s historic car collection and Woking HQ. Times have been tough, but there’s still a plug-in hybrid light at the end of the tunnel…

McLaren's future hybrid Sport Series model has been spied in development form wearing what looks to be its own bodywork for the first time, illustrating just how drastically different the plug-in 570S successor will be both aesthetically and technically. The future PHEV is due with a hybrid V6 powerplant in place of the blown 3.8-litre V8 of today’s entry models, a change that should enable a substantial boost in performance and efficiency in the fight against Porsche’s 911 Turbo S.

It’s also required a complete rethink for under the skin packaging and exterior design, as shown by the carbon-tubbed prototype’s visible panels. There’s a clear 720S influence up front and a bit of GT in the rear, while other areas – such as the rear haunches – sport peculiar, never before seen details. Those archtop vents could well be for battery cooling; in fact, it looks like the entire rear end is to be far more ventilated than before.

An image of the car’s instrument cluster also shows the drive modes, which include the conventional Sport and Comfort with a new Electric. Judging by the battery range displayed on the screen, McLaren’s PHEV looks on course to have around 21 miles of engine-off running. The electric part of the powerplant is, of course, also there to make up for the loss of punch triggered by McLaren’s reduction in engine capacity; expect peak output to easily surpass the 570S’s 570hp.

The V6 will be turbocharged as well, with what looks to be around 8,000rpm of rev range as far as we can make out from the dash image. Today’s twin-turbo V8 peaks at 7,500rpm, so that certainly makes sense, but with the electrified boost the V6 powerplant ought to feel most advantageous from lower revs and through the mid-range. The Ricardo-built eight-cylinder has always provided class-leading punch, but it’s never been the most responsive when out of its power band. Instant electric torque should help quell that in the Sports Series PHEV.

While it’s likely much of the test work going on at the moment is centred around that all-new powertrain, the inevitable weight gain and complexity of the hybrid system will also give engineers plenty to work on when it comes to the car’s controls. The Woking firm’s sports and supercars have established themselves as some of the best handling in the business, and with hydraulic steering and beautifully judged brake pedals in most models, they’re often the most communicative, too.

Suffice it to say, engineers will have a lot of details to address before the car is launched, probably sometime later this year – assuming all returns to normal, that is…

McLaren engineers have been spotted in the wild for the first time with a next-generation Sports Series prototype - the electrified successor to the 570S, and the bedrock of the manufacturer's future lineup. Clearly the current car provides the exterior bodywork, but underneath we're expecting a new Sheffield-built bespoke carbon-fibre tub, compatible with hybrid running gear and as-yet-unidentified petrol engine.

Helpfully, McLaren has stuck decals on the side confirming that the mule is electrified, with MV614 designating its internal project title, as per McLaren tradition. We don't know much about the specification beyond that - trade plates prevent further prying into the prototype's configuration - although two things are for certain: Woking's relationship with engine builder Ricardo continues, and you can bet your mortgage on the power output exceeding the 570hp currently delivered.

Whether or not the future model retains the 3.8-litre variant of the V8 is open to speculation. It's possible that McLaren will seek a downsized engine as it pursues efficiency gains and a lower kerbweight. A speculated move to six cylinders remains unconfirmed, although that would certainly draw a clearer distinction between Sports and Super Series cars. Elsewhere the influence of big brother is expected to be tangible - not least because there's what appears to be a downscaled 720S visible in the new digital instrument cluster.

The Super Series model has some of the most advanced aerodynamics in the business, so a similarly aggressive nose would point to a significant boost in downforce and aero efficiency in the Sports Series model. It'll need it, of course, with spy pictures of the upcoming 992 911 Turbo suggesting Porsche has also given its high-performance sports car a sizeable increase in air workload. That car is expected with 600hp - providing McLaren with yet another power-to-weight ratio benchmark. Expect Woking's contender to go on sale next year.

Search for a McLaren here