We got in a pickle over this: is the original Mini Cooper S with John Cooper Works GP Kit (full title) really a contender for

status, or should I be asking you to 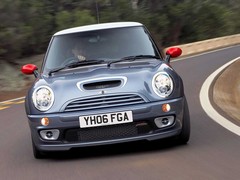 Period reviews of the car - the celebratory run-out model for the first-generation BMW Mini - typically enthused over the driving experience but pouted about the chintzy looks and the £22K asking price. Six years later a

, sticking to the same, stripped-out two-seat formula but now costing almost £29,000. That makes the original car look like a bargain, but how does the drive stands up?

Combat ted?
I borrowed BMW UK's own 11,500-mile timewarp example for the drive home from 2012 Paris motor show to find out. Sitting defiant among the concrete columns and florescent light of an underground car park, the GP bristles with immediate purpose. The bodywork addenda and red accents at once faintly ridiculous and endearing. 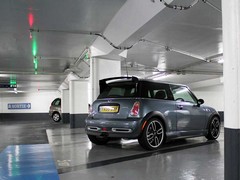 Mini's own GP Works has just over 11K on it

This is no teddy bear underneath the combat gear. We're all familiar with the GP's boxy spoiler, lightweight 18s and strut bar substitute for the back seats; what's less well remembered are the bespoke aluminium control arms at the rear - gorgeous, and plainly visible through those wheels. It was assembled by Bertone in Italy, and although its 218hp was only 8hp up on the existing JCW variant, it was still more than contemporary Mini Challenge racing cars.

Arrested development
With total weight savings over 50kg (where buyers didn't option back the no cost air con), a proper limited slip differential, 10mm ride height reduction and fettled engine, it has all the makings of a proper pocket rocket. Starting it for the first time in a subterranean car park, the aural impact is every bit as bold as its optical clout - the whine and fizz from the supercharger seems more superbike than supermini, and it's almost impossible to resist indulging the snap of the delivery to exacerbate the way the exhaust merrily crackles and pops. 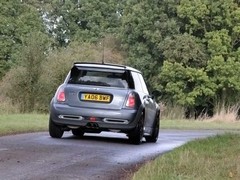 Much more raw and 'pure' than new one

Giddy already, it's out into the daylight and straight onto one of those mad multi-lane French roundabouts with the right of way issues. Although painfully aware I'm in a vaguely irreplaceable car (in terms of mileage, anyway), the GP's compact size and assertive, snarling responses make short work of out-muscling the native commuters: who is this foreign idiot in his shouty, aggressive-looking little right-hand drive car? Eyebrows are raised, passers-by gawp - it really does arrest the attention.

Trust issues
Approval swells as the journey progresses. The gearbox is light but precise, the clutch less so. The engine feels absolutely immense for just 1.6 litres - BMW's own work on the intercooler and engine-mapping adding to JCW's existing upgrade of the 'charger, intake and injection. 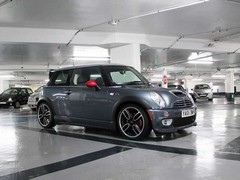 Back in the UK it begins - albeit slightly - to unravel. I'm finding it hard to trust the front end. Anticipating something sharp and pointy and tenaciously adhesive, compared to the best current hot hatches the GP doesn't quite transparently deliver. Could be the tyres or the geometry on this particular car - though it's also clear the diff does much better with the electronic traction gizmos disabled.

You wanna piece of me?
2,000 were built, and although 449 were originally destined for the UK, according to GPMini.net only 437 actually found homes here; judging by the PH classifieds you'll be needing at least £11K to join the ownership ranks. The imminent arrival of the new version is unlikely to diminish these values. The two are similar in character, but from my own brief squirt in the new GP2, all that clever aero can't quite make up for the missing mechanical diff, and the 1.6 turbo can't match the supercharged engine for charm. 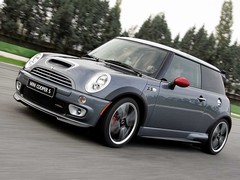 New one looks the part but is it too civilised?

And that's what really makes the MINI GP (version 1) a PH Hero: it might not be the fastest thing on four wheels, nor the hardest, but it's absolutely bursting with attention to detail and charisma.