The new 275 Trophy-R reaches customers soon, so what better time to celebrate its legendary predecessor?

Perhaps the most significant achievement of the Megane R26.R is that it reached such revered status amongst enthusiasts from fairly ordinary beginnings. It's fair to say the Megane didn't have a flawless track record as a hot hatch. And that's being kind. Indeed, the first

, the 225, was a big disappointment. Renault spent the following years attempting to atone for its error, adding power and limited-slip differentials, removing equipment for the 'Cup' pack and fiddling suspension settings.

By the time we got the Megane 230 F1 Team R26, Renault had another exceptionally talented hot hatch. But it wanted to go one (or in reality about eight) steps further. It wanted to create a new FWD hot hatch benchmark for circuit speed and handling prowess. Journalists wanted a shorter name to type. 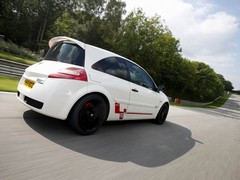 Spot the fingerprints on the windows

That car of course was the R26.R, launched six years ago at the British motor show. It fought for hot hatch affections with the

launched at the same time, a car that arguably represents the very antithesis of the Megane. One imagines the engineers at Dieppe fairly choking on their cafe au laits at the mere prospect of five cylinders, nearly 1,500kg and a 'Luxury Pack 2'. Two more diametrically opposed hatchbacks you're unlikely to comes across.

But has Ford had the last laugh? The values of R26.Rs are holding up very well but then so are those for the RS despite considerably more being sold at 4,500. Perhaps the Megane simply was too compromised. Or rather it was acceptable for those who bought the car but that group was simply smaller than Renault predicted. There are just 30 Trophy-Rs coming to Britain rather than the 230 R26.Rs slated for release over here.

However, it's the focused (if you'll pardon the pun) nature of the Renault that makes it such a PH icon. The levels of fetishism and dedication to removing unwanted mass would impress on a dedicated sports car, leave alone a £25K FWD hot hatch. It's a car dripping with nerd cool. It's for those people who just know how awesome Toyo 888s are, who understand the benefits of keeping the centre of gravity low and who can't resist the urge to tap naked carbon fibre. In a Renault Megane! 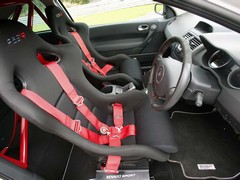 Focused enough for you?

The list of modifications that take R26 to R26.R is extensive and dramatic. The intention was to shed 125kg from the Megane's kerbweight; eventually the car was 123kg lighter, at 1,230kg. Deletion of the rear seats removed 30kg, and those Sabelt seats saved another 25kg. The R26.R has one airbag, for the driver. This from Renault, famed for its commitment to a range of five-star Euro NCAP models. So in the bin for passenger, side and curtain 'bags. Harness 'em tight. Another six kilos went by using polycarbonate instead of glass for the rear and side windows. 'Most of the soundproofing' was also ditched, along with climate control, the radio and the front fog lights. It's 156kg lighter than the current

Driving an R26.R is always, always an event. It may be memorable for as many bad reasons as good but it won't be forgettable. Yes, you may well fumble frustratingly with the harnesses in the dark or curse the lack of a radio on a really tedious journey. But you will become addicted to the exhaust blare, smile at the sound of the locks shutting in apparently empty doors and marvel at how absorbent the ride remains.

That significantly reduced kerbweight meant spring rates could be softened for the R26.R. The front springs went from 13.4mm/100kg to 14mm/100kg and the rear to 16.2mm/100kg from 15.1mm. With recalibrated dampers as well, the R's flow down a B-road is magical. The tautness and unflappable composure we associate with Renaultsport's best is evident but with an additional layer of compliance that eludes models like the current 275. And with that compliance comes additional confidence to brake later, turn in harder and get back on the power sooner. The diff acts in a more subtle fashion than newer Meganes also, gently tugging at the wheel out of slower bends rather than wrenching. Its adeptness at dealing with a British B-road is just superb. 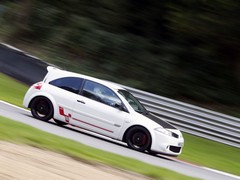 Unsurprisingly it's the R26.R's weight that has the biggest influence on its dynamics. In every facet of the car's behaviour you can feel the effect of those wonderfully geeky measures. In a straight line the 230hp R feels barely any less rapid than the the 275hp Trophy, the brakes seem indefatigable and turn in is so keen, the car imbued with a sense of limitless agility but never feeling nervous or flighty.

Those attributes remain on track too. We were fortunate enough to have an afternoon with the R at Brands Hatch GP. It's a fast and intimidating circuit that was crammed with fast and intimidating cars, but never did the Meg feel out of its depth. Well until some oik in a Mercedes estate comes thundering up behind... The Toyo rubber contributes significantly to the track performance with braking and traction at frankly unbelievable levels. The car can actually be pushed really hard with the traction control on - so seldom do the tyres relinquish their grip. And to think Renault asked just £700 for them and the cage together in 2008. They're vital to the full R26.R experience but you may also covet some less sticky rubber to exploit the car's balance on the road.

With such impeccable ride and handling it becomes harder to pick up on the Megane's slight foibles. It isn't perfect though. While the engine doesn't want for aural drama or outright power, its response is a little sluggish compared to the latest turbos. And though the speed of the electric power steering is spot on, it does want for a little weight and feel. 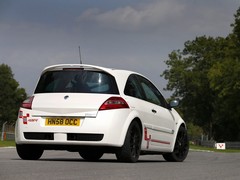 Still shakin that ass quite a few years later

However, that's to overlook the bigger picture with the Megane. They're minor concerns. It's a special, special car, an amazing concept that nobody ever believed would make production. That so many went unsold in Britain perhaps reflects that it was a little too hardcore for the casual hot hatchist. But Renault should be commended for being so brave in the first instance, and also continuing in the same vein with the Trophy-R. That car is faster and yet more capable but it will always be the successor to the original; the follow-up, the second album. As the totally captivating first of a breed and something less than a commercial success, the Renaultsport Megane R26.R's Hero status is assured.