"I was just 12 years old when I got my first motorcycle, a Pony Express moped. A week or two later I had opened the engine in search of more power and changed the exhaust... my neighbours were not happy, it was very loud..." 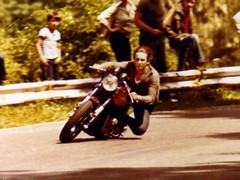 Bikes have been a lifelong passion!

Igor Akrapovic has been annoying neighbours the world over thanks to his skill in developing performance enhancing exhaust pipes for quite a while now. Found on everything from a ratty GSX-R600 to Jorge Lorenzo's YZR-M1 MotoGP bike as well as top end cars, it is amazing to think that all this success has happened over the last 22 years and it is down to the drive and determination of one man.

"When I was 15 my brother bought a Kawasaki 500 Mach3, unfortunately for him he had to serve in the army. For me it was a very good opportunity so I used his bike - I didn't care about a driver's licence, I simply removed the licence plate instead! This was the start of my passion for motorcycles."

Despite showing some promise during a fledgling racing career (including a wild card appearance in a 250GP against Randy Mamola and Graziano Rossi at the age of 19), a lack of funds hampered Igor and in order to make ends meet he was forced to get a proper job. 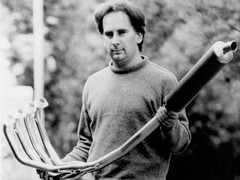 As well as training as an electrician, in his youth Igor worked in his father's workshop making plastic products before returning home to tune competitor's engines in the evenings to help fund his own racing - a move that led to his future career.

"I started tuning two-strokes but they are quite tricky. The more you tune them the more they break, but it was a good learning curve and soon I was working on four-stroke superbikes such as RC30s and GSX-R750s for several Italian and Austrian teams competing in national level racing," he remembers.

Having worked this way for six years, in 1990 Igor decided it was time to take the plunge and start out on his own as a professional engine tuner.

"I didn't enjoy making injection moulded plastic products so I decided to set up my own company. My father was very upset but my wife supported me and I opened a tuning shop in Ivancna Gorica."

Initially the company only worked on motors, but soon they branched out to exhausts as one of Igor's friends had a tube bending machine. 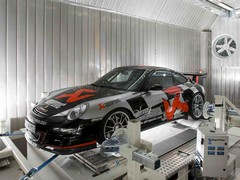 Akrapovic started on car systems in 2005

"At that time there were a few aftermarket exhausts on the market - Yoshimura, Termignoni, Arrow - but they were not as well developed as you would expect and we found much better solutions to gaining power," remembers Igor. "In 1993 I bought a dyno from America and started to use that to develop the exhausts; that was a major breakthrough, we could now tune both the motor and the exhaust simultaneously. All our exhausts were hand-built using a machine to bend the tubes into shape and one of us welded them together. It was much the same way as we make exhausts today, although technology has allowed us to speed the process up nowadays."

And what name was on these new exhausts? Not Akrapovic as you may expect, the first products to leave Igor's small factory were labelled Skorpion.

"The Akrapovic name came about in 1996. Ford had a car called a Scorpio and their lawyers approached us and told us we could not use the name! We changed it very quickly but it made us laugh, we were only a small Slovenian company making exhausts..."

As it turned out, the name change couldn't have happened at a better time. During the previous two seasons, Johann Schmidt had been running a Skorpion exhaust on his Kawasaki ZX-7R in the German Pro-Superbike series. Having won the championship, the fact his bike seemed more powerful than the rest of the field attracted the attention of the Kawasaki factory WSB team. 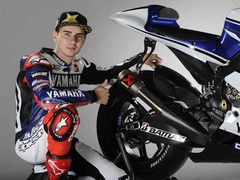 Akrapovic has come a long way since two-strokes...

"Harold Eckl approached me in 1996 and asked to test our products, he was so impressed that the team ran an Akrapovic system in 1997 on the factory ZX-7R of Akira Yanagawa and Simon Crafar in World Superbikes. Akira won a race using the Akrapovic and two years later we were making exhausts for every Japanese factory team. Winning that first race was such a proud moment, it was a tremendous feeling."

But with the factory teams involved, the amount of development and testing reached a whole new level and Akrapovic were forced to move to a new factory in Ivancna Gorica to accommodate the demands of supplying the world's best. Demands that sometimes required going above and beyond the normal...

"I think we did the most testing ever on Colin Edward's Honda SP-1 in 2000, over 54 different specifications of exhaust if I remember correctly. In the beginning the bike was not very competitive but Honda Racing pushed and of course every time they developed the motor we had to build a new exhaust - they worked us very hard but it paid off and together we won the Championship. That was a pivotal moment in our history." 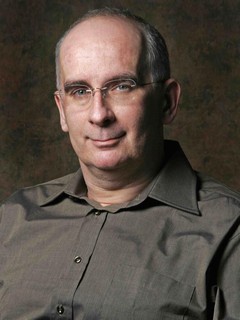 "I don't get that upset when it's mispronounced"

So what was the key to the company's success? "If you have a good exhaust it makes a huge difference to an engine, not just in terms of power but also throttle response. There are many issues that you can't test on a dyno, you need a skilled operator who can feel the changes to the motor. That is why we use a chassis dyno as well as a static engine dyno."

With all of the notoriously secretive Japanese factories now seeking their expertise, Akrapovic was forced to go through some extreme lengths to ensure secrecy.

"With Honda in the early days I remember a mechanic would come to our factory and we would do the test with him watching before returning the bike to a special room that was closed until next time. But in the end the trust got better and better."

After that initial world title in 2000, Akrapovic has gone on to take multiple MotoGP crowns as well as more WSB titles with a variety of teams. Sadly however for Igor, he has never had the chance to ride a MotoGP bike. Well, not quite.

"My office is above the racing department and if a new GP bike is being tested on the dyno I can hear it running. I often walk downstairs to see what is happening. My favourite engine sound is a twin, but engines like the V4 Suzuki MotoGP motor sound crazy... It's a shame I've never had the chance to ride a MotoGP bike, well apart from on the dyno at 300kph..." 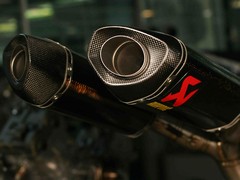 Everyone knows the logo now

Having established the motorcycle business, Akrapovic is now focusing its efforts on expanding into the four-wheeled world.

"In 2005 the company was growing and for safety reasons I decided to look at developing car exhausts. We have over 400 employees and just doing motorcycles was risky. It is a good opportunity as at that time there weren't any high quality titanium exhausts on the market. We developed a few exhausts and discovered that we are not very well known in the car world. We were involved with the development of the Porsche 997 GT2 which helped us learn about the car world, which is much more complicated than the motorcycle world. A bike exhaust is tested to maybe 30 or 40,000 kilometres, a car does over 200,000 in durability testing - you wouldn't believe what they do! If you can do an exhaust for Porsche you can do it for anyone! The theory is the same for car and bikes - weight loss, performance gain, a good sound. The looks aren't as crucial on a car as it is hidden but the tailpipe needs to be nice, made of titanium or carbon. The car business is growing well, we expect to be at the same level as motorcycles very soon."

Finally there is one question that everyone wants to know about Akrapovic and who better to ask than Igor himself - how is the name pronounced?

"We train our importers how to say the company name properly... it is pronounced 'A-krap-o-vitch'. Maybe it is a little bit complicated, I don't get that upset when it is mispronounced..."