We go for a spin in Arkonik's 430hp Defender - and meet the team already making waves in America... 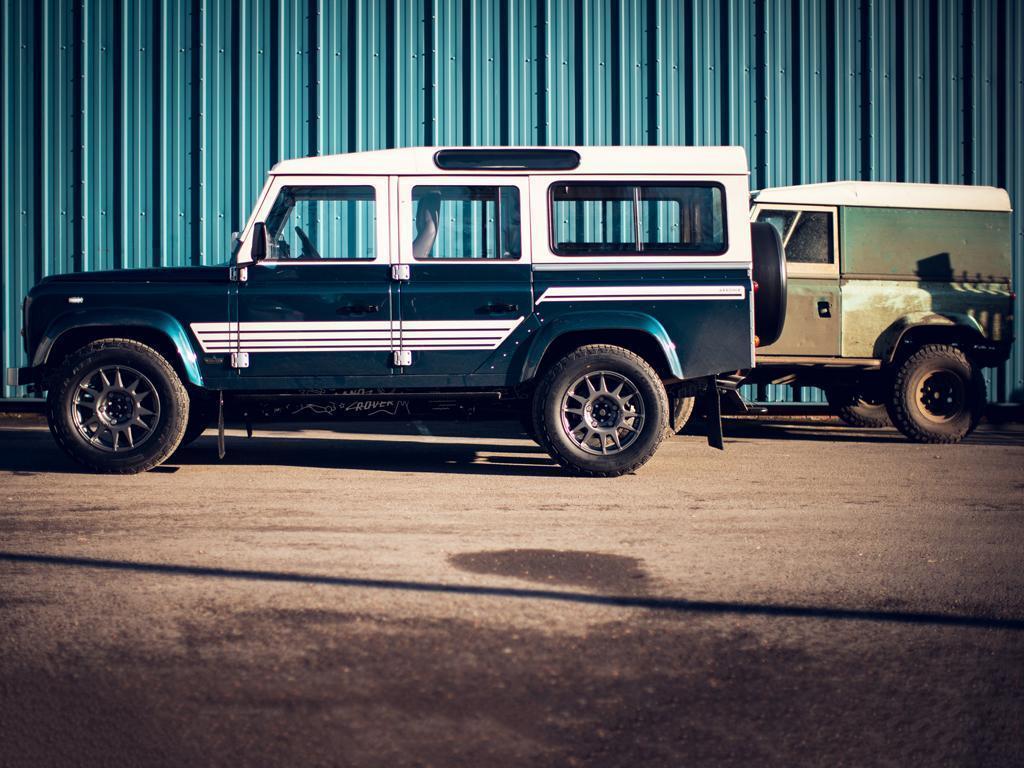 Arkonik is a British Defender restomod company that has approached its familiar niche in novel fashion. While it looks like just another specialist engaged in the business of re-engineering Land Rover's icon, the Somerset-based firm has risen to prominence via unconventional means. Its home, a four-building facility that's grown to cater for demand over the past decade, is based five miles west of Frome, yet the vast majority of its customers are thousands of miles away in the USA. 300 cars have received Arkonik's attentions, each left-hand drive and built to conform to US market's tricky import regulations.

"We've carved a niche because we're already specialists in adhering to America's unique import rules," says founder Andy Hayes, as we stand beside the better-than-new Defenders parked outside his company's workshops. "We've a great relationship with FAPS [the Foreign Automotive Preparation Service] in the US and we've designed our restomod processes to ensure the cars all remain recognised as 25-year-old or older [as per US import rules]. If we were to get it wrong, it'd work out very costly to produce and ship these one-hundred-grand-plus cars and have them turned away at US customs. We have optimised the whole process."

The reason for Arkonik's North American focus was almost entirely related to the economic climate of the last decade. In its previous guise (as Land Rovers UK - a name Land Rover took predictable issue with), the company decided to turn its attention away from a slowing European market in 2012 and tap into the burgeoning demand for overland vehicles in America. At the time, fellow Defender specialists like Twisted - who PH spoke to earlier this month about its fresh ambitions for the US - were building a strong reputation on home soil, whereas Arkonik was doing its work in North America, a place where the Defender has a considerably smaller but no less dedicated following. What really ensured success, though, was customers' love of beefed-up off-roaders.

"We realised that the 1984 Defender could be imported to America as it was over 25 years old, and we had a readily available supply of left-hand drive cars from Europe to use," explains sales and marketing director Thomas Parry as he walks PH around the site. "We have scouts across the continent who let us know when they find a car worthy of restoration - and many are because Europe's climate is generally much better than the UK's - which we can then buy and pick up on a trailer behind our very own 110."

But finding the cars and getting them home is the easy bit. It's the painstaking work that follows that earns Arkonik its repute. Every single component, every nut and bolt, is at the very least brought back to original standard. But as Thomas emphasises while introducing PH to each department leader - including powertrain, bodywork and electrical managers - most parts are actually enhanced. Be it through the use of thicker materials, higher grade metals or significantly better weatherproofing, there's no question that the Defenders to leave Arkonik's base are better finished than when they were first made by Land Rover. That feels like a given - but the level of work done here is genuinely outstanding.

It starts with the chassis, which is taken back to bare metal, given new body mounts and subframes, while retaining the all-important chassis number for the car's identity. Without confirmation of its age, US Customs would send the car back. And beside the stack of bare chassis that sit waiting for their turn in the workshop, there's a building that houses shelf upon shelf of engines, gearboxes and transfer cases. They're of varying 25-year-old or more specifications plucked from the recently sourced Defenders, including 200 and 300 TDI engines, and 3.5-litre Rover V8s complete with carburettors. Until recently, those were the only engines offered by Arkonik, but the company has tended toward American tastes and added GM's crate LS3 6.2 V8 to the pool with an accompanying six-speed automatic gearbox. Demand has been strong.

"Orders have gone up by 40 per cent since we added the LS3," smiles Thomas. "The waiting list is now 18 months, but we do keep customers informed throughout the build process so it's not just a case of waiting. We take pictures of every step and add them to an online portal that they can access, so for some customers - particularly those where the whole family has been involved in the spec - get real enjoyment from following progress. People have genuinely said they ordered second Defenders because they enjoyed speccing and having them built so much."

That rather illustrates the customer base; safe to say they're not short of cash. Nor are they city posers. Well, some may be, with many customers residing in New York and New Jersey - but there's plenty of demand for proper, rugged machines that find themselves off-roading in Colorado and charging over sand dunes in Florida. One customer, a body boarder, actually requested his car be capable of surviving sea water because he often parks it right at the edge of the waves - and he might not get back before the tide comes in. You can imagine the challenge that presented the team, especially those working on the bespoke, braided wiring looms created and fitted in house.

Thomas says that "the chassis gets the same level of protection as added to the very toughest lorry beds," so it's scratch resistant and "should last 50 years". And there's added waterproofing throughout the car, as well 100 per cent thicker floors (they're now 2mm) and lots of soundproofing, too. He adds: "Plus, we've got electric windows, electrically folding foot steps, heated seats and wheel, so the car is a big step up from Defender standard." The company has experience of adding winches, fridges and just about anything else Defender-worthy into the loom as well.

Customers who opt to stick with the original motor will, of course, essentially be given a rebuilt engine. The powertrain team replace everything but the block and gearbox casing, so, like the chassis, the original identity is retained with a better-than-new condition. Apparently, old Rover V8s that have overheated often suffer from slipping cylinder liners; should these need replacing, the team's work extends to the block itself. A common addition is four-way fuel injection, with an ECU so up-to-date that it learns a driver's habits and adapts the fuel air mixture to optimise for it. Think of it as a multi-mode powertrain that automatically recognises what mode you want.

Apply that level of restoration and modification to the rest of the car and, well, you can guess at the jump in perceived quality. Even the doors shut with a tough, rubberised feel, emphasising the better seal the cabin offers from the outside. Of course, the exterior and cabin themselves are also extensively customisable. Thomas says: "Some customers ask for more traditional colours, or those on the present Land Rover colour palette, while others ask for things like Skoda blues and Porsche greys. We can cater to absolutely everything, with too many materials, finishes and wheels to list. And the body the paint is applied to gets a full sand down so there's none of the Defender creases or roughness".

To illustrate what its team can do, and to help it emphasise to British buyers what's on offer, Arkonik has produced a new-for-2020, right-hand drive 110 demonstrator that's nicknamed UJO for the last three numbers on its reg plate. PH is let loose in this Stratos Blue and Cream Pearl creation, which is powered by the LS3 V8, outputting a healthy 430hp through the uprated transfer box. Somewhat predictably, it sounds mega, projecting a deep rumble through the bulkhead - although once rolling the effects of better soundproofing mean this is a Defender you can hold a low-volume conversation in at speed. Until, of course, you pin the throttle and Arkonik's modified intake inhales with an overpowering roar.

As intended, the V8 makes the 110 feel pretty quick in a straight line, and with Eibach lowering springs wrapped around Bilstein shocks in this road-biased setup (which starkly contrasts the lifted cars often sent to the US), the car corners with only a little roll while handling bumps with confidence. Still, the biggest improvement for someone not totally accustomed to pedalling a fast Defender is the tightened-up steering, which has none of the bagginess normally associated with the car. You're no longer rowing from hedge to hedge on a B-road, but rather able to control this swift moving beast properly. That being said, the turning circle remains aircraft carrier-ish in its proportions, and the upright seating position and boxy bonnet are nothing if not familiar. A Goldilocks mix of tradition and new for a Defender lover, you might say. And a genuine provider of mile after mile smiles - especially for anyone sitting perpendicular to the direction of travel on the 110's rearmost benches.

Naturally, Arkonik's latest offering appeals mostly to people who already love Defenders - that's virtually a given. But with the aforementioned modernisation - which the company believes takes usability to unprecedented levels - it's hoping to excite a few people looking for an everyday toy. As is almost always the case, Arkonik's creations are spec dependant in their pricing - but you can technically get a 90 from £95k. That being said, we suspect most if not all models on the slow boat to America have comfortably breached six figures. Arkonik's growing domestic ambitions will likely prove an even tougher challenge thanks to the proliferation of competitors. But if UJO is anything to go by, there's more than enough likeable idiosyncrasy - not to mention attention to detail - in Arkonik's creations for it to chart its own course in Defender waters.