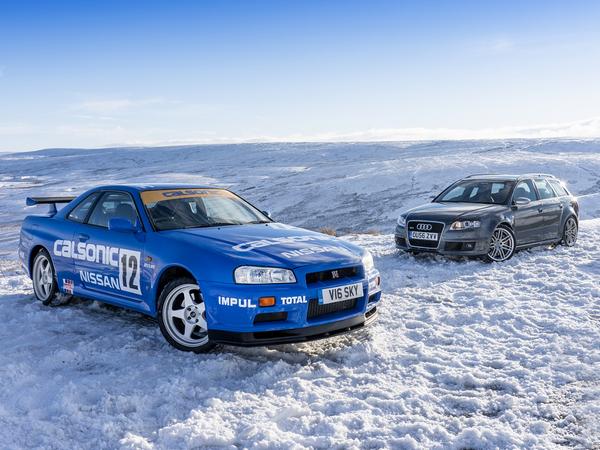 Any attempt to name the all-time greatest four-wheel drive performance car is futile. It's like trying to crown the best-ever hot hatch or V8 or Chapman-era Lotus. The subject is too broad, too blatantly subjective and also too well furnished with title contenders to be concluded to anyone's satisfaction. Where do you even start? Think just of the Imprezas and Evos that spring instantly to mind. Then there's the Delta Integrale, Celica GT-Four and Escort Cosworth. Then there's the Porsche 959. Then there's all the more recent exotica you've forgotten about: the Lamborghini Murcielago, the Ferrari FF, the Veyron. The list goes on.

Consequently, this test is not necessarily a head-to-head of our two AWD favourites. It's not really a head-to-head at all, given that one is a Japanese sports car and the other is a German wagon. But it is a revealing snap shot of the breed - and regardless of what car would emerge at the top of your own personal four-wheel drive hero pile, it's fair (we think) to say that a Nissan Skyline and an Audi Quattro of some description would feature on the shortlist. So here we are: the R34 and the best RS4, two of the finest exponents of fast and 4WD that ever there has been, taken to some of the very best roads Britain has to offer. We even organised the weather, too...

While there is much to separate them, the chosen two do share a few common traits. First and foremost is not just that they both feature all-wheel drive, but rather the extent to which their respective powertrains have become the defining facet of their existence and reputation. The Nissan showed what could be done with the technology on circuit, while the fast Audi fascination simply wouldn't exist without quattro. It won't have been lost on the German manufacturer that its domestic rivals now lean towards four-wheel drive for their fast family cars, while you only need look at the price difference between GT-T and GT-R Skylines to see what the market deems important there.

It's also worth noting that, many years after these cars ceased production, these two are being recognised as more than the sum of their parts. That applies to one car rather more than the other here, granted, though the RS4 is surely due renewed appreciation soon; it was seen as distinctly (and pleasantly) unAudi-like at launch, a point that's only become more remarkable as subsequent RS Audi products have failed to match its reception - the B7 really was a high watermark for the brand. The Skyline is on another planet for legend and reputation, though, of course: only 80 R34s were ever officially brought over in 1999, yet 20 years later its impact and hallowed status show no signs of abating. 2 Fast 2 Furious (2003), Need For Speed Underground 1 and 2 (2003/2004) plus Gran Turismo 3 and 4 (2001/2004) ensured the car's formidable reputation, both standard and when modified, was spread far and wide - long before many budding racers could even drive one.

First surprise - beyond Nissan's decision to sully its otherwise immaculate heritage model with a race car livery - is just how docile the Skyline actually is. This is not some fragile, demanding, obstreperous JDM special. It feels sturdy and dependable, entirely happy pottering around town as it is on a five-hour motorway cruise. Fairly long gearing makes it more than acceptable at 70mph - no 5,000rpm buzzing here - 20 years of cars getting ever stiffer makes the ride entirely tolerable and the R34's narrowness makes it feel compact and wieldy in a way it surely never would have in the last century.

And that engine. What a thing. Nissan saying this standard car has 280hp is diffidence to the point of blatant dishonesty - most estimates put them at around 340hp from the factory - but even with nothing more to help it along from stock than gallons of 98RON the RB26 is completely bewitching. There's the kind of turbocharged rush that simply doesn't happen anymore, more than 3,500rpm required for real performance, but allied to a furious gallop to 8,000rpm it becomes more than worth the effort. It sounds exciting, too, raspy and metallic and overlaid with turbo histrionics, like all your best PlayStation tuner specials with the volume turned down. It feels quick on a cold day in 2019; twenty years ago it must have seemed ballistic.

Up on the Hartside pass, the Skyline only impresses further. There are clear, tangible links from this car to the R35 GT-R we know and love today, making the R34 feel even more remarkably prescient. And good fun, frankly. Nothing else on this planet goes down a road like a GT-R; the driving experience as distinct as an old 911, or a Caterham, or a great front-wheel drive hot hatch. Like the new car, this one features damping of resolute quality, communicative steering and a distinctly mechanical feel; those clonks, whirrs and graunches that have made the R35 legend are certainly present here. Indeed they're amplified further; the sounds more raw and the feeling of interaction intensified with a burly, accurate six-speed manual.

The genius, of course, is in the chassis, for being so ahead of its time and yet also feeling entirely natural and cohesive. The Super HICAS four-wheel steer gives the Skyline the kind of agility and precision that makes the systems de rigueur nowadays, and the ATTESA E-TS Pro four-wheel drive feels far more intelligent than you'd ever guess for technology so old. As well as splitting power front-to-rear, by the time of the R34, ATTESA could send torque across the rear limited slip-diff as well; clever even today, and properly engaging when the power is discernibly shuffling in all directions. Oversteer feels like no other car, moving out on throttle and yet requiring little corrective lock as the 4WD powers out as well. As the Skyline feels like it's churning the very tarmac below for traction, steering very slightly correcting the line and straight-six howling, the legend feels very much deserved. And absolutely perfect for the conditions, thanks very much.

The RS4 goes about its business in a more reserved fashion, yet it's no less impressive. If the Skyline is everything that's expected of a 90s' Japanese icon - demanding, focused, brimming with attitude - then the B7 confounds every preconception of fast Audis. This is a supple, fluid, engaging, rewarding, satisfying, desirable sports estate, one that just so happens to have four rings on its nose. Oh yes, and there's a whole hunk of V8 behind those rings, seemingly about to burst out of the grille. In 2005, given what had preceded it, this RS4 must have felt like an improvement not far from a complete transformation; the idea was fundamentally the same thing, but the end result so much more immersive, advanced and enjoyable.

That a 4.2-litre V8 snorting, thundering and growling to 8,250rpm might not be the highlight of the RS4 package just demonstrates how dynamically sorted this car is. It doesn't require suspension modes, because the standard setup combines deft agility with admirable body control and surprising comfort; the steering needs no other settings because what it has is accurate, direct and confidence inspiring; there's no longing for what a manual gearchange might be like because, well, that's all there is.

This car isn't flawless - the shift is a bit hollow, the pedals a little awkward and the balance certainly nose led - but there's a cohesion and a flow to this RS4 that would be immensely satisfying from any manufacturer; that it's an Audi makes the achievement borderline miraculous. In stark contrast to the B9, it feels like a car that there's more to learn from and uncover, which means you just want to drive and drive in conditions like this. Forever.

That the RS4's lithe dynamism is accompanied by such a stonking engine feels like the cherry atop the sprinkles on top of the cream of a delicious sundae. The big V8 picks up from no revs at all, zips through its mid range and fairly howls beyond its 7,800rpm peak, making the current twin-turbo V6 feel about as characterful as porridge. Sure, it doesn't have the effortless shove of a newer, torquier engine - but that at least means going fast takes some effort (and conjures some reward); you don't accidentally find yourself at 100mph. It sounds fantastic, the ratios suit, the manual tangibly improves the experience... this really is some powertrain. Some car, too.

The V8's coupling with all-wheel drive, as with the R34, feels elemental in its appropriateness. It just wouldn't be the same without it - which is another way of saying it simply wouldn't be as good. The layout is there to be celebrated, for the confidence it gives in conditions which might otherwise slow you down to the extent with which it suits the almost-sensible family estate vibe that the RS4 exudes when it's quietly filling out a driveway.

Which, conveniently, brings us right back to the opening gambit - that the pair represent more than just a couple of great cars. The R34 legend will only continue to grow as the last of the original GT-Rs; as much movie star as automobile. Its 20th anniversary this year is significant, not least because it means 25 is just round the corner which would qualify it for legal US imports. As the golden period for Japanese fast cars fades further into distant memory, the GT-R continues to evolve and standard cars from the turn of the millennium become trickier to find, R34s will surely only rise in value - from a very high point that they're already at.

If that sounds disheartening, the fact that the world hasn't yet woken up to the other four-wheel drive icon of this test should give some hope. Really nice, usable RS4s are still available for less than £20k, with numbers still healthy; given where RS2s have gone in recent years (a more significant car, yes, but nowhere near as nice to drive) the time must surely be now to secure one. This is a great performance car and a four-wheel drive legend that just so happens to be a very pleasant Audi as well - and that combination of talents is as nakedly appealing as that sounds. The Skyline met lofty expectations over three days in its company, whereas the RS4 wholly surpassed them. Don't blame us when the best ones are £50k...

Search R34 GT-Rs in the classifieds

Search B7 RS4s in the classifieds