It's diesel versus petrol in the fast wagon derby. Prepare to take sides... 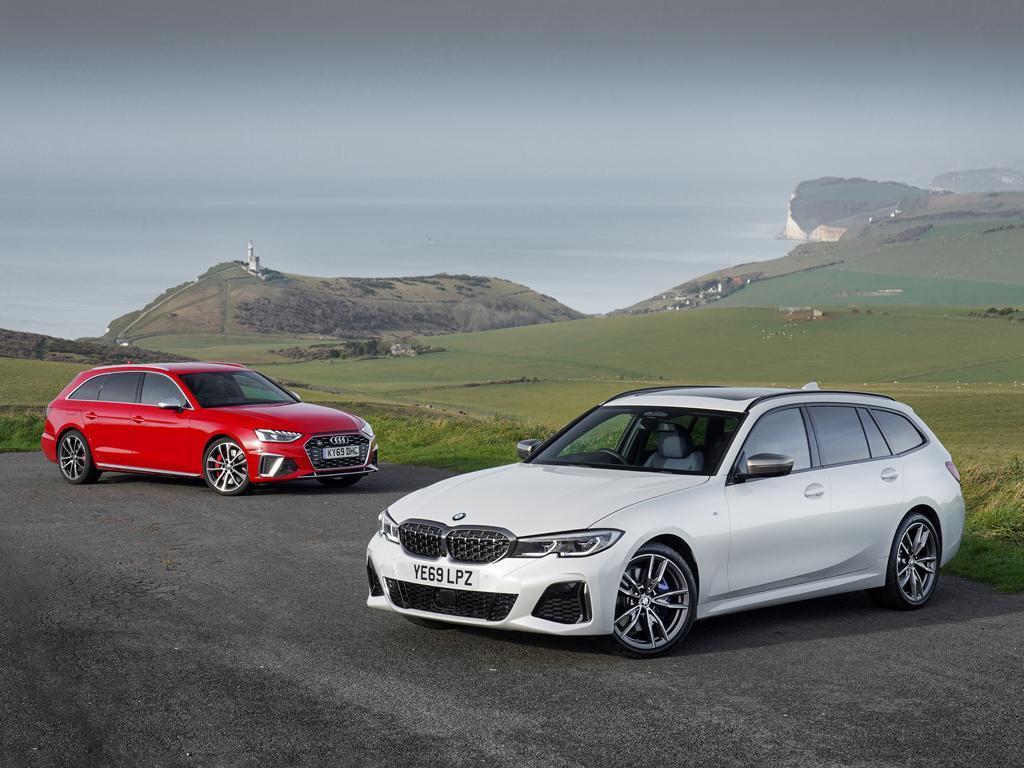 Audi S4 Avant
Let's not beat around the bush here, if we list the duties normally assigned to a fast estate and cross-reference it with the new S4's best traits, it pretty much nails them all. It's got a big boot, loads of torque, and with a starter-generator-assisted diesel engine, it's actually economical. This is the thinking (wo)man's option, right? That it's also comfortable on a long run and capable of towing 1.9 tonnes of braked trailer - 100kg more than the BMW it's up against here can manage, and easily enough for a couple of Caterham 7s - is equally significant. But I know what you're thinking: the BMW's going to be more fun. Hold that thought.

Because I'd argue that in the past couple of years the engineers at Ingolstadt have rediscovered their mojo. Audi has gone from making quick-but-blunt machinery to stuff that genuinely entertains again. The trend is evidenced by the promotion of the two-wheel drive R8 RWD from limited edition to full series production model. But the trickle-down effect is on show even in well-behaved sporting models, S4 Avant included. Only a few years back the clichéd response to an Audi ditching its predecessor's petrol six-pot for a turbo diesel would have probably included complaints about fun and understeer. But that's simply not the case these days.

Case in point: the S4. Audi's quick Avant is powered by a 3.0-litre oil burner with 347hp and 516lb ft of torque; the latter showing up from 2,500rpm. The way the Avant piles on pace is seriously impressive; the shifts of the eight-speed Tiptronic are practically imperceptible thanks to the torque filling generator, meaning acceleration is even more linear than you might think. Combine that with great refinement and it takes regular checks of the speedo to ensure you don't settle dangerously deep into licence-losing territory. The engine sounds impressive, too, with a familiar V6 smoothness underlined by a gruff exhaust note.

Still, it's only when the optional quattro sports diff - a worthwhile £1,400 addition - is fitted that this setup really throws punches at the M340i. With this hardware, the diesel motor can shift the car's balance like all the best performance machines, literally moving the S4 Avant from its glued-down default into something like playfulness. Surely no diesel Audi has ever been so eager to rotate; with near instantaneous torque and a driveline capable of sending most of it rearwards, the technical makeup practically dictates it. The Audi steers with intent and composure, but remains permanently able to soak up the lumps and bumps below, no matter the drive mode of the optional - and essential - adaptive dampers. The BMW can't claim to do the same on its equivalent shocks.

So much for the surprises, how about the bleeding obvious: the Ingolstadt's interior walks all over Munich's. There's nothing particularly wrong with the M340i's cabin, but the S4 looks high-tech and impressive where the 3 Series is a bit, well... officey. Does anyone really want to leave a long day at a desk and climb aboard something with Business packs? Surely they'd feel more relaxed facing the well-designed digital displays and fonts that hark back to a rally lineage (ie. the quattro). The cabin is inherently functional, comfortable thanks to nicely bolstered leather seats - our car gets the massage function for the driver - and spacious, with 1,435 litres of storage room behind the front seats.

Should you prefer your cars to do most of the driving for you, the Audi can also deliver on that. The effortless automatic powerplant is supplemented by a plethora of driver assist features that, with all the nannying systems left on, make having an accident a really rather difficult task. Parking this 4,745mm-long machine is a doddle, too, even without the European-only dynamic steering that's oddly fitted to our UK test car to practically remove all effort required for low speed manoeuvres. Chuck in the aforementioned fun and you get the consummate fast wagon: dependable, safe, solid, sensible - and maybe secretly capable of setting your hair on fire.
SS

BMW M340i
Not so very long ago, two-thirds of motoring journalists would have cheerily conceded that a 335d xDrive wagon was all the car they ever really needed. And anyone left over would have argued for the 330d. It was that kind of decade, and the F31 fitted into it like Felicity Jones into a John Lewis glove. I was no different, save for the fact that I'd driven the Alpina D3 and thought it even better. Coincidentally its modified N57 motor produced almost exactly the same figures as the Audi - 350hp and 516 lb ft of torque. I'd bet all the money in my pockets that the engineers responsible for the S4 had only one rival in mind when they conceived it.

Sadly, that moment feels like a thousand years ago. Rightly or wrongly, fossil fuels are in the dock and diesel is bearing the brunt of the cross examination. Audi's latest V6 may very well be as virtuous as freshly fallen snow - but it's masking all manner of underlying pitfalls (some imagined, some not) and the decision to make the S4 diesel-only in Europe now seems, at best, tone deaf. Which is not ironic at all, because a little bit of tone deafness is still required to enjoy the distant rumble of oil being burnt. Sam means 'gruff' in a good way. There is a bad, too, and there's no escaping it under load or at idle.

How does it compare to six petrol-filled cylinders arranged in a line? Well, how does birdsong compare to a parrot's squawk? The B58 is honestly not the most melodious inline engine BMW has ever built, but its idea of refinement is a vacated church hall when measured against the S4's sullen drone. Moreover - and this really is as plain as the nose on Sam's face - it's better everywhere else, too. Once you've got over a gargantuan, gap-in-the-traffic-missing pause between pushing the accelerator pedal and the transmission locking up, Audi's V6 is fast only in the ultra-linear way you'd expect from a beefed-up modern diesel. So it merges with fast lane traffic like a Trojan. But can't make a second-gear corner seem interesting.

The M340i meanwhile can do it all and then some. It creeps assuredly and in silence, and then lets you meter out 369lb ft of torque like piped icing. Do you notice the 147lb ft deficit in twist? Not really. Not really because the opportunity to guiltlessly mash the accelerator pedal is seldom encountered these days, and when it is, the BMW never leaves you in any doubt that you're building to something more interesting near the redline - something beyond 600rpm of mid-range shove. At 5,500-6,500rpm the M340i develops 27hp more than the S4 manages at 3,850rpm. Which rather says it all.

Elsewhere, and not unlike in the F31, the 3-Series wagon grafts this bear-hug of a powertrain to a mightily impressive fast family car. Undeniably Audi has made inroads on BMW's lead in comfort and driving pleasure - the M340i's adaptive wheel control is a shade unforgiving, it's true - but it has still not found a way of replicating its rival's steering response, which is an object lesson in how to make a car's direction change seem both consistent and satisfying. Where the S4 turns in abruptly and showily, the M340i makes its superiorcomposure seem inherent and entirely instinctive. In the Audi you wonder at the clever things going on in the all-wheel drive system; in the BMW, the poise and obvious rear-end bias makes you wonder whether its four-wheel drive at all.

Clearly the scorecard is not without its blemishes. The S4's upper hand in the cockpit is hard to counter - especially given the M340i's cringeworthy instrument cluster - although it's worth reiterating how highly the BMW scores on things you interact with. Touchscreens, no matter how good to look at, remain a divisive way of controlling the infotainment in a fast-moving object; personally I'd default to using the iDrive controller every time, a choice which surely can't be all about familiarity. The M340i's inevitably chunky steering wheel is nicer to hold, too, and its paddle-click more agreeable. Then there is the 3-Series' gear lever, which is more gratifying in every way, and also configured to make manual ratio changes happen in the right direction. In a nutshell, that's what continues to separate BMW from the chasing pack: a profound appreciation of what makes a car unputdownable in the real-world. In that respect, and many others, the M340i picks up exactly where the F31 left off.
NC