The V8 powered F-Pace won't be with us for long; can it beat the new X3M Competition before it goes? 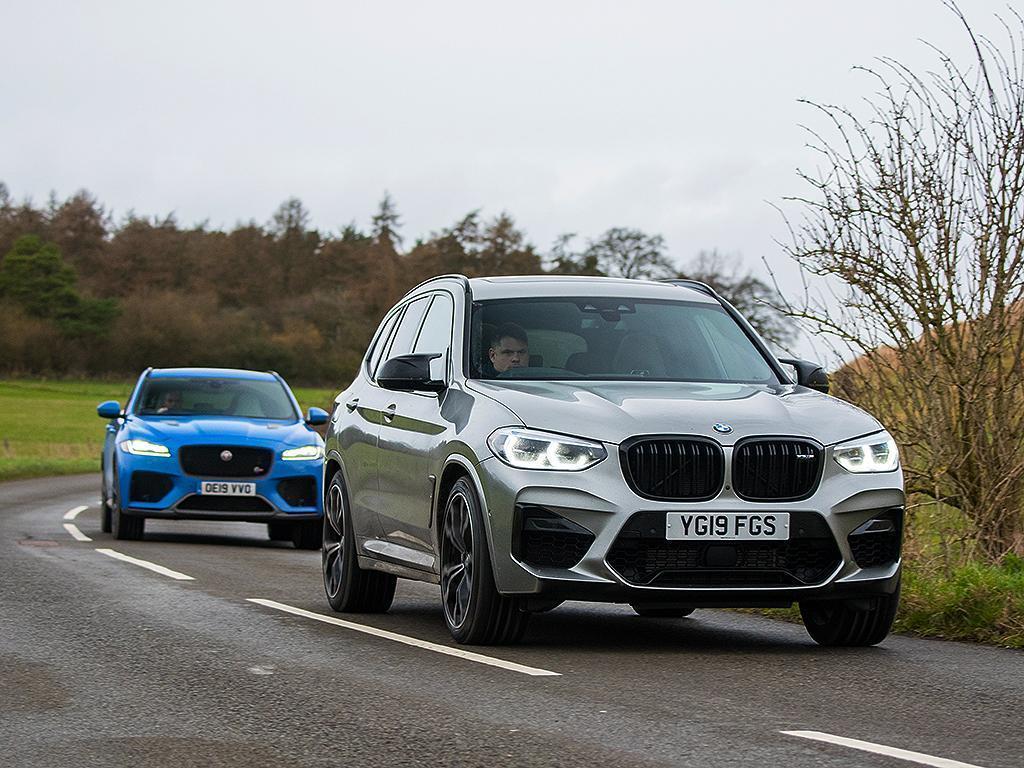 Here's a twin test that a significant percentage of readers are probably hoping both cars could lose. The genre of the performance SUV remains as divisive as Marmite, Brexit or whether the more appropriate response to Love Island is tear gas or Napalm. But, as with all contentious subjects in our either-or, easily offended age, it's worth remembering there is feeling on the other side, too - as evinced by a level of global demand for cars like these which is causing a manufacturer pile-on.

There's also no disgrace in finding yourself drawn to such compelling combinations of utility and practicality. Neither the X3M Competition or F-Pace SVR comes close to the classic definition of a performance car - both would be more dynamically accomplished if they sat closer to the ground and went to fat camp. But they are also quicker in a straight line than most decade-old supercars, big enough to lug a family and come with the slippery weather security of clever all-wheel drive systems. Plus you can even take them off-roading. Only kidding!

Our pairing will have only a fleeting overlap. While the F-Pace SVR only went on sale last year - after a long delay - its life has always been destined to be a short one thanks to the impending closure of Ford's Bridgend factory that produces its supercharged V8 engine. By contrast the X3M is pretty much brand-spanking new, giving a preview of the mechanical package of the forthcoming M3 and M4 with the new S58 M-spec twin-turbo straight six, the M5's all-wheel drive system and an actively locking rear differential.

By the admittedly limited standards of their segment, both are actually pretty good looking. BMW's designers clearly got rid of most of their rage and fury in the muntabulous X4M, a car designed for those who work out while standing in the window of the gym. By contrast the X3M is pretty restrained, with bigger bumpers, 21-inch wheels around huge brake discs and quad exhaust pipes giving the visual distinction appropriate for a range-topper without turning purple minion. The M4-alike door mirrors do look a bit daft, though.

It's much the same story with the F-Pace SVR - turned up compared to the standard car, but not to the extent it shakes plaster from the ceiling. Ian Callum's first take on an SUV remains one of the segment's nicer bits of design, lithe and flowing rather than big and brutish. The SVR probably isn't better looking than the regular version - not unless huge cooling apertures are really your thing - but it looks special without being shoutey, with widened arches, extra vents and another quad-exhaust set-up. As standard it gets 21-inch wheels, but the car you see here is sitting on the upgraded 22s, which still don't look huge in those vast arches.

Jaws will go undropped and flabber ungasted that both of these cars are naffing quick - although one has an edge. The raw numbers, improbably though they are, tell only a modest part of the story. BMW boasts a 4.1-second 0-62mph time, Jaguar claims 4.3-sec for the same benchmark. But impressive though they are neither stat gives a sense of how easy speed comes to both of these cars thanks to the combination of impeccable traction, huge torque and swift-shifting automatic gearboxes. Beyond the ramped seating position there's no sense of untoward drama in either; the Jaguar pitches up noticeably more than the BMW does under full throttle, but both have the ability to conjure absurd speeds on even short straights. Nine points on your licence? Definitely don't pick either of these.

Sound - that's an easy one. Eight beasts six, and the F-Pace's urge comes accompanied by an appropriately muscular soundtrack, deep-chested and snarly as it gets towards the 6500rpm redline and with a pleasing burble under gentler use; you don't buy a V8 like this unless you want to be reminded of the fact. The X3M is revvier and sounds more exhausty - like its already exhaling through a fruity aftermarket sports silencer at high revs - but is much less aurally interesting at everyday pace. Both have pops and burbles aplenty under hard use and in their more aggressive switchable modes, but both are reasonably quiet when you want them to be; unlike the F-Type SVR's pheasant shoot impression the F-Pace won't get the neighbours complaining with early starts.

While both are hugely fast, one is definitely faster. The F-Pace has an extra 39hp yet the BMW has a clear stamped accelerator advantage, if not quite strolling away from the Jaguar then soon ambling out a decisive lead. The X3M has a crisper throttle response, too and a snappier and more decisive gear change; add it all up and requests for progress get from the driver's brain to the road markedly quicker. The F-Pace is hardly a slouch - and the abundance of supercharged torque at low revs makes it feel the more muscular at a relaxed cruising pace when under a gently flexed toe. But for anyone choosing between this pair on the grounds of raw performance, the X3M has more - although probably not quite as much as the Stelvio Quadrifogio.

But for the more likely hypothetical buyer wanting a vehicle for corners as well as straights, the pendulum swings the other way. The X3M handles with the same towering efficiency it goes quickly: with huge grip, deadly accurate steering and iron-fisted body control. Nevertheless, even when covering ground at the pace of a skipped-forward video it never creates the sort of connection that used to come as standard with an M-badge, not beyond the adrenaline spike that comes from unlikely speed. Driven at the sort of seven- or eight-tenths pace that feels like a better fit for a bumpy, damp British B-road the BMW feels like it's barely breaking sweat; the driver is unlikely to be doing so, either.

Although prototype versions of the F-Pace SVR probably spent as much time on the Nurburgring as X3M mules did, the Jaguar feels immediately better suited to UK tarmac. It has a longer legged gait, with what feels from the driver's seat to be a greater willingness to use suspension travel. It parries bumps with much less effort, and even its stiffer Dynamic setting feels more compliant than the X3M's Comfort suspension mode. Steering is lighter and more input is required to get the front end turning, but there is also more feedback through the wheel.

Pushed really hard, the SVR loses some composure. On slow, slippery turns the front end runs out of grip first; seemingly regardless of dynamic mode or even with the DSC stability control system switched to its Sport setting. On a skidpan or a frozen lake I've no doubt the F-Pace could be turned far more spectacular; but on damp roads in Oxfordshire there was little sense of the potential for rear-end excitement of other SVR products.

The X3M is a dog with more tricks. While it does without the rear-drive drift mode its true M car siblings offer, it does also have a distinctly playful rear end. Push through the huge grip on a slippery corner and there's unmistakable yaw even with the stability control standing guard. Turn this down (or off) and the X3M is capable of the sort of neat, easily-held slides more normally associated with lower and lighter M cars.

When it comes to the more appropriate challenge of shrugging off miles, there's really nothing in it. Some will doubtless reckon that the X3M's tiered dashboard looks newer and more technical when compared to the F-Pace's more traditional smooth slabs, but it's equally valid to prefer the Jag's more conservative approach. From a natural seating position the F-Pace has a higher glassline, which helps it feel a bit tighter-fitting and sportier, but also a massive blind-spot behind the A-pillar. OCD sufferers might also get snooty about the way the SVR's black plastic climate control buttons don't quite line up; the X3M's are equally fiddly, but look and feel better. Although such criticisms are well inside niggle territory. On refinement the Jaguar has an edge on high speed ride quality but the BMW seems slightly quieter at a rapid cruise. Both are seriously nice places to spend time.

Leaving only the podium ceremony, and what's only a narrow escape from a cop-out split verdict. It's heart versus head territory; objectively the BMW feels more modern and more talented, better at the performance side of being a performance SUV. Yet while it lacks the raw excitement of other SVR models, the Jaguar is definitely the more charismatic of this pair, capable of inducing wider grins and easier to live with everyday. It's not just about the V8 - although the soon-to-die engine is a large part of the car's appeal - it's also an all-round likeability that makes the X3M seem clinical and a bit aloof by contrast. It isn't really necessary to make too much sense in a segment as fundamentally irrational as this one - which is why the Jaguar takes the win.

Search for a Jaguar F-Pace here

Search for a BMW X3 here