Ever wondered what the difference is between the road-going 310R and its circuit racer equivalent? 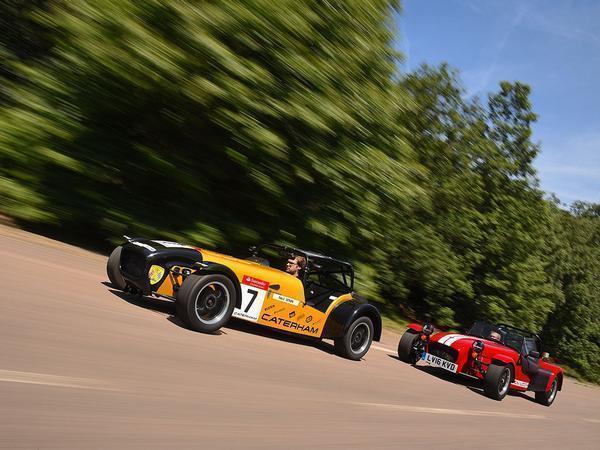 The majority of performance car manufacturers have, at one time or another, made use of the same rather cliched phrase: 'it's a race car for the road'. You know what, though, I don't blame them. Be it Porsche with its GT3 RS or BMW with its low volume M3 GTS, manufacturers pour millions of pounds into high profile motorsport championships in order to develop new tech and demonstrate that there is a clear link between their road and race machines. Therefore, I guess it's fair that a manufacturer like Ford gets to call its GT a Le Mans winner with number plates.

However, if we look past all the marketing hype, even a homologation special like the GT is pretty far removed from the racer. For example, the GT racer uses a different gearbox, a different engine (yes, really), a different exhaust system, passive not active suspension and more extreme aero than the road car - and that's before we've got to the elements that make the production GT road legal.

So where am I going with this, I hear you ask? Well, after spending two rather intense weekends competing in the Caterham 310R championship - as well as chatting at length with Caterham's chief motorsport and technical officer, Simon Lambert - it occurred to me that Caterham may well be responsible for building one of the only true race cars for the road. As far as I could see, my racing spec 310R was only a numberplate (oh, ok, and perhaps some lights and a horn) away from being road legal.

To see if this was indeed the case, we set about getting both cars together so we could perform a back-to-back comparison. The results were rather interesting.

Before we climb behind the wheel, it's worth briefly going over the 310R's unique gestation period. You see, this is one of those rare breeds of road car that was genuinely developed as a racecar first, road car second.

The story goes that Caterham was developing a package for racers looking to move from the mid-level 270R championship to the more competitive 310R category. While doing so, it stumbled upon a setup that delivered such impressive all-round performance that the engineering team felt it was worthy of its own 'road' car.

The changes themselves are surprisingly minor, and aside from the addition of a limited slip-differential, revolve solely around the 270's 1.6-litre Ford Sigma engine. In short, new high-performance camshafts, uprated spark plugs, a tweaked breather system and revised mapping allowed the engineering team to extract another 20hp from the naturally-aspirated unit - increasing overall output from 135hp to 155hp.

Now, 155hp might not sound like a lot, but it's important to keep in mind that this is a car that weighs just 540kg - a detail that becomes immediately obvious the first time you open the throttle. First, second and third gear come and go within the blink of an eye, so closely packed are the ratios that make up the optional £2,495 six-speed manual gearbox. On a narrow and bumpy British B-road, the 310R feels quite a bit quicker than its official 0-62mph time of 4.8 seconds suggests.

And this immediacy permeates every aspect of the driving experience. The steering is so quick that even the most delicate of inputs has the front end diving for the apex; after a few minutes behind the wheel navigating fast corners feels almost telepathic. And because the 'R' comes on a smaller 15-inch wheel - and, therefore, on a skinnier six-inch tyre (rather than the eight-inch rubber of the 360 and 420) - it has the perfect power to grip ratio, allowing you to slide it about at low speeds with relative impunity.

Put simply, the 310R is an absolute riot, being arguably the most balanced and well-judged Seven in Caterham's current line up, something you might not expect from a car designed to live on a racetrack.

Unlike Academy and Roadsport championship machines, the 270R and 310Rs don't have to be road legal. So in order to save weight and reduce drag, the front and rear lights are thrown in the bin, the standard road car windscreen is replaced with a smaller plexiglass aero screen and the passenger seat is removed - all fairly simple changes.

The biggest alteration, however, is the addition of a full roll cage. Now, ingress and egress is never straightforward in a Seven, but the cage makes things even more complicated. Even if you decide to race without doors it's still easier to enter the cabin by climbing over the top of the cage, standing on the transmission tunnel and then lowering yourself into the tight-fitting composite race seat. There's something that feels very Dukes of Hazard about the whole affair.

Thankfully, once you're strapped in, the cockpit environment is very familiar to the road car. Luxuries like the carbon fibre dash and leather trimmed steering wheel are gone, replaced with steel and suede, but the layout of the instruments and the seating position (our test cars both had the £495 lowered floor) are near-enough identical.

Indeed, even when you start the thing it sounds surprisingly similar to the road going machine. Now, I appreciate this shouldn't come as a surprise - mechanically both cars are near enough inseparable. However, with a roll-cage over your head and a stripped out interior surrounding you, somehow you expect it to be race car raucous. Instead, the engine idles away nicely with next to no vibrations (at least by race car standards) transmitted into the cabin. In fact, at low speeds, it's the high-pitched whine from the five-speed gearbox and rear axle that dominates.

But surely the race car will show its unforgiving side once you start to really stretch its legs? Well, not exactly. As I hinted at earlier, all 310R race cars use a Mazda MX-5 sourced five-speed manual gearbox instead of the close ratio six-speed available on the road car. Surprisingly, the reason for this is not performance related, it's simply that the five-speed is a little harder wearing, which is important when you're fighting for a championship week in week out.

However, the five-speed 'box inadvertently brings more to the package than simply improved reliability - it lets you revel in the 1.6-litre Sigma's incredibly linear powerband, all the way to its heady 7,500rpm limit. In a world full of turbocharged engines that force you to short shift through the gears, the 310R's drivetrain is a delight. And unlike the six-speed road car (which, we recommend you spec with the standard five-speed), everything feels less hectic in the cabin as there's no need to keep grabbing gears.

But where the race car really sets itself apart from the road car is in the corners. Where our 310R press car came with sports suspension (standard with the 'R' pack) and Bilstein road dampers, the race car came on track suspension and race dampers, and the difference in body control is immediately noticeable.

Where the road car adopts a bit of lean through high-speed corners the race car exhibits virtually no body roll, which not only allows you to attack corners more aggressively, but it also keeps the car stable through quick direction changes: the result being less weight transfer and therefore less loss of traction. Of course, you can still give it a bung now and then if you want to revel in some gratuitous oversteer, but even when you're over the limit, the race car feels more predictable and better controlled.

All of this adds up to a package that is arguably less taxing to drive - well, on the limit at least - than the road car. Who'd 'ave thunk it?

A race car for the road?

It's easy to become a bit sceptical in a world filled with endless Nurburgring records, spurious advertising and race inspired 'special editions', which is why the 310R feels like a breath of fresh air.

It only takes a few minutes behind the wheel of the racer to realise why the development team decided the 310R was worth transforming into a stand-alone model. All the characteristics that make the race variant so involving make for an inherently well-rounded road equivalent, something that I'm not sure can be said for any other 'race car' for the road.

Factor in that the 310R Championship itself is now one of the most competitive domestic series ever created, and surely the 310R has to go down as one of the all time great road racers.