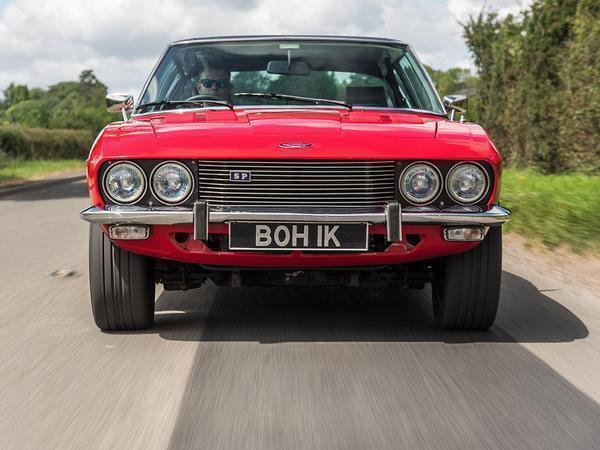 Seen a Jensen Interceptor recently? Probably not would be the assumption, these grand GTs of the 60s and 70s – a highpoint for British sports cars, surely – are a scarce sight in 2019. Like so many, it was a victim of plunging values not so long ago, repairs and restoration not deemed worthwhile given what they could be sold for. So they were bodged or binned, which is no good for survival rates - and that seems rather a shame.

Not only does the Interceptor boast that classically successful combo of chunky V8 dropped in handsome British brute – see also MGB GT, the early TVRs, Cobra, and so on – there’s additional intrigue courtesy of the ground-breaking FF and glamour thanks to a few Vignale-bodied cars. There’s a significance that arguably belies its public perception, then, a significance that Cropredy Bridge is keen to preserve. Once a Jensen service centre, it now plies a trade selling, upgrading and restoring the Interceptor and FF, which sounded like an entertaining - and educational, of course - day out if ever there was one.

Matthew Watts is CEO of Cropredy and his technical manager is Mark Walbyoff, their enthusiasm for the brand and their work clear to see. The workshop is crammed with Jensens in various states of repair, from recently purchased barn-find projects that’ll need at least 3,000 hours of work, to one that’s already been subjected to just that, an incredibly rare left-hand drive, Vignale-bodied car that will eventually go to an American collection.

“The Bentley of Jensens” is how Watts describes what they are; confusing analogy, but one that makes sense when you see the work: it’s about meticulous craftsmanship, huge expertise and a desire to make the very best end product possible, regardless of time, or cost.

Now with ISO certification, all restoration work is forensically documented, the customer regularly updated and the results pretty spectacular. “Quality control” is a term used a lot by Watts, as is “genuine”; the more that’s done in house, the more closely monitored every process can be. With Jensens now worth what they are, and a variety of customer demands coming in, flawlessness is pretty imperative.

So what are buyers after? As always, it varies by age, market and budget. Walbyoff speaks of cars rebuilt when values were lower with “bits of all sorts. It was unbelievable what you’d find. Newspaper, chicken wire, anything to make it solid.” It therefore becomes difficult to quote for a full restoration before the true horror of what’s there has been revealed.

There’s also been a recent change in attitudes towards the preservation of authenticity as numbers dwindle. The hand-built Vignale cars are cherished in Jensen circles, rare and exotic, though Watts tells of cars with those panels replaced by pressed items when time and money wasn’t invested in them – sacrilege of the highest order, surely. “Real life preservation” is what he calls it; even when cars are upgraded – brakes, alternators, stereos and suspension being the most popular changes – the aim is for building an Interceptor “how it always should have been, with discreet modern technology.”

Apparently the hand-built cars have 2cm tolerances, meaning there’s some leeway at least(!). So while Cropredy Bridge worked extensively on modernising Interceptors – up to and including paddle shifts and traction control – until 2012, the focus since then has been on a “structured approach” that “doesn’t detract from the Jensen feel.”

The change in attitudes from about that time has also come with an uplift in values, related to the scarcity; back then nobody would have countenanced a 3,000-hour resto job, the boys concur, because the value wasn’t in it. With a renewed interest in Vignale generally, and the Jensens as part of that, anything up to £200k can be asked for a perfect one; the demand for other models has been brought up with them, and so restorative work has become more sensible. FFs remains the most desirable, with Vignales the top of the tree, followed by Mk3s, 2s and 1s (in line with their rarity). Of Interceptors the Six Packs, Coupes and Convertibles are most sought after, then all others are broadly similar – it’s “on preference”, Matt reckons, in that an £80k Mk3 Interceptor might be worth the same as a Mk1, but is probably an easier sell because it responds better to modification. A Mk1, originally without air-con and better suited to the small wheels (and therefore brakes) is more of an acquired taste.

Speaking of which, it’s noted by the guys how a change in buying demographic is influencing what they make. They talk of the older owners “happy to be under the bonnet when things go wrong” being replaced by a younger buyer raised on modern, reliable luxury, and expecting similar of their classic. “If it’s halfway as capable as their Range Rover or Bentley, they’re happy,” says Watts. The younger buyers want to drive their cars, hence the push to reversible enhancements (and the work at present on independent rear suspension), that months are spent on developing.

The result of this fresh demand is that, while you’ll see a lot of Cropredy’s cars for sale with a few of its upgrades fitted, there’s also scope to go one step further. We are very much in the era of the restomod, and Cropredy’s take on it is the Interceptor CB, a car described as “the very best an Interceptor can be.” While there are some who will always crave originality – naturally parts are getting ever harder to find – some will also want the ultimate in contemporary performance. Cropredy is there for any such Jensen you’re after.

Sadly there isn’t an Interceptor CB to drive on our visit. Instead the pair made available to us are a blue S3 with uprated cooling, an electronic Edelbrock carb and bigger wheels, tyres and brakes, and a vehicle not far off the holy grail for Jensenistas – the SP. That’s SP for Six Pack, of course, thanks to its trio of twin-barrel Webers. It’s the most powerful of the Interceptors, 7.2-litres of burly Chrysler V8 muscle and the best part of 400hp. From more than 40 years ago. Perhaps one to build up to...

Driving an Interceptor is not like driving a modern car, which is where so much of the appeal lies. The key is analogue - obviously - and delicate, the start procedure nothing more complex than a turn of the ignition barrel. Even if it needs some goading, a few pumps of the throttle soon get it going with no hardship. You sit in vast armchairs, the chunky transmission tunnel and dash ensuring an oddly expansive gap between occupants, but a worryingly close relationship with a door that seems frail in comparison to anything from the 21st century.

‘Frail’ is the last word that comes to mind for the powertrain, though. Once that wand of a lever is in your chosen indent, the gear thunks through the car, leaving no doubt about what’s just happened. That’s how an Interceptor goes down a road, too, a wallop of torque, noise and caddish charm. You’ve heard the adage about modern torquey turbos only needing three gears when they have seven, eight, or nine? The Interceptor really does have just three, and only seldom wants for one more – and the shot of extra accelerative urge it would bring – such is its obscene pulling power. The Jensen rumbles, gurgles and growls through its revs, speed building impressively until – thunk – there’s third gear and it’s into a cruise.

Which is exactly what suits it. Accompanied always by an authentic, emotive backing track from eight cavernous cylinders and a commanding view out over the savannah of a bonnet, cruising through the countryside in a Jensen is a rare privilege. The temps are good, the fuel level still just about good, life is good – what a way to travel.

The Six Pack? More of the same. And then a little bit extra. More rumble, more get up, more go. It’s easy to see pretty quickly why they’re so revered, the musical malevolence from under the bonnet near enough worth the entry price on its own. Neither of these are sports cars – it would be a stretch to call them Sports GTs, even – through there’s probably more grip from the modern tyres than expected. The 17-inch wheels Cropredy often fits means a tad more firmness to the ride than might seem usual, with that offset by actually having some braking power and grip – swings and roundabouts.

Don’t forget, either, that heavy and large by the standards of the 70s is nothing four decades later; the steering is slow and the response… leisurely, but it’ll hang on more gamely than you might think. Cropredy’s work means the cars feel appropriately traditional and require an amount of concentration, yet are never overwhelming or intimidating – a clever balance to strike, and presumably a hard one to achieve.

Like so many of the very best restorations, the Cropredy charm lies in retaining what appeals about a car approaching 50 years old, while introducing sufficient modernity to complement the experience – not compromise it. You know, stuff like properly working air conditioning, radios that pick up DAB, rust-proofing that prevents rust, brakes that stop the car… Everything in a Cropredy Jensen that you touch, smell, hear and feel is pure Interceptor, now bolstered and enhanced by turn-key usability and smart contemporary fettling. For those enthusiastic about these arcane British sports cars, that’s as compelling a proposition as it sounds.

Search for a Jensen Interceptor here