"Please don't call me Mr Clubsport or anything like this," says VW's dynamics boss Karsten Schebsdat as we sit down to talk dampers, diffs and why

chasing, track-focused car the name, aero and racing seats suggest. He's keen to underline it's a team effort but, when pressed, admits that he wanted to leave his 'fingerprint' on the car. When you consider he started his career at Ford with the first generation Focus, moved to VW for the Mk5 Golf (including GTI) and enjoyed a spell at Porsche before returning to VW you'd have to say this is no bad thing. 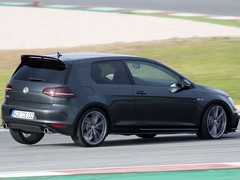 We'll let Karsten explain the VW hot hatch philosophy in the full transcript below but his opportunity with the Golf GTI Clubsport is an interesting one. Building performance cars for VW clearly offers huge opportunities in terms of legacy, resource and the kind of hardware at his disposal - from that fully

to dual-clutch gearboxes, active dampers and multi-link rear axle his team clearly has a very well stocked toybox. But with it come greater constraints too; VW is clearly a deeply conservative company where the edgy intensity of the Megane Renaultsport or wild looks of the Civic Type R simply wouldn't be acceptable.

So, why isn't the GTI Clubsport the stripped out track car we thought it might be, how does it compare with the all-conquering R and exactly how does that fangled and much misunderstood VAQ front axle actually work? Over to Karsten...

PH: Is the VAQ system, as many people think, a Haldex four-wheel drive front axle with the rear drive assembly blanked off?
Karsten: "Definitely not; it is a unique component because you're connecting the left and the right wheel, not the front and the back." 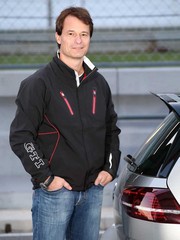 From Ford to VW to Porsche back to VW

OK, so is it fair to say two-wheel drive cars with VAQ actually have more sophisticated torque distribution than Haldex four-wheel drive ones like the Golf R?

"It's another system, let's say it this way. The big advantage is you can implement a type of torque vectoring and introduce some yaw motions into the car."

Which, presumably, you can't do in the R with its less sophisticated, brake-based XDS+ 'electronic diff'?
"You can do it with the XDS+ system and you can do it in a certain way with the transfer of the traction forces to the rear. But it is not a classic case of torque vectoring; torque vectoring means you have different forces on the left and the right hand side of the car."

So VAQ gives you true torque vectoring ability?
"I think the definition is a little bit different but if you have different drive forces on the inner and outer wheel then it is, in a certain way, a function that significantly alters the yaw motion of the car."

Given VAQ takes information from steering angle, throttle input, dampers and all manner of other sensors have you tuned it differently for the GTI Clubsport?
"Generally the software status is exactly the same. But there is a lot of interaction of the chassis set-up and the behaviour of the tyres with VAQ, so it feels different; the car feels more neutral. 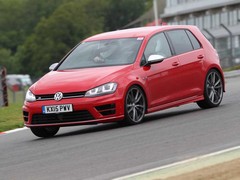 R is heavier and less sophisticated in chassis tech

Is it faster than the R?

"To be honest we did not compare them 100 per cent on the same track; we know for instance on the Nordschleife the GTI Performance will lap at around 8min 26sec and the R is about 8min 14sec. We will test the Clubsport there and we think it is at least as quick as the R."

Are you going to go chasing records like your colleagues at SEAT?
"Let's wait and see!"

The Brembo brake option on the SEAT is critical to its circuit ability; why is it not on the GTI Clubsport, given this is supposedly the most track focused Golf we've ever seen?
"We discussed this. And we decided when you look at the customer who is driving this car it is not often on the racetrack." 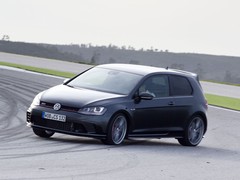 Should be as quick as the R on the Norschleife

That's interesting; although it's badged Clubsport you don't necessarily expect it to be used on the track?

"I think you can use it as you have today [at Portimao], you can do some very very hot laps and I think if you look at the lap times you would be surprised, even with those brakes. Yes you can be even better with different brakes but we think that is enough right now for that car."

What difference do the lightweight 18-inch wheels make?
"With the base tyre and with the lighter wheel it's definitely more comfortable and you can feel it a little bit in the steering because the rotating mass is reduced as well. The personality of the car with the Bridgestone 18-inch tyre is very similar but it's another level of performance with the Cup tyre with respect to lateral acceleration and steering angle."

What kind of difference would this make on a lap of the 'ring?
"About five seconds."

If you were ordering a GTI Clubsport what would your specification be?

"My personal choice? I'm a fan of manual gearboxes and I would like just two doors and as light as possible."

So would you have the 18-inch wheel?
"That depends where I would like to use the car for; just for the roads every day 18-inch is fine. But I am a big fan too of the Cup tyres. So maybe at least I would take the Cup tyres, but this is my personal taste. I would like to have the active dampers too."

You don't agree that passive dampers are the more purist option?
"I would have said this 10 years ago when we started with adaptive dampers. But now there are so many advantages; there's a lot of interaction with steering and VAQ but on the other hand passive dampers are very nice as well. Even on British roads the standard set-up will work very nicely because we did a lot of work on the balance between rebound and compression cycles, especially on very uneven roads." 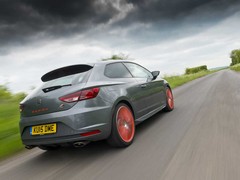 Cupra still has the edge in track hardware

So in the active damper's range where does the passive damper sit?

"It's very difficult to say but it's very similar to the Normal setting. To explain it further, we have a big spread with the adaptive damper so we can be softer than the normal configuration, much softer, on the one hand. But on the other, when you drive in the Comfort mode, it can in some situations be stiffer than the standard set-up. It's always depending on the status of the car because we can very quickly increase the amount of damping."

How does it actually work?
"It's a hydraulic system with a bypass valve we can open and close very quickly."

Is the spring rate the same?
"It's a little bit higher with the adaptive dampers." 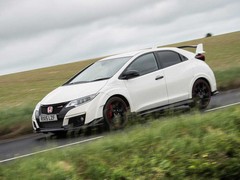 Type R has a rather more extrovert aero package

Is there less understeer in this car?

"Compared to the base GTI? Definitely. We have changed the roll stiffness distribution so we have more neutrality. We have softened the front bump stops and increased the spring rate on the rear to give the car more mechanical grip on the front end so we have less understeer."

How important is the multi-link rear axle compared with the twist beams used by most rivals?
"I think it's a big advantage, especially when you compare the range you can implement into the car. With respect to lateral dynamics with a twist beam you have only two bushes that connect the axle to the body and you have a lot of functions to implement into those bushes. Right now with multi-link you have separation of the lateral control to the longitudinal control so the spread is much, much bigger and the stability level is a little bit higher generally. We have reached a very high level with the twist beam on our other cars but we would not do the multi-link if it was not better! There is more lateral stiffness and you can reduce the slip angle on the tyres - in the comfort mode it's even better because you are softer in a longitudinal direction." 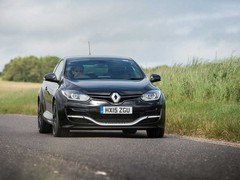 How fast do you have to be going for the downforce to make a difference?

"I think when you drive the Clubsport versus the normal one you will feel the difference above 70mph. The quicker you are the more difference you feel!"

Can you tell us how much downforce there is?
"I know those figures but to be honest we have made lots of comparison tests in different wind tunnels and the wind tunnel at Wolfsburg works differently from other ones, so you get different figures."

The Civic Type R makes a big selling point of its aero and it looks a lot wilder...
"Much wilder, yes. We have not measured that car, I've driven it but do not have comparison figures, not even relative. I'm sure it has downforce though."

Have you had demand from enthusiasts for a genuinely stripped out car?
"I think there are some guys who are looking for that, if we would get the task to do it we would like to."

Is there potential for VW to take some of that business that might otherwise go to the aftermarket?
"Maybe, we wait and see. I cannot look too close to the future."

The best used Mercedes-AMG cars to buy in 2021