Changing of the hot hatch guard - but can the Megane still end on a high? 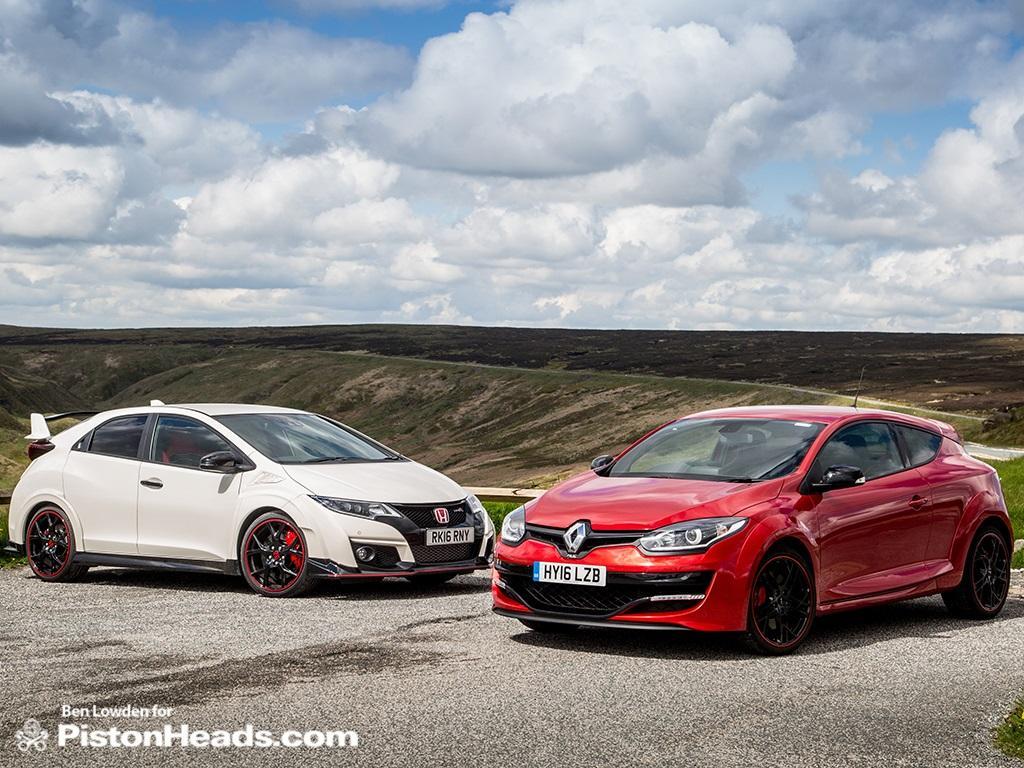 If Civic Type R versus Focus RS turned out to be a relative walkover for the Honda on the day this one promises to be a more difficult test. Especially given the fact the last time we put Civic against Megane Renaultsport we awarded victory to the Renault.

Things have moved on though. At that point we'd had only fleeting experience of the Civic, having 'stolen' the car for that test from our colleagues on Autocar for a day. We only drove them on the road, concluding, "On a circuit you'd suspect things might be a bit different - if that's not an excuse for a rematch nothing is."

That moment has come, our battleground this time Blyton Park's compact Southern Circuit.

We've now got a Type R on the PH Fleet, some miles on road and track under our belts and the recent experience on Anglesey circuit fresh in the mind. In response Renault has the latest 275 Cup-S Megane, which is more a trim level than actual new car and represents the final fling for the car before replacement. Indeed, production ceases at some point this month.

Consider it a 'best of' compilation, wrapping up stiffer Cup chassis with the diff and 10hp bump to a Trophy-level 275hp. The starting price of £24K is an astonishing £6K less than the base price for the Civic, the on the road prices of these two cars eventually just £405 apart thanks to the Renault nabbing all the toys in the cupboard, up to and including £2,000 Ohlins dampers, £1,350 Recaro seats and a sturdy £2,500 for the Akrapovic titanium exhaust system. Unlike Honda, Renault also offers a Michelin Cup 2 tyre option, this playing field levelled by virtue of our test car coming on the Bridgestone Potenza option on the fugly 19-inch wheel. The Honda, for its part, arrived on fresh Continental road rubber after chewing through its fronts at Anglesey.

Given the Megane's been on sale since 2009 I'll work on the basis you know the general gist by now and cut straight to it. There are certain 'must haves' when speccing one, the diff-equipped Cup chassis and Recaros definitely on the list. There is a (relatively) softer 275 Nav for £26K with various convenience features bundled in and the £1,350 option of adding the Cup chassis if you want. Whichever you go for the stiffer dampers and diff are essential for making the Megane feel like a Megane.

£2,500 for the Akrapovic titanium exhaust? It sounds nice and saves 4kg but the branded carbon tip is merely a bumper trim 'falsie', rather detracting from the supposed pose value. If it's an either/or that money is much better spent on the Ohlins Road&Track dampers, the kind of investment in chassis ability that really defines the Renaultsport mindset. Whether you appreciate the intricacies Dual Flow Valves, sliding damper cartridges and rally car style hydraulic bump stops is moot; their impact on the car's behaviour is transformative.

As a pre-Blyton warm-up Ben and I hit the savagely bumpy moorland roads across Saddleworth Moor. Given the low-speed jiggling you'd expect roads like this to upset a stiffly sprung car. You'd be wrong.

Anyone sneering at the Megane's relatively puny spec sheet stats needs a ride in an Ohlins-damped 275 to appreciate how damping, not horsepower, counts when things get rowdy. The harder you hit the bumps the better it rides too. Out here you get the lot - sweepers, hairpins, potholes and compressions that'll send you thumping into bump stops. Before rebounding and unweighting the wheels just at the point you were hoping to turn in. With the Ohlins it's like the road being rolled flat into perfect, freshly laid tarmac, freeing up thinking time to appreciate the feedback through wheel and Recaro-gripped hips. It never feels aloof or detached though. You still sense - and can play with - weight distribution as required. It simply filters out the bad stuff, giving you opportunity to exploit the good bits.

On the track it's equally impressive. Here you're relying more on the damping support than bump-swallowing ability. In partnership with the neat, accurate steering the Megane is absolutely pin-point accurate. You can place the car so precisely, trailed brakes into the corner permitting perfectly nailed apices each and every lap with less of the torque steer on exit than noted last time in the Cup 2 shod car. This is classic French hot hatch - a pointy front end combined with a mobile and adjustable rear that rewards commitment with incredible pace at every phase of the corner. And if you want it sharper still the Megane maintains the Cup tyre option in hand.

Throw in perfectly placed pedals, a crisper initial throttle response than the Civic and a slick gearshift and you have a car that responds as well to a flowing, precise driving style as it does a ragged, bung it in on the brakes and see what happens approach. And that's what marks it out in this day and age - it gives you options. Too many cars these days insist you play by their rules. The Megane gives you a blank canvas on which to express your personal driving style. Barrel rolls into Schwedenkreuz included if ambition gets the better of ability...

Look for a used Megane Renault Sport in the classifieds!

From the previous section you'll have a sense of the battle the Civic faces here. Is it up for the fight? Too right it is.

Driven back to back on the moorland roads the Civic actually feels a little woolly in its standard configuration. Never thought I'd be in the position to say it but, yes, it feels a bit soft and vague, turn-in less precise and the dampers struggling to keep the grip consistent through the rapid-fire compressions and rebounds. Not to worry, there's an app for that! Yes, the +R setting we've previously said is 'too stiff for the road'. Not out here in pursuit of a hard charging Megane.

With the Sachs-supplied dampers in their 30 per cent stiffer setting the Civic is back on form, composed over the bumps and absolutely nailed down through the corners. Turn-in isn't quite as instinctive as the Megane's and there's more torque feedback through the wheel under power, an interesting comparison given both cars use equivalent helical locking diffs and offset steering axis front struts. And last time, on less challenging roads, we called it the other way around.

On road and track what it lacks in those last few per cent of composure it more than makes up for in sheer lunatic pace. The engine has far more reach than the Megane's, whose premature redline means frequent chu-chu-chuffs into the soft limiter. The brilliant driving position, grippy seats, convergence of shift lights in the upper display, shorter gearing and lovely, wrist-flickable, shifter contrive to make a hectic, thrilling driving experience entirely in keeping with the mad looks.

I love the fact Honda has adapted the much-loved VTEC switch to the turbo age with a noticeably boosty feel, the engine feeling significantly punchier and more turbocharged than the flat, linear Renault unit. The flywheel effect is noticeable though, meaning you need to lift a little in anticipation of upshifts to avoid an unflattering flare of revs when you dip the clutch. You adapt though, the whooshes and chuffs from the dump valve adding to the fun.

'Racing car for the road' can usually be dismissed as marketing BS but in the case of the Type R it actually feels a genuine boast. At Anglesey the aero could actually be felt stabilising the car on the fast sweepers; at Blyton the firmer brake pedal than the Megane means a racier style of screaming up to the turn before stomping on the brake with all your might feels entirely natural. You feel the back end go light and weave around a little when you do but the Civic remains less playful than the Megane and less adjustable on the limit. Corner entry isn't as precise either, the slight muddiness in the steering meaning you can't nail the clipping point quite as neatly as the Megane. It's more likely to be bounced off-line by mid-corner bumps too, proof once again of the quality of the Ohlins dampers in the Megane. And on exit you're more likely to feel the corrupting effect of the extra power through the wheel.

It's so goddamn fast though you'll accept these as trade-offs, the Civic's readiness to respond to an aggressive, attacking style no less astonishing with increased familiarity.

It's an agonising choice. For all the similarities in chassis hardware and spirit the Megane and Civic represent two opposing views of how to make a hot hatch go as quickly as possible. In that respect you can see it as a changing of the guard; as the Megane heads off for retirement it can be seen to be handing over its purist crown.

So we should be relieved. Because we're unlikely to ever see another mainstream hot hatch as driver-focused as the Megane, certainly if the Clio is an indication of Renaultsport's direction of travel. And the Honda picks up the baton.

The final decision will very much come down to your personal priorities; where the Megane makes few allowances for anything other than maximum attack the Civic is actually relatively refined when dialled back into standard mode, has five doors, a massive boot and a sense of practicality amusingly at odds with the bonkers looks. But it's also properly, properly mad and quick enough to embarrass far more exotic machinery. A Type R on track rubber would be a very interesting prospect indeed...

It comes to this. Are you in it for the firepower or the feedback? The Type R has the former to a giddying degree and never gets boring. For putting the Focus RS's crowd-pleasing antics under scrutiny, forcing VW to draft former 911 GT3 chassis engineers to build the GTI Clubsport S and putting the hot back into hot hatch it's a new-school hero. The one thing it doesn't do, and the Megane still trades on, is nuance. And for that ability to reward at a range of speeds, up to and including flat out, the 275 Cup-S still gets the nod, if only by the narrowest of margins. Slower, older car wins. Again.