Home/Features/Features/How Britain made the Clio 182 Trophy

How Britain made the Clio 182 Trophy

Remember when Renault Sport could do no wrong? Well, there's a good reason for that... 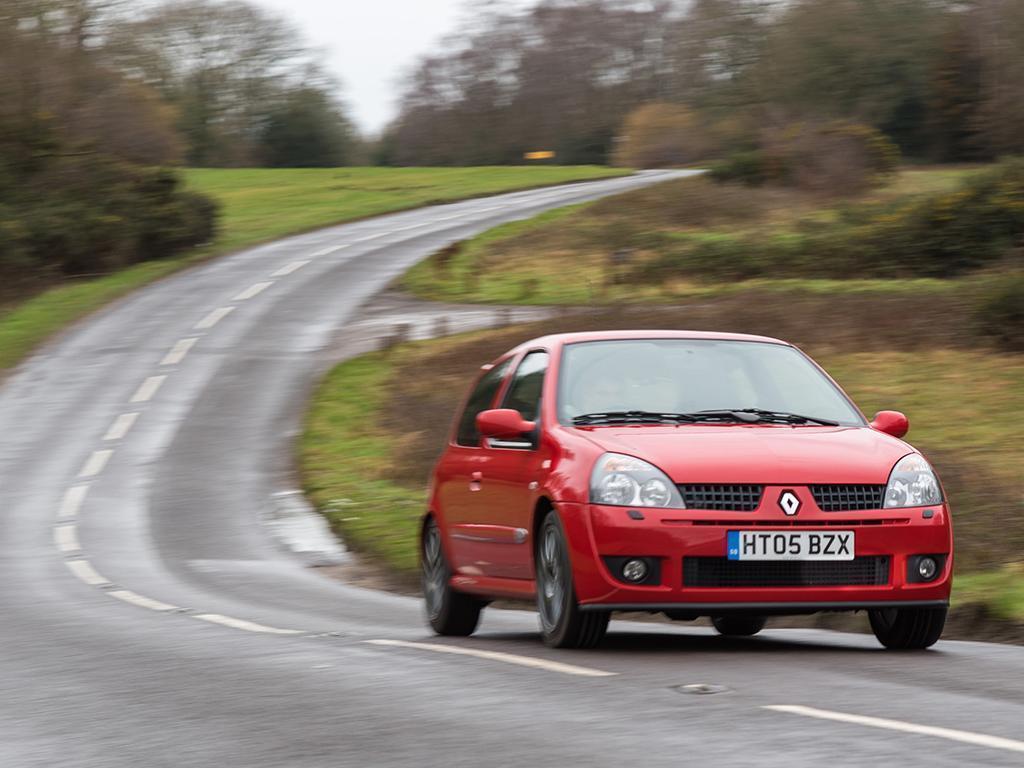 The Renaultsport Clio 182 Trophy is a PH Hero in its purest form; a great hot hatch made better. Naturally it's the engineers in Dieppe who must get all the credit for making it that way - but the limited edition model owes its existence to the UK, where fifteen years ago plucky buyers were quenching their thirst for affordable front-drive performance cars with as many as 3,000 182 Clios a year.

That's according to Graeme Holt, former Renault UK press relations manager from '94 to '07. He explained to PH that the British fondness for French va va voom meant that Renault's domestic market played second fiddle to les rosbifs when it came to the output of its performance division - especially when it came to the run-out Clio II.

"Normally, a [non-domestic] country's input into what's coming next is limited to a few personalisation features specific to your market, things like standard-fit sunroofs," says Graeme. "So for product planning in the UK to be given full control over what's put forward to Renault's Paris HQ was almost unheard of. But with a team that understood the UK market's hunger for proper driver's cars, we had a few ideas as to what would make for a great final Clio II variant. Of course, it helped that a Brit, Steve Marvin, was director of Renaultsport at the time, to really argue the case."

Marvin had joined Renault from Tom Walkinshaw Racing after he'd helped develop the first Clio V6. No doubt it helped that Renault was also in its heyday, with a Formula 1 team on the rise, a massively popular Clio Cup racing championship up and running and a multitude of performance rivals vanquished. Moreover the 182 nailed the hot hatch triumvirate: it was cheap, it was pretty and it went like the clappers.

Holt, Marvin and Jeremy Townsend - formerly brand manager for Clio in the UK - formed their owned triumvirate, which aimed to keep the celebratory model true to the 182's values. The team were adamant that there ought not to be a significant increase over the 'regular' 182hp Clio's £14,700 (about £23k today) starting price. So they "decided to start development with the Cup version, which lost a few optional extras but meant the base price was lowered to £13.8k" to allow room for some special additional bits tailored to British buyers - buyers that would care less about xenons and part-leather back seats, and more about an improved driving position and even sharper handling.

It was therefore decided the cloth-clad back bench would be used alone with Recaro Trendline front seats on 10mm lower mounts. Holt says a two-seat version was absolutely out of the question because this hot hatch "had to remain more practical than the MR2" et al, and that even lowering the seats further would not have been possible given the re-homologation costs. It was the same story for the naturally-aspirated F4R 2.0-litre engine. Further work would have adversely affected the target of keeping the consumer price down - not to mention cause a headache when team UK reported progress back to Paris HQ. Anyway, at just 90kg more than a metric tonne, it's not like the 182 needed more get up and go. Keeping development cash in the bank enabled more important things like exotic chassis options...

We're talking, of course, about the Trophy's party piece, those Sachs dampers. They were to be bespoke to the Clio, with Marvin's team developing them specifically for the UK-bound 182, lowering ride height by 10mm but also, thanks to the motorsport-aping external reservoir, better compliance. Hydraulic bump stops were the cherry on top, helping to vastly improving front end agility and slashing understeer while ensuring that the top-spec 182 was suited to British roads. The team recognised that UK buyers were also regular track day attendees, so adjustability was built into the setup to cater to the even harder demands of circuit time.

By now, the car was looking good technically, but it needed to stand out aesthetically, too - while adhering to budgetary constraints. The fitment of Speedline Turini wheels, though, was a legacy of development work; the prototypes were fitted with the 172 Cup wheels (or 172 Ragnotti, as it was called outside of Britain) and the team decided to stick with them on the finished model. Only the offset and colour of the 16-inch wheels were changed for the Trophy, to give it the more distinct look, which was completed with its bespoke paintwork.

"The factory was offering three choices for colour: Black Gold, which had just been introduced on the 182, a flat white or Capsicum Red." White was off the table because it was synonymous with Honda Civic Type R and Porsche RS models. Holt believed Renault had to be different, so he chose red. It's a shade that's remained unique to the 182 Trophy in Renault Sport's lineage to this day, so there's certainly no mistaking the model with other variants. A slightly larger spoiler also separated the car from its siblings, without attracting attention from the homologation office. But essentially that was it - voila, a run-out Clio for Britain.

Except it wasn't, because while France's product team opted to not request any examples for the domestic market, Switzerland's regional manager was keen to get 50 left-hand drive models shipped there. Hence the final build number of 550, with the remainder headed to Britain. Holt says the final example of Renault's brilliant attention to detail in the Trophy came with the plaque, each of which was individually numbered, rather than saying 1 of 500, as other manufacturers do to save cost. It was Holt's idea for the model to wear the Trophy name - a homage to Renault's race cars - following the trend he'd set by naming the homologation Clio 172 'lightweight' the Cup for Britain, thereby linking it to the racing championship. (Other European countries got the 172 Ragnotti, because the competition version was also eligible for rallying and Jean Ragnotti had famously won the Monte Carlo Rally for the marque with the 5 Maxi Turbo).

Paris went on to adopt Holt's UK market names into its RS line-ups at later stages, with Cup still representing the sportier chassis setups and Trophy the peak. The latest Megane proves that Renault Sport has lost none of its finesse when it comes to perfecting a front-drive chassis - although catering to the British market is probably no longer top of the agenda. Holt notes that when the Clio IV came along in EDC-only form to make it more appealing to Renault's domestic market in 2012, it killed the love affair dead. Sales in France didn't make up for loss and the car's previously sterling reputation suffered.

But the legacy of the 182 Trophy is untarnished. It remains a three-door testament to a certain way of doing things, and stands tall in many best-ever hot hatch lists - not least our own. Nice to know that the people who voted Capsicum Red supermini into its vaunted position - i.e. you lot - were essentially the same bunch who helped will it into being in the first place. And thank God you did.