Impressing in isolation is all well and good, but how does Kia's latest fare against BMW's fastest 4 Series? 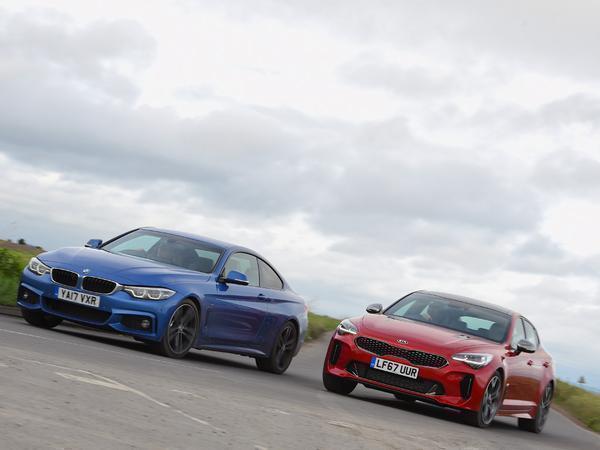 Already you may have noticed a problem with this comparison. Yes, it's another HiChroma Red

, when what we really want to see is Sunset Yellow. Or Pearl White, at least. Oh yes, and it's the wrong BMW... 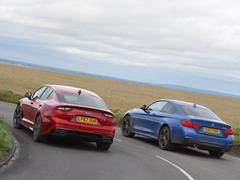 Shapes are different; aims are quite similar

The 440i Gran Coupe is probably the clearest rival the Stinger has, being a four-door coupe saloon thingy with six turbocharged cylinders up front and power going to the rear wheels via an eight-speed automatic gearbox. Sadly BMW doesn't have one of those on its press fleet - when did you last see one, come to think of it - so a two-door 440i is going to have to suffice. Fortunately, given this is PH, we don't need to worry too much about rear-seat access or footroom when wearing your best brogues or the quality of the electric window switches - we're mostly concerned with how these cars drive, so number of doors shouldn't matter too much.

In fact, where better to start than with the dynamics of our two protagonists? Frustratingly given the demands of a photographer's lens and a road tester's belly, this was not an exhaustive cross-country assessment, but there was sufficient time to establish pros and cons in both cars.

The Kia is good; very good, in fact, with certain attributes that are superior to the BMW. It feels a cohesive, well-rounded and accomplished sports saloon, with no staggering highs but crucially no terrible weaknesses either. The damping stands out immediately, body and wheel control very well assured on a British B-road - it's fluid yet precise as well, the car allowed to move yet never feeling to lurch or lose its composure. With a car as big as the Stinger you need confidence to drive it briskly and the way it flows with a road, with compliancy and authority, sees to that quickly. 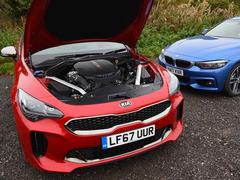 "Oh, you have a turbo'd six-cylinder engine?"

That twin-turbo V6 ensures you'll certainly be moving too, its burly mid-range and willing top end giving the Kia a generous turn of pace. It feels well suited to the automatic gearbox too, though even before switching to the BMW some hesitation and inconsistency in the powertrain's decisions can be felt.

While the Kia's steering isn't fantastic in any of its drive modes, none of its rivals - BMW included - have particularly nice systems either. It feels like criticising a politician for their dishonesty, or a footballer for their extravagance - you may not like it, and things probably were better in the old days, but lots of them are similar now and it's become a fact of modern life we're just going to have to deal with.

Pleasingly however the Stinger's Brembo brakes are strong, grip is good and, when that grip subsides, the Kia is as balanced and approachable as you would hope from a front-engined, rear-wheel drive car with a nice, long wheelbase. Having a standard limited-slip differential - which the BMW does not - gives the Kia an advantage, power apportioned decisively across the rear axle and giving you as the driver just enough messages about the car's rear-wheel driveness. It's a satisfying, engaging car to drive fast, the Stinger, and that deserves to be applauded. 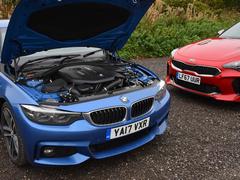 To that BMW, then. Crumbs is it fast. Power might officially be down on the Kia but its weight advantage is in the region of 150kg, and BMW horsepower often feels a bit stronger than the numbers might suggest. With a sharper, slicker calibration of the ZF gearbox than the Kia, the 440i fairly romps along, big numbers appearing jolly fast with a reasonably pleasant straight-six soundtrack alongside.

Thing is, BMW doing a six-cylinder engine and automatic gearbox better than Kia shouldn't really come as a surprise. The surprise comes from the fact that the Korean car might be more enjoyable to drive than the German one.

The 4 Series' adaptive damping really lets it down, without a mode that really ties the car down with any conviction. In the more comfortable settings it feels aloof and wallowy, while any attempts at being more assertive make it feel awkward and fidgety. The Kia isn't perfect, but its suspension does a better job of dealing with its (additional) weight and size than the BMW's.

The steering suffers similarly, though we've kind of covered steering with the Kia. Underneath there feels to be a capable and credible sports coupe, yet the 4 Series seems totally unwilling (or unable) to make the driver enjoy those sensations. It's distant and a bit uninspiring really, which would be a disappointment from any manufacturer - leave alone BMW. 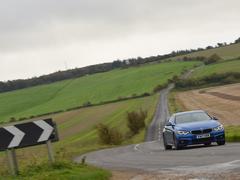 Beemer OK here, but nothing more

To have such a strong powertrain in a an attractive luxury coupe should be a perfect mix but, as proven

Dan Prosser is currently running, contemporary fast BMWs can leave a fair bit to be desired as ultimate driving machines in their standard form. It's all the more frustrating because of the signs of promise: the driving position here is lower, in more supportive seats, than the Kia, the driving assists intervene in a less heavy-handed way and the manual mode for the gearbox is more intuitive. As something to drive, however, the BMW isn't always tremendously impressive.

However we must be realistic; these cars will not be bought solely on their B-road aplomb, much though we'd like to think they are. Inside, despite being relatively old now (or familiar, if you want to be kind), the BMW feels superior to the Kia in terms of material quality and build. The infotainment is more responsive, the displays are sharper, that sort of thing. The Kia is very far from bad, though the interior is where the BMW holds a key advantage.

Does that matter to you? If it does that much you'll likely never consider a Kia alternative, even if it came with a V12 that did 40mpg and cost £20K. This 4 Series delivers nothing we didn't already know about BMW's current line up, with everything positive - and rather less praiseworthy - that that entails. What the Kia does, on the other hand, is deliver not only something new and exciting for the brand, but also for the sector. The Stinger doesn't simply appeal because it's different, it appeals because it's a car of real quality, ability and charm. 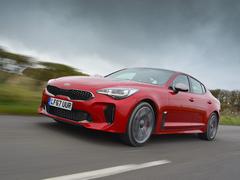 Many will likely dismiss it; their loss

Of course a 370hp V6 Kia will always be a tough sell in the UK, particularly with the price, CO2 and fuel economy numbers being what they are. No doubt the BMW performs significantly better there, and has that propeller of assumed prosperity on its nose too. However if you are in the position to consider something alternative, and fancy the idea of a traditional rear-drive saloon like the Germans used to make, the Kia delivers. The BMW will continue to appeal thanks to its looks, interior and powertrain, but the Kia deserves to succeed for highlighting where that 4 Series falls surprisingly short.