Two different supercars, with the same DNA. But which makes the better PH buy? 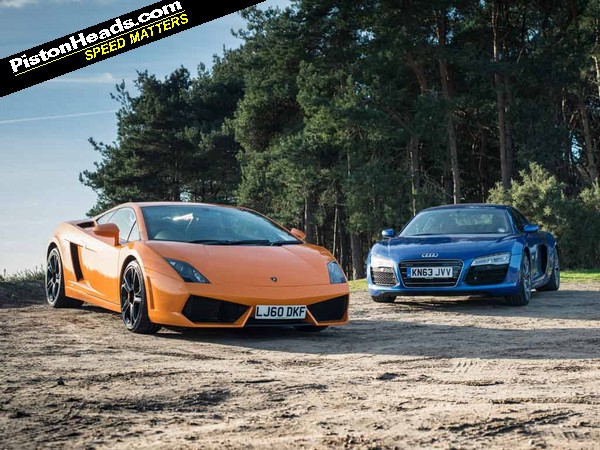 What makes a car a supercar? An exotic engine is a fundamental prerequisite of course, whilst a wide, tarmac-hugging profile is also pretty essential. And naturally, some breath-taking performance is a must have. But aside from these core values, opinions start to differ.

Is dramatic styling absolutely essential? What about a badge steeped in motorsport history? Should the exhaust sound like a full-blown riot the moment you start the engine? And what about layout - does the engine have to be in the middle? Should top speed or acceleration be the critical performance measure?

Amongst the PH fraternity there is of course a plethora of equally valid, yet totally divergent and strongly-held beliefs. Just as well then that there are now more takes on the supercar than ever before. A veritable heyday for wealthy UK performance car buyers.

Two of the current favourites, offering contrasting experiences, herald from the very same stable - Audi's V10 R8 FSI Quattro and Lamborghini's recently-demised Gallardo LP 560-4. Secondhand prices overlap temptingly too and both are guaranteed to garner envious glances for years to come. So which makes the best PH buy?

The Gallardo changed Lamborghini forever. Prior to its launch in 2003 the Bologna-based niche manufacturer counted sales success in hundreds, not thousands. But 14,022 Gallardos later Lamborghini (under the protective wing of the Volkswagen Group family) has moved into the big time, rivalling Porsche and Ferrari not just in terms of kudos, but crucially in terms of sales too.

That original 5.0-litre Cosworth-tuned Gallardo was very much targeted against the Ferrari 360 and its success forced the Maranello master to up its game with the F430 and 458 Italia. The second-generation Gallardo had to be even better than the first, and it was.

And despite the subsequent release of numerous four-wheel drive and rear-wheel drive Coupe and Spyder special editions, not to mention a 2012 facelift, the LP 560-4 remains the most popular version.

Meanwhile, as Lamborghini's Gallardo was giving Ferrari something to think about, Audi had the Porsche 911 Turbo firmly in its sights. And in December 2008 its R8 5.2 FSI Quattro was finally revealed, complete with a slightly-muted version of the Gallardo's V10 powerplant. Lucky UK buyers got their hands on the car in early 2009 and - with a price tag of a smidgen under a hundred grand - could claim that their car offered better value than a Gallardo. The spec was certainly similar, with more than £10,000-worth of R8 V8 options fitted as standard - like magnetic damping, sat-nav, metallic paint, Nappa leather and heated seats.

And just like 911 Turbo, these cabin creature comforts accompanied a relatively cosseting ride and styling which was intended to impress, rather than shock.

Performance wasn't far short of that delivered by the Gallardo - or the 911 Turbo for that matter - and any lingering questions over the R8's right to junior supercar status were finally blown away. A £20K-plus premium over the V8 model meant the R8 5.2 FSI Quattro was never going to be a huge seller, but a very happy 480 UK buyers have so far bought the Coupe version. And the introduction in 2012 of the S-Tronic seven-speed double-clutch transmission has made the V10 R8 even harder to resist.

Sometimes, despite sharing common genes, close relatives can look really very different form one another. And so it is with these two Audi-based cousins.

Underneath of course, we know that a myriad of mechanical and electrical components are almost certainly identical. As expected neither manufacturer would be drawn on specifics - Audi admitting that 'Group synergies are utilised' whilst Lamborghini agreed 'We use Audi competencies as appropriate, for example in the use of aluminium, and some shared hidden components.'

Meaning presumably most of the engine, four-wheel drive system, original six-speed transmissions, the basic chassis and much of the associated wiring too? The cabins also are remarkably similar, in spite of some different switchgear.

But from the outside these two cousins, with distinct brand values to protect, hide this common DNA very effectively. Sure they're both mid-engined supercars with gaping intakes, super low stances and near-identical performance stats, but the external styling differences really do set them apart. A true Lamborghini, the wedge-shaped Gallardo is all sharp edges and angles; whilst the curvaceous R8 with its linear side profile and corporate nose is more altogether more cuddly - with more than a passing resemblance to the TT RS. But different though these two may appear at first glance, like brothers in arms they have met more traditionally big-selling supercar rivals - Porsche and Ferrari - head on.

Looks-wise however, these two remain poles apart - as indeed they should. After all, one heralds from a stable famed for lurid-coloured fantasy cars whilst the other, well, doesn't.

But Audi has - in more recent times - gained some serious kudos for its explosive yet understated RS models. Although for those of a certain age that four-ringed badge is just as likely to evoke images of impressively-built executive cruisers as it is gritty rally-hewn Quattros, or indeed a certain Le Mans-winning race car bearing the same R8 name.

And that's the rub. The Audi is a brilliant drive, but does it really possess enough of a wow factor? Especially when there are so many similar-looking V8 versions already on the road.

The R8's driving credentials however are undeniable. Potent basal torque migrates into a sparkling metallic top-end as the V10 propels the R8 forward at lightning speed. The steering communicates eloquently, whilst grip, braking and handling are all exemplary. And the ride - for a junior supercar - is a real revelation. The same however cannot be said for the Gallardo.

Every imperfection is relayed instantly to the driver and, although the leather sports seats are absolutely spot on, a long drive on typical UK B-roads may eventually take its toll. Stick to a shorter journey however and the experience is bordering on awesome.

For some reason the Lambo's engine explodes into life (where the Audi's merely starts) and initial acceleration feels feistier. The Gallardo offers more in the mid-range too, whilst still delivering a similarly spine-tingling howl at high-revs. With less weight and a tad more power is does feel that bit quicker - although on paper the difference may be minimal. And when you are eventually forced to slow down or come to a stop most of the glances you receive will be of pure admiration, rather than tinged with jealousy.

Naturally, being a Lambo, the rear visibility isn't as good as the Audi's (that higher rear-end compounds the problem when parking in tight space) but hey, that's what the rear-facing camera option is for. If you can afford to buy either of these cars then you can easily afford to have one retrofitted. But you may need to consider other ownership costs before making a final decision between these two siblings.

With a secondhand entry price of around £60,000 the R8 V10 surely makes a tantalising alternative to a used Porsche 911, or Nissan GT-R. Compared to a Gallardo LP 560-4 of a similar age however, buying the Audi will save you in the region of £20,000. The question must be - is this a strong enough argument to swing the balance in the Audi's favour?

According to market experts CAP a typical three year-old 20,000-mile Audi R8 V10 loses less in absolute value (£46,105 versus £68,100) compared to the Gallardo, but sheds more in relative terms at 55.2%, versus the Lamborghini's 51.7%. Then you need to factor in ownership costs - Audi labour rates are cheaper whilst the R8 will set you back less to fuel and tax too. But are these fiscal machinations likely to prove a game-changer for most supercar buyers? Probably not.

Don't however be under the misapprehension that these supercars can be bought, or run on a budget - a new engine for example could set you back £60,000 in either. So perhaps the real question should be: Do you prefer your supercar mild, or wild? Should it be lairy loud or discreetly distinguished? Do you like your V10 naughty, or nice? What a wonderful conundrum to face. Perhaps that's what makes a car a supercar?