This millennium has produced some awe-inspiring M5s; which is most memorable? 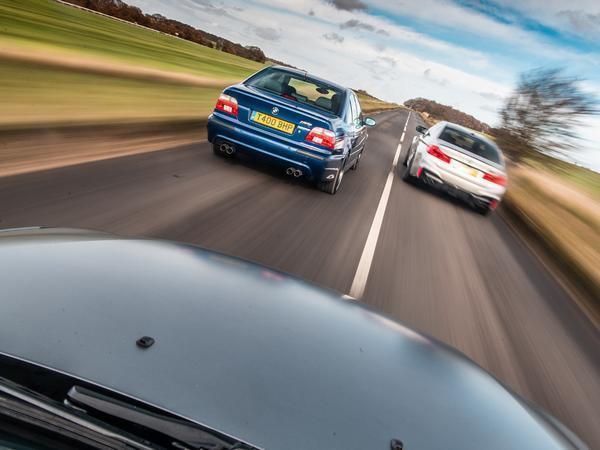 Bringing together the best BMW M5s of the last 20 years doesn't really require any justification. Because, well, no car has better defined or dominated the super saloon segment since the turn of the century, or indeed since the very first M5 arrived in the mid-1980s. The test could well be conducted on nothing more; a celebration of an icon that - if what's said about the new Competition is true - is right back at the top of its game.

For something more tangible though, beyond driving M5s because M5s are great, let's call this an investigation into exactly what has changed - and what might have endured - across two decades and four generations of M5. (Fourth being F10, but that didn't feel worthy of inclusion here.) Since the E39 arrived in 1998, the M5 has gone through naturally aspirated V8, V10 and twin-turbo V8 engines as well as manual, automated manual, dual-clutch and torque converter auto transmissions just for starters. Seemingly everything has changed bar the M5 remaining a four-door saloon - and even then a far bigger, heavier one.

Therefore it makes sense to work through chronologically; handily that puts the E39 up first, which wouldn't be a hardship whatever the rivals. There's no escaping the fact it enters the test wearing the 'best M5 ever' tag, one that almost feels like a burden now. The E39 stands so revered, that it's as much deity as driver's car. And we all know where a pedestal gets you.

Mercifully, its imperfections are obvious enough. That recirculating ball steering set up really doesn't deliver the sort of feedback or incisiveness of the very best. The S62 V8 always remains more muted than is really ideal. And, er, well... y'know, they're quite expensive now. There are probably other things, too. Must be.

Oh alright - the E39 is superb. Always was; always will be. There was the potential that it could disappoint, given its standing, but the rep is more than deserved. Why? For the desperate want of a better phrase, there's a 'rightness' to all that the M5 does and is - amount of power to grip, gear ratios to performance, damping characteristics to weight, overall size - that makes it feel spot on for nearly every situation. It's cohesiveness, really, but that seems to sell short the E39's compelling spread of talents. Moreover, the trait is one familiar to many cars from that era, icons that are relatively simple nowadays yet boast so much in such perfect harmony that they impress 20 years later: Ford Puma, Clio 172, 550 Maranello, that era of Evo and Impreza, the Lotus Elise and so on.

For driving the E39 in 2018, it means that on a motorway it delivers great refinement (because the wheels are relatively small), good comfort (because it's on one set up, that isn't for track) and incredible visibility (because it doesn't have girders for pillars). On a B road there are compact dimensions that make it feel wieldy; a perfectly transparent relationship between throttle pedal, V8 and rear tyres; plus just the right amount of body control to feel sufficiently contemporary and competent while also slightly classic and charming. It's a brilliant, brilliant road car, a definition which seems to have gone missing in more than one manufacturer's lexicon. What a thing.

The E60 that replaced the V8 car, as you'll well know, ushered in a whole new era of drive modes, infotainment and automated gearboxes that the M5 hasn't abandoned since. That's as well as offering the only ever M5 V10, being the only ever M5 Touring (for the UK) and offering 200mph potential for the first time. So actually, the E60 is probably more significant than it's given credit for.

But more than that, despite a reputation as something more likely to break down and take all your money than an Orange County housewife, the E60 M5 remains awesome to drive. It lacks that sense of pervasive completeness that imbues the earlier car - a crap gearbox, even crappier brakes and an unforgiving Sport+ damper mode see to that - but if anything those flaws serve to highlight the frankly outstanding good bits.

The S85 V10, for all its problems, is majestic when fully fit. And fully lit. It's razor sharp, outrageously potent and addictively rowdy, perhaps more alluring than ever with knowledge that 8,500rpm, 5.0-litre V10s are very much now consigned to the annals of automotive history. (Hopefully there's a very large section for them.)

If only this engine could have once been paired to BMW's fantastic dual-clutch gearbox. Or even the manual offered to North America. Because the SMG automated manual does spoil proceedings somewhat - and we'll leave it there, honest. Regardless, there's a lot to admire here, the engine in particular dominating proceedings in the E60 more than any other M5 - even the 600hp one.

Consequently there's a muscle car vibe to the E60, the feeling of a vehicle being assembled around a mighty engine - although that sells short its other attributes. It's a more urgent, less cosseting car than the V8, frantic and eager in a manner that still surprises nearly 15 years after launch. The big Bangle barge turns sharply, has bags of traction and a chassis of quintessential BMW balance, too: it can do accurate and quick, it can do slow and silly, or whichever mix between that you fancy.

There's a very intriguing and rather likeable amalgamation of modern and traditional BMW in the E60 that makes it extremely nice to drive: there's a lot of dynamic configuration here, as is now familiar, yet combined with the charm of a truly immense atmospheric engine, which is not. Funnily enough, too, there are the same frustrations here that have lasted into the next decade: the steering is best left in its least aggressive mode, the most focused damper setting is a little too abrupt, and the way everything resets when the car goes off is extremely irritating.

Concerns about the E60 though, wherever they might originate from, should not obscure the fact this is a tremendous driver's car. Bear in mind its contemporary was the rather stolid C5 Audi RS6 and arguably its achievement looks greater still. If anything the E60 is the most exciting car here; the way it combines a wild engine with a chassis able to both contain it and exploit it to your heart's content really something special. If only it could have arrived just a little later; an E60 M5 with a DCT gearbox, ceramic brakes and a later evolution of the EDC damper would surely have been spectacular.

All of which means the very latest M5 is characterless, bloated and forgettable, right? Not a bit of it. This latest Competition feels like both the most luxurious and the most focused M5 yet - and while that definition presents its own challenges and problems, as an automotive achievement it borders on the sublime. Need to trundle down the motorway in eighth gear at 30mpg? Want to decimate a greasy road like you're driving an elephantine Evo? Have three mates to transport in considerable luxury? This M5 has it covered - and then some.

Despite the additional power and the claims of "meticulous retuning", this Comp powertrain feels as it did in the standard - which is to say freakishly responsive, monstrously powerful and with a dash more charisma than the F10 installation, even if it'll never hold a candle to the other two for sound. The gearbox feels two decades - let alone two generations - ahead of the E60 and the 50 per cent power gain over the E39 on paper really doesn't do justice to the scandalous ferocity with which it accrues speed. It just won't stop - ever.

That was familiar, though; what isn't is the way this F90 Competition moves an already impressive M5 on again dynamically. It's more incisive, more capable and more immediate, the directness of the front end in particular something incredible to experience. Combine that with the confidence of four-wheel drive and the pace is absolutely devastating. Moreover, far from being a one-dimensional device, the new M xDrive system is genuinely capable of seeming rear-driven, making the car's attitude no less malleable on throttle than its forbears.

Finally, too, there's an authority and poise to the body control that means the titanic performance can be harnessed; again, it was good in the standard M5, and better here. It's assured, composed and damn impressive regardless of mode, the way 2,000kg is kept in check pretty remarkable. And the brakes - admittedly the optional ceramics here, which should be standard - are absolutely stellar, the pedal firm and the stopping power tireless.

The problem? Without wishing to sound trite, it all just feels a bit much. By giving a two-tonne saloon car the ability to lap Ascari convincingly, the F90's ride quality on the road errs towards the uncomfortable side of tough - whatever the mode. With front tyres nearly as wide as the E39's rears, unlocking the current model's considerable dynamism requires commitment not all that suited to the public road. Especially when it feels the size of a 7 Series. That impression is not helped by the tech and luxury overload, distancing the driver from so much and making the car feel a little aloof at ordinary speeds - which is still probably faster than everyone else. By moving the M5's abilities on even further, its maker has made accessing them more difficult, too.

Such is the march of progress in every car (and far from a fresh concern) yet it feels stark here. Because amazing feat though the new M5 is, and freakishly talented though it remains in the right situation, the level it's now operating on is seldom reachable on the road. An M5 is never going to be a competition car of any kind, so the desire to make it angrier still seems misguided.

Unsurprisingly then, it's the older cars that leave the most positive lasting impression here. They're old enough to feel different and interesting while also sufficiently modern to not be a hindrance everyday. (Well, apart from that SMG...) In different ways they both represent a sweet spot for fast cars, enjoying the right amount of technology to be usable, but not enough to feel alienating. It's not fair to isolate BMW for cramming cars with electronic assistance, because that what the market now expects, though it is beginning to feel like overkill, and that an appropriate balance - for those who like driving at least - is now behind us.

As for an actual victor in this comparison, the outcome couldn't be clearer: the E60 M5 is a flawed masterpiece, as invigorating as it is infuriating, and an unforgettable car for both good and bad - but it must cede victory to the E39. Fittingly, its template is not dissimilar to the current car, with luxury, power, presence and dynamism combined in one package, yet from a time where cars didn't need 600hp to be fast, automatic gearboxes to be desirable, air ionisers to be luxurious and four-wheel drive to be manageable. The E39 represents the very best of traditional M car hooligan charm with modern amenability, and the end result leaves you questioning why there's ever been the need for very much more.