“When I was younger my dream was to be a works rider for Honda. As it turned out I started working for them in the machining section of the Saitama factory.” Tadao Baba isn’t your average Japanese engineer. Small in physical stature, Baba is seldom seen without a smile on his face and a cigarette clasped in his hand. Those who know him well use the terms ‘mad’ and ‘eccentric’ alongside ‘genius’ and ‘revolutionary’, while people who worked on the original 'blade project alongside him often add ‘stubborn’ and ‘fanatical’ into the mix. Whichever words you use to describe Tadao Baba, his legacy is undeniable. In an age in which sportsbikes went fast but refused to handle, Baba broke from convention and built the blueprint for all future sportsbikes. Not bad for a man with no formal engineering training. 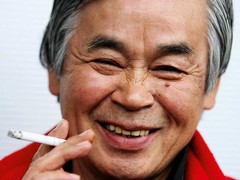 “I didn’t go to university, just high school. I joined Honda in 1962 when I was just 18 years old – only eight years younger than Honda itself! My first bike was actually a Honda, a Super Cub C50 when I was 14 years old. I worked for three years in the machining section making crankcases and cylinder heads for Honda’s CB72 and 77 then, in 1965, I was moved to the R&D area as a test rider.”

It may seem quite a jump to move from a milling machine to testing motorcycles, but Baba was an accomplished rider. Racing in the Japanese 125 championship, Baba took a national title in 1970 and it was this track success that brought him to the attention of Soichiro Honda himself. The pair formed a strong friendship that lasted until Soichiro’s death in 1991, one year before Baba was to unveil the bike that repaid his friend’s faith in him. 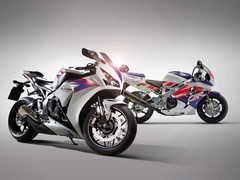 The Fireblade has come a long way

“To a racing rider, working in the R&D and testing area was a dream come true,” remembers Baba. But he soon demonstrated he was more than just a test rider, quickly picking up the engineering skills that saw him promoted to the role of Vice Project Leader in 1972. After developing both on- and off-road bikes at the Hamamatsu factory, Baba was asked to return to the R&D department at the end of 1987 and take over leadership of Honda’s new sportsbike project.

The fact that the project was initially started by Yoichi Oguma, who went on to head up HRC, demonstrated not only just how seriously Honda were taking the development of this new bike but also the esteem in which Baba was held within the factory. He was no longer a Vice Project Leader either; this was Baba’s first solo project, so the new bike would be his baby. 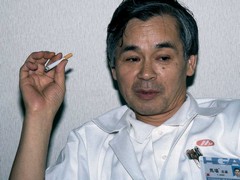 Start as you mean to go on then!

“Of course I was nervous – it was my first project – but I was also confident too,” he remembers. “I love riding sportsbikes and I love the feeling of satisfaction when I can control it as I want. The brief was to create a sportsbike with total control that was easy to ride. This was my world, my ideal bike.”

Baba's way or the highway
Starting with a team of around 30 to 40 young designers from various backgrounds, Baba gathered their ideas and brought them together as a single concept. In the initial stages of development there were few rules; even the 'bladeBlade’s capacity was uncertain – early prototypes were 750cc. But the few rules that were set, Baba stuck to fanatically, something that earned him a reputation as a hard task master. Having set a target weight of 190kg, Baba refused to compromise, demanding that parts were redesigned rather than be too heavy.

“Some of the designers called me ‘Hotoke no Baba’ or ‘Buddha Baba’ in English. I think it is fair to say I was very stubborn when it came to the Fireblade’s weight,” he admits. “Sometimes you have to show someone your leadership through being calm – but I did also get angry.” 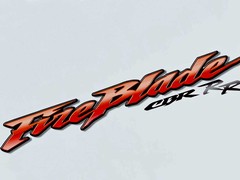 One specific area that anyone involved in the Fireblade project remembers as being especially controversial was the suspension. In the late 1980s inverted forks were starting to become an important fashion accessory on production bikes. Not one for following trends, Baba simply pointed out that they were heavier than conventional forks and refused to put them on the bike. In the end, he designed a conventional fork that looked like an inverted item. A few years later Baba did concede that when technology allowed the use of inverted forks they did meet his approval. “I was pleased to see inverted forks finally on the Fireblade,” he says, “but only when weight technology meant they were lighter than conventional units!”

Setting the tone
But despite being an ‘old school engineer’, Baba’s time in the R&D area also saw him introduced to the latest cutting-edge technology, something he embraced and brought into the Fireblade project. The 'blade was the first road bike designed by Honda using CAD technology and the theory of mass-centralisation, techniques that are commonplace nowadays in motorcycle design. It is this use of technology that Baba cites as the critical factor in the Fireblade’s design, the part that made it stand out from the crowd and helped it become so revolutionary. 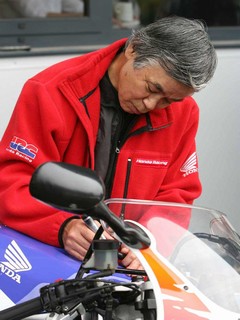 By summer 1989, less than two years after Baba took the reins of the Fireblade project, the first prototype was ready to be tested at the Suzuka race circuit. Before the riders took to the circuit, Baba stood in front of them and made the announcement: “Gentlemen, today you are going to ride a bike that will change the face of supersports.” Was he really that sure? “The results were in line with expectations,” is his simple response today.

Throughout the Fireblade’s development, Baba was anything but a typical Japanese designer who stood at the back of a garage clutching a clipboard. He was much more likely to be found out on track, lapping with the test riders – and more often than not ending up in the gravel. There is a joke amongst the test team that Baba has a magnetic attraction to the gravel traps, something he doesn’t dispute. “I have heard I have a reputation as a crasher,” he laughs. “Some of our test riders think I have crashed every model of Fireblade. I think maybe just four or five. I have also crashed some bikes that weren’t Fireblades as well – an R1, a YZF750…”

With the launch of the 1992 Fireblade, Baba not only revolutionised the sportsbike world, he also started a dynasty of machines that still continues to this day. Baba remained personally involved in the Fireblade’s development until 2004 when he retired from Honda at the age of 60 and handed the project over to Kyoichi Yoshii, a moment that had added significance to Baba. 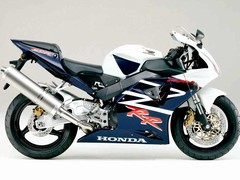 Best of the best

“When I gave the Fireblade project to Kyoichi it felt like the day when my son left home. But the Fireblade has many brothers all over the world so my image of the 'blade lives on.”

Honda, in recognition of the enormous achievement, took the unheard of step of actually changing the Fireblade’s name. All bikes made post-Baba have a small ‘b’ in their logo in honour of the great man. And it didn’t stop there; in 2004, Honda threw Baba a leaving party and as well as Honda Europe funding a tour around Europe, Honda Japan presented him with a wooden plaque with a piston from every model of Fireblade mounted on it, something that takes pride of place on a shelf at his home in Japan.

So, having revolutionised the motorcycle world, what does Tadao Baba do in his retirement? “I still like to ride,” he says. “I own a 2002 Fireblade 954; it was the last model of Fireblade I designed, and in my opinion it is the best 'blade as a total package. The first 'blade has the best image and memories for me, but the final one is probably the best. Although I don’t have a garage – it lives in my parking lot!”

Finally, there is one Baba rumour that needs to be cleared up. Is it true that he used to sneak into the Honda factory, go to the production lines and write messages to future Fireblade owners?