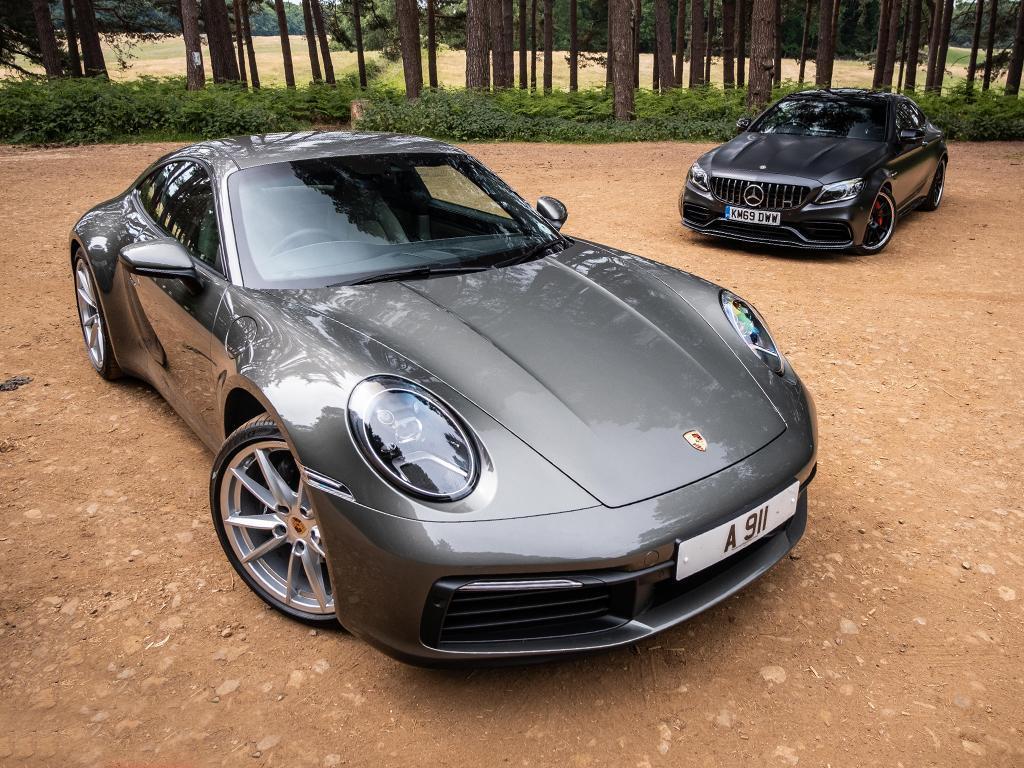 How many group tests have you read recently where ostensibly comparable cars have had their competitiveness (and character) fundamentally changed by options? It's hard to argue with, because manufacturers want to show off what buyers can choose to have - but it can make pitching rivals against each other a tricky business. Is it fair to have two cars battle it out when one has 15 per cent of its list price added on in active roll bars, adaptive suspension, uprated brakes and so on - but the other hasn't? And is it appropriate to praise a car outright when its inherent ability might have been considerably embellished by a fearless go at the extras catalogue?

Believe it or not, the Mercedes-AMG C63 S and Porsche 911 Carrera are pretty close with nary an option: £78,158 plays £82,793. But in these respective press cars, we have a tantalisingly even match; with options on both typically covering the less major stuff like style and technology - bigger wheels, sports exhaust and paint doing most on the Porsche; forged rims, driver assist and the Premium Pack on the Mercedes - we have a 911 that costs £90,891, and a C63 that costs £90,008. However you pay for your cars, that makes them about as comparable as a Big Mac and a Whopper - both drool-worthy favourites from recognised brands, which both cost the same and promise similarly gratifying experiences. Which does it better?

In the 'new normal' world, Mercedes press cars are collected from its base in Milton Keynes rather than delivered. Driving to the shoot location not far from MK, it seems that - for the C63 at least - a brief squirt around Britain's most famous new town is actually a great way to become immediately enamoured by it. Dual carriageways punctuated by roundabouts give the formidable foursome of twin-turbo V8, nine-speed MCT auto, electronically controlled limited-slip diff and bespoke, 12-link rear axle ample opportunity to shine. The V8 bellows melodically, the transmission is swift yet intelligent left to its own devices and the chassis oozes AMG quality: direct, faithful and tautly controlled, yet unashamedly rear-driven in its balance. The Affalterbach charm offensive begins.

Minutes later, 911 and C63 are intriguing to compare parked side by side. Clearly the Mercedes is saloon-derived, taller and bulkier against a 911 that - while larger than ever - still cuts a more athletic pose. The optional Carrera S wheels (20s at the front, 21s at the back, an inch up on standard) give it some visual presence that might not otherwise be there, and the 992 cuts just the sort of dash you'd hope for having spent £90,000: assured, confident, clean cut and desirable. Peering out onto the driveway, you can imagine being content with the purchase.

And the C63? There'd be a stifled giggle at every stolen look. No sane PHer could possibly contain their glee at something so cartoonishly evil sat on the property. The good cop, the benefactor, the charity worker - they wouldn't drive a black C63. Even by AMG standards, it's moody and menacing: arches and wider track introducing the sort of attitude that's rammed down your throat by the AMG aero and those stunning forged wheels. It's bad, but it's also so, so good - and nothing if not bristling with intent.

On more testing roads, however, the C63 begins to show some chinks in what looked like impenetrable body armour - the gym bunny who won't run, if you will. Because even with the AMG kitchen sink hurled at it - the traction control from the GT R, six Dynamic Select modes from Slippery to Race and AMG Dynamics further honing the ESP - the fact remains that the C63 doesn't really like B-roads as much it does more expansive stretches of tarmac. And, crucially for this comparison at least, it doesn't quite deliver the deftness or slick cohesion that characterise the very best sports car experiences at this money.

'Bludgeon' would be harsh, because the C63 has far greater reserves of talent than that: traction is actually remarkably good, resistance to understeer strong and the assists very smartly calibrated. It just doesn't really want to be hustled too hard on a testing road surfaSport+ suspension mode gives it brusque, terse and yet not unflappable control, direction changes can feel hesitant and the gearbox can seem slow when asking for late downshifts. The C63 is a world away from recent AMGs, being entertaining, engaging and genuinely adept as well, though it certainly has a comfort zone. Beyond it, the car feels both a little vague and a little angry, ready to nut you with that nice new grille for making it do what it doesn't want to.

Perfect time to switch, then. And you know what's coming, don't you? Where the Mercedes was perhaps slightly heavy handed and reluctant, the Porsche is alert, dutiful, poised andEach input, from brake pedal to steering wheel and shift paddle to mode switch, elicits a more positive, accurate response - as if a perceptible amount of slack had been eliminated from every single process.

On the same roads, the 911's advantages over the C63 are marked: it rides with greater fluidity and composure despite larger wheels, delicately deflecting bumps that flummox the big Benz, while also connecting the driver more intimately with the road surface. There's an urgency and vigour to the 911 that eludes the Mercedes. Even allowing for the fact that it doesn't feel all that much smaller than the C63, the 911 remains pretty sweet on a B-road. Clearly this is a more mature Porsche sports car experience than ever (because customer expectation demands it), though the 911's quality is abundantly clear. Everything it does, every response and reaction, provides the driver with more confidence to push, to delve into its abilities - and they remain mighty. They won't be tested on the road, but the experience is so tactile and dialled in that hardly matters.

Admittedly, the C63 was always coming into this with one arm tied behind its back; or rather, one too many pies in its belly. Its 1,820kg kerbweight is 240kg more than the Carrera. A disadvantage so onerous that perhaps praise for the finely honed Porsche should be redirected at AMG for getting so much of the mass to respond obediently to the beck and call of its driver. Certainly it always feels heavier than the Porsche, but not by a quarter of a tonne.

Furthermore, if the 911 package serves to show off the handling acumen on offer for the money, then the C63 offers up an almighty powertrain as recompense. Even a few years after launch, and some way from its full potential, the 4.0-litre is devastating engine, sharp as a tack and simmering with a surfeit of performance in the best AMG tradition. Against the 911, the power and torque advantages are comfortably into three figures; even allowing for the weight disparity there's never a point the Mercedes feels anything but demonstrably, hilariously quicker than the 385hp Porsche. Whenever the road straightens, the V8 measures out the difference in smiles, too; drive the Carrera and you could be convinced that any more performance would be unnecessary and gratuitous - right until you drive a C63 S.

Which isn't to belittle the Porsche's achievements; if anything, the smaller six-cylinder zips around to its maximum even more keenly, eradicates lag with greater efficiency and is certainly matched to a crisper, more decisive transmission. The sound coming from the sports exhaust isn't unpleasant either, it boasts volume and is vaguely redolent of those heavily turbocharged 911 racers driven by men with powerful sideburns. But, as experiences to write home about, there's no contest under the respective bonnets, with the C63 V8 exuding autocratic, beguiling power all over the place. Engaging, suave and smooth, for sure, yet with the ability to take your grinning head off, too. It's magnificent.

So, what does that mean when it comes to the business of recommending a £90,000 sports car? Well, there's little getting around the self-evident fact that the 911 is the objectively superior vehicle. It stops, steers and rides better than its adversary, while also boasting a much more stylish, higher quality interior, and probably an engine of greater technical intrigue - if not quite the ebullient personality. The 911 doesn't so much tick all the boxes as render the whole box-ticking exercise redundant - because you seriously have to ask yourself why would you need anything else?

And this isn't where the 'but' comes before we talk about 'charisma' and 'black-hearted charm' in the C63's favour, because its exhaust makes rude rumbly noises and it does big skids. Not only is the Mercedes' dynamic repertoire far broader than that two-dimensional argument would imply, it also sells the 911's respective abilities short as well. There's no shortage of charm in the Porsche either; neither car is guilty of failing to provide an appealing take on what a rear-drive sports car should really be all about.

Clearly, though, there are differences. And if the Mercedes is the car that makes you whoop and holler at its sheer absurdity, the 911 is the one that raises a smile in contemplative appreciation; you're in awe of what it's achieved, if not enraptured by the experience. And whatever accusations that might be thrown at the Mercedes, it is memorable on a different scale.

Which, when most of our driving is done in places like Milton Keynes rather than Britain's B-roads, really counts for something. Our daily drivers need some joy in them because our daily driving is so conspicuously devoid of it. As such, a vehicle that looks like it's from a Marvel movie, sounds like Hades passing wind and has a dial for traction control like a real race car, has more than a little going for it - the C63 entertains you even when hemmed in by a world apparently designed with absolutely no sense of amusement.

Unavoidably though, it's still a C-Class in certain key areas, and with an even-handed hat on, you could argue it doesn't quite do £90,000 of fun. For someone holding precisely the right amount of cash, a 911 with just a few options remains the best way to spend it. The 992 is too talented, too accomplished, just too good at everything to even suggest otherwise. For those spending a little less, however, say the £70,000 or so that a very lightly used C63 S might cost, then there's really nothing else like a 500hp hunk of AMG artillery - we'd recommend it highly, heartily and happily.