Home/Features/Features/Riding the Valkyrie with Tobias Moers 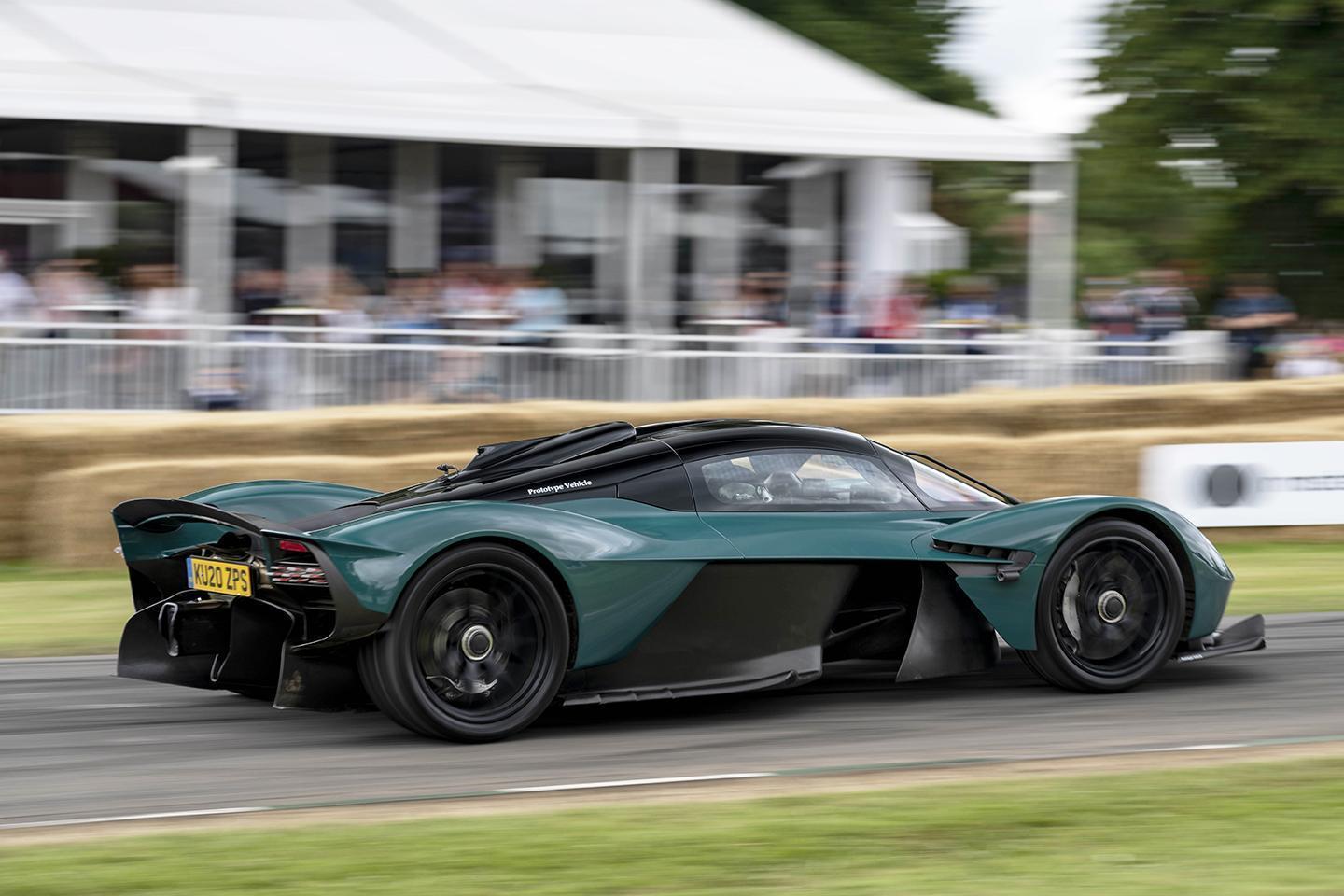 What was originally called the AM RB 001 was announced five years ago, when Red Bull Racing's Adrian Newey and Aston's then design boss (and now Creative Director) Marek Reichmann told a small group of journalists about the putative hypercar at the Goodwood Festival of Speed. The project then evolved through renderings, concepts and being formally named as the Aston Martin Valkyrie while picking up plenty of delays along the way. At the original briefing we were told customers would be taking delivery in 2018. Early ones should really be coming up for their first MOT.

But at this year's Festival, the Valkyrie finally got to make its moving debut in front of a sizeable crowd. And, after begging very hard, PH got to experience it from the passenger seat - during a run with none other than Aston CEO Tobias Moers driving.

Not that things run entirely to plan. I arrive at Goodwood bright and early on the Saturday morning knowing the Valkyrie suffered a public breakdown on the course the day before. Unsurprisingly Moers wants the car to prove its fitness before he drives it. So Darren Turner, long-term Aston works driver and now high performance tester, is subbed in to the first of Saturday's Supercar runs while Moers and I watch from the corporate hospitality. It's been raining and the track is sopping wet. On the big screen the Valkyrie is clearly battling to get its power down. I doubt Moers regrets swapping his stint.

Three hours later the rain has gone, but the track is still damp and greasy in parts. When I get to the paddock Moers is wearing the serious expression you'd expect from somebody about to experience the combination of 1160hp, rear-wheel drive and cold tyres. The cockpit I'm about to get into looks almost impossibly small when seen over the tall carbon fibre sill, and with a six-foot Moers already strapping himself in. At Turner's suggestion I stand on the seat and then slide myself into the narrow footwell. None of the many spectators laugh too hard at my inelegant ingress.

You'll be unsurprised to hear that passenger comfort isn't a major priority in the Valkyrie. The footwell is narrow and slightly offset by the carbon tub's aero-dictated teardrop shape. You also sit with your knees higher than your backside, which feels initially odd. Yet my legs fit and there is actually a surprising amount of headroom beneath the gullwing door, although I will need to tuck my left arm into the narrow seat base to give Moers room to work the squared-off steering wheel.

Sitting in the paddock, the view forward is bizarre. The production Valkyrie will have five screens: two for side view cameras, a 'virtual mirror' on the windscreen rail, a digital display integrated into the steering wheel and a dashboard touchscreen. The prototype adds a sixth: a telemetry data logger for the Cosworth engine, positioned directly ahead of the passenger seat. Add a suckered-on GoPro to record the run for posterity and it's genuinely hard to see much out of the tiny wraparound windscreen, one that seems better sized for a fighter jet than a car.

Moers instructs me to put in earplugs before the engine is started - this with the doors still open. As the V12 fires into an uneven, high-pitched idle it's obvious why; even at 1200rpm it's loud, with very nearly another 10,000rpm to go. Buzzing vibration through the seat back also makes it clear the engine is mounted directly to the back of the carbon tub.

Conversation is impossible as we trundle to the start, but the Valkyrie's low-speed performance is impressive. Moers manoeuvres out of the paddock's gazebo garage without any juddering or complaint from the automated gearbox - it actually moves off at slow speed under electrical power - and there's enough steering lock to negotiate the narrow, twisting between the spectators crowding forward for a better look. Being road registered and street legal, the Valkyrie was sent out to a local petrol station the previous evening to refuel.

Having turned and joined the long line for the start, Moers shuts the engine down and - with the doors open for some welcome ventilation - there's a chance for a pre-flight briefing. The Valkyrie is running in its so-called Urban mode with its suspension in its softest and highest position, and without active aero. The variable traction control is also turned up to its highest setting.

Then there is the rumble of engines and the squeal of tyres as the first of the batch sets off, and it's time to don helmets, restart the engine and close the doors. Moers is wearing a thousand-yard stare and I'm compulsively tightening my harnesses as we edge towards the start line.

The Vantage F1 Edition ahead blasts away in a cloud of tyre smoke and with a jaunty amount of opposite lock applied. Moers takes a more cautious approach as the start marshal points 'go', getting the car rolling before feeding the accelerator in. The noise from behind grows high pitched and furiously angry and the Valkyrie starts to judder as its cold Pilot Sport 2 tyres commence battle with the greasy surface. This continues through first gear, and the car is still shimmering after its first brutally fast upshift before Moers is hard on the brakes for the first corner.

Having taken the first pair of turns at a steady pace Moers starts to push harder as we get parallel with Goodwood House. I'm suddenly experiencing what feels like full acceleration for the first time (Turner later says that even at 60mph the aero package is making a significant contribution.) The physical forces are unsurprisingly brutal, but it is the scream of the engine's top end and the way this merges with the buzz through the bulkhead that makes the Valkyrie feel extra-level from even the most potent machinery I've previously experienced. I glance at the data logger's tacho to see the shift points, this reporting a couple of trips to the high 9s. But even more than 1000rpm short of its limiter the Valkyrie sounds off the scale.

Moers picks a sensible brake point for the left hander at Molecomb that seems to host most of Goodwood's crashes. It's where Chris Hoy buried the Nismo GT-R that belonged to Aston's then-future, now-former boss Andy Palmer in 2014. The turn-in is handled without drama, but on the way out there's a flair of revs and the unmistakable sensation of oversteer. Moers is suddenly busy with the steering; yep, that's the limit alright.

The rest of the run is to an easier pace, especially when we get under the trees and the surface turns properly damp. Moers works the engine hard in lower gears for the crowd, but doesn't try to deliver the huge speeds the car is doubtless capable of summoning. A sensible strategy given the PR catastrophe of a crash with the boss driving.

At the top of the hill we negotiate the turnaround and park amongst the pack of supercars to await the gentle run back down, comfortably the most exotic thing here. Moers is laughing as he takes off his helmet.

"It's an unbelievable car," he says. "If you drive it at somewhere like Silverstone you can push much harder. You can't do that here of course. Traction is an issue, it's true - you felt that - but handling is amazing. I never thought it would be so easy, I expected a really tricky thing to drive, but it's smooth even if it oversteers. There's no snap in the car."

The run hasn't been timed, but has probably taken just over a minute at an eight-tenths pace. But even from the squashed, hot confines of the passenger seat there's no doubting the Valkyrie's specialness. A couple of days later I get to compare notes with Adrian Newey, who drove his creation in one of the Sunday sessions, the first time he has experienced it in front of a crowd.

"It's slightly raw as you probably experienced, it's still got some development work to be done - the car at Goodwood didn't have active suspension," Newey said. "It shows its potential. The cabin noise has come out higher than we wanted, I have to be honest - but I don't think we're unique in this, there will be at least one other high performance hypercar coming out with the requirement to either wear headphones or earpieces."

For an engine that sounds this good, I suspect some will just risk hearing loss.