You may have noticed Lamborghini and McLaren making rather significant new car presentations at Geneva, the Huracan Performante and 720S certainly drawing the crowds. Don't forget about Ferrari though...

The 812 Superfast may be a more subtle supercar prospect than either of the mid-engined cars, but the Ferrari is packing 160hp more than the 640hp Lamborghini. Think about that for the second. Encouragingly too the F12 replacement is a far more dramatic and exciting car in the metal, the staid press shots really doing it no favours. The 812 looks more compact and aggressive than an F12, the aero work at the front and down the sides much more distinct now. That GTC4 Lusso look seems pretty successful too - yep, new Ferrari V12 gets everyone rather excited.

Full details on the update are below; expect a price - and lots of people willing to pay it - pretty soon!

Back in 1964 and at the same Geneva show that this new 812 Superfast will be making its debut in a few weeks, Ferrari launched the

. Based on the 400 Superamerica it had a hybrid 5.0-litre V12 sharing its roots with both the 'big-block' Lampredi and the classic Colombo V12s and a power output of 400hp. A serious number back then, one doubled by its successor, the 812 Superfast. That a naturally aspirated Ferrari V12 still has the capacity to make us draw breath in wonder 50-plus years on and in an age of hybrid assistance, turbocharging and all the rest is rather nice. The more things change and all that. 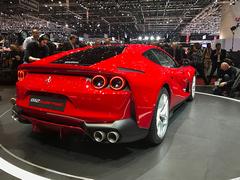 Hints of GTC4 Lusso at the back

Numbers. You'll be wanting numbers. 800hp at 8,500rpm is food for thought, likewise the 529lb ft at 7,000rpm. 7,000! Don't worry it being all peaky and undriveable though because 80 per cent of that is available from 3,500rpm... Variable geometry intake ducts and new 350bar fuel injection are partly to thank for these outputs, the engine also increasing in capacity from 6.2 to 6.5 litres for good measure. The famously underpowered (said nobody, ever) F12 had 740hp and 509lb ft, the TdF version 780hp and 520lb ft, the latter at a sluggish 6,250rpm. Basically a diesel in comparison then.

The only performance figures released thus far are 'more than' 212mph top speed and a fairly meaningless 0-62 time of 2.9 seconds. The 0-125mph figure will be the more interesting one, the F12 doing this in 8.5 seconds and the TdF 7.9. There is, however, no reason to suspect it won't live up to the name. And then some. 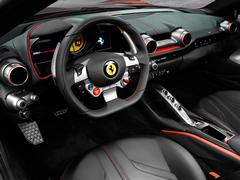 It's not just the performance stats that make the F12 look, all things relative, a little downplayed and apologetic. The proportions are recognisably F12 and there are obvious changes to the front end and flanks but it's at the back where things get really bonkers with an all-round Kamm tail surround from which the lights, diffuser and other aero all emerge. It's not shy, put it that way.

Making sense of that magnificent V12's output are, as you'd expect, a host of new tech features. EPAS makes its first appearance on a Ferrari - likely to raise a few eyebrows - and is paired with what Ferrari calls Virtual Short Wheelbase 2.0, or TdF style four-wheel steering by another name. We've also got Side Slip Control 5.0 which, we're guessing, will have its work cut out should you dare go near that 8,500rpm redline and gearshifts and throttle response have been sharpened yet further. Despite this Ferrari claims the 812 is "still comfortable enough to allow its owners to enjoy it as an all-round experience".

What, you were expecting Ferrari to mark 70 years since its official formation quietly or something?

Renault AIR4 takes to the skies