Ferrari bids to save V12 with new patents

Maranello insists that its flagship 6.5-litre motor must remain unsullied. We agree 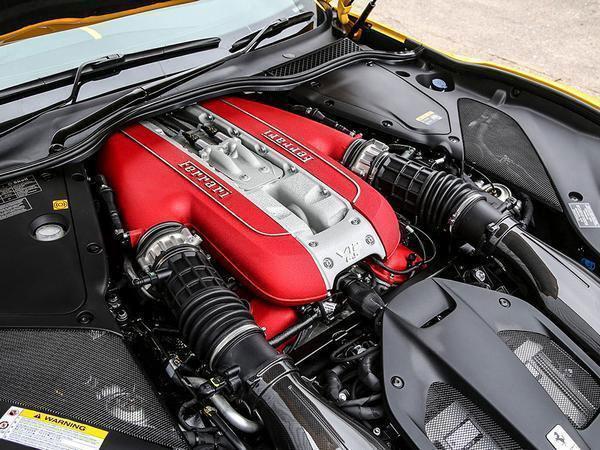 Ferrari has patented a new version of its terrific V12 with detailed updates that are intended to keep it viable in the face of tightening emissions limits. Technical drawings published by the US Patent and Trademark Office show the naturally-aspirated 6.5-litre with an altered injection pattern and new induction pre-chamber, which are said to speed up the flow of gases and create a hotter air-fuel mix to boost efficiency and – crucially – leave power output unaffected.

“To obtain an engine that operates well [during cold running], the strategy commonly known as spark coupled injection has been developed,” is how Ferrari puts it in its newly approved patent. “With this strategy, a small injection of fuel is made in each cylinder just before production of the spark by the spark plug, thus generating turbulence near the spark plug at the critical moment of ignition of the air-fuel mixture.”

This represents a significant change to the usual cold running setup of a combustion engine, allowing for a faster flow of gases through the system to heat up the cat. Having the latter run more efficiently is obviously advantageous when it’s connected to twelve high-revving Italian cylinders. As will the hotter air-fuel mix provided by the new pre-chamber, also outlined in the patent.

The technical yarn goes like this: “Advantageously, the engine further comprises for each cylinder a pre-chamber…with a second spark plug [to selectively determine the] ignition of the mixture present in the pre-chamber and for triggering the combustion reaction.” The new hardware is said to speed up combustion while cleanly burning more of the fuel, too, further boosting efficiency. It’s all very detailed and clever stuff.

Ferrari’s new work on its much-loved V12 combustion motor emphasises its determination to extend the V12’s lifespan into the next decade without the help of boost or electrification. It’s in stark contrast to the route taken by Lamborghini, which has repeatedly stated that hybridisation is its preferred choice to keep a V12 in the Aventador’s successor.

Maranello is no stranger to the petrol-electric solution, having taken that route with the LaFerrari. But the firm has since stated that it believes the V12 can be further developed to conform to ever-tightening regulatory restrictions. Naturally its efforts are underwritten by the colossal prices it can charge for the final product - but it’s hard not to flag-wave any manufacturer’s attempts at keeping a pure-bred twelve cylinder engine alive and kicking.