Jesse's new Escort gets its first proper outing at Donington

Pulling on a pair of warmer socks over the Nomex to stop cramp in the pits at Donington I wondered if Kris Meeke would be doing the same thing at Wales Rally GB. Probably not, but I'm sure he's seen plenty of 'glamour' during his rallying career. To be fair though, a pit garage is the height of luxury for the clubman rally driver. 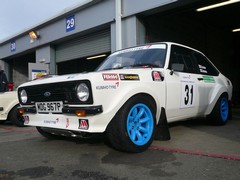 The luxury of a garage!

As this was the first rally in this car. I had a plan, which basically went, "don't do anything stupid, don't drive outside your comfort zone and don't throw it into a pile of tyres." Truth is though, to be at your best you need to be almost unaware of the car. It needs to feel like that pair of well worn, comfy socks I'd just pulled on. If you're busy thinking about the handling balance, the engine, the brakes, pedal set-up, it's not the time to go looking for a personal best. That's not so easy once the light turns green.

This was an historic event with a small 'h', in the sense the 55-year old Dukeries Rally was coming out of the forests to Donington as a single venue tarmac event for the first time. There were eight stages, each one lasting three laps. Most drivers were feeling the nerves, it was clearly going to be fast and nobody had any previous knowledge except some familiarity with the circuit itself. It was a fiercely competitive field too, with plenty of WRC cars, high-end Escorts and a new Darrian T90 GTR+. 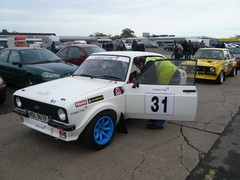 Still a lot of Escorts in rallying - good!

Rain had lashed the circuit the day before and the track was cold and slippery as hell. I launched the Escort on SS1 and could quickly tell the grip was patchy. I was running my usual tyre set-up of Kumho K12 soft on the front and K51 medium/hard moulded slicks on the rear. In hindsight, I could have run soft all round on Donington's smooth surface but wasn't sure how the rear tyre wear was going to go with the extra torque of the Millington. The first challenge was a chicane on the inside kerb of Coppice which we were talking in the 'wrong' direction. Run wide and you spin or clout the tyres and as I was keen not to do either and took it steady. That wasn't a bad decision as it turned out and there was a degree of carnage there.

The grip quickly improved and the second half of the event ran in the normal track direction. The organisers used infield sections and the pits for the stages, which proved to be good fun. We were seeded 31 and while sticking to the plan, made up a few places to finish 27th from a starting field of 92 and 66 finishers. 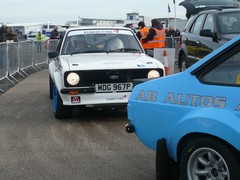 A new Donington stage for everyone!

We had a few more teething problems along the way but nothing serious. A lambda plug fell out of the new exhaust system but the crew in the next pit found us another. The flat shift started cutting on its own. I fixed that by turning off flat shift in the ECU and reverting to a quick lift on the throttle (which took some brain adjustment mid-rally).

The problem was due to play in the shift-cut switch on the Sadev gearbox, but importers SWR Motorsport were on the case after the rally and immediately sent a fix in the form of a tiny spring. I also found that I couldn't work the hydraulic handbrake mounted conventionally between the seats and I need to fit the vertical type I had in the Yellow Peril. Otherwise, the car went like the clappers, the stiffer suspension set-up I'm testing felt good for the smooth tarmac, though I might try to improve turn-in a little more by softening the front springs a tad.

It was a good start in the new car and a fabulous event. The Neil Howard Stages followed two weeks later at Oulton Park but as it was the first round of the new MSN Championship for circuit-based single venue rallies, entries sold out in two-hours and we missed it. The budget is tight anyway, so we'll probably skip Rockingham in December as well and maybe emerge at Brands Hatch in the New Year. In the meantime, I'll bring you a winter fettling update or two.

Previous updates:
Jesse's new Escort in all its 313hp glory
First run at Castle Combe for the new RS