Two sets of front tyres, 10,000 miles and a lot of fun later, the Civic Type R departs the PH Fleet 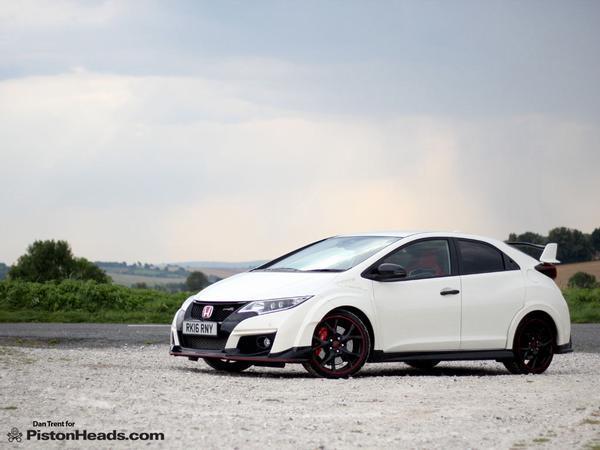 The Civic has gone. I'm sad. It has in fact been gone for a few weeks now and I'm still upset. It had its flaws, of that there is no doubt, but I also think it's one of the very best hot hatches on sale. Time to explain why... 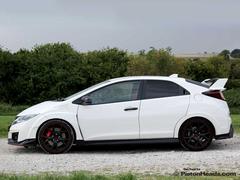 If hot hatches are about the best combination of practicality and pace you can find, the Civic is superb. By small fractions I prefer both the

as driver's cars, but neither of those offer the same level of usability as the Civic. It has a huge boot, space for four adults and all the amenities you would expect of a Honda hatchback. Stripped out hatches are often criticised on PH for missing the point of a hot hatch, something that could never be levelled at the Type R.

And it was always heroically, hilariously, fantastically fast. Even after six months that hit from the 2.0-litre VTEC turbo never failed to amuse (once you were through the soggy throttle response), even when coming from quicker cars. It revved really well for a turbo engine and punched so hard; that near-170mph top speed felt eminently achievable. It was capable of using all that power too, very seldom squandering it to wheelspin. In addition, while the Civic Type R could never be described as sounding good from the inside, having shift lights and a gearshift that good almost made up for it.

The traction it could pull out of a road was remarkable, though the fact our car left on its third set of front tyres (changed at 8,000 miles) is worth noting. There had to be a penalty somewhere! Even compared to hot hatches of just a few years ago though, the way the Civic would haul itself out of bends was staggering. I loved the brakes. I loved the grip. I loved the intensity. It perhaps wasn't as minutely adjustable as the best hot hatches, but the Type R's touring car vibe is one I really enjoyed. 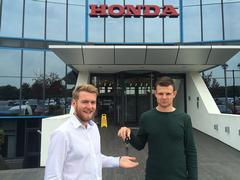 "So how many wheels did you actually kerb?"

Yet it didn't sacrifice ease of use for that wild streak. The ride is firm, but in the large part it's very well damped and certainly better than something like a Fiesta ST. The interior is initially a little perplexing (and won't impress in the showroom) too, but give it a little time and it makes far more sense. Interestingly the quality feels very high as well; while the design may not be inspirational - and the graphics really are crap - the impression overall is of a very tough and well built cabin. And the seats are brilliant. As discussed at the time, the journey to

was a perfect display of its on-road and track manners.

No mention of the Civic Type R would be complete without discussing how it looks. I grew to really enjoy its boldness and attitude, even if it's not exactly pretty. And if people are shallow enough to judge you before you've even got out of a car, that's their problem and not yours. It would be a shame to miss out on such a car because of other people!

There were everyday gripes that never improved though, namely the terrible turning circle and visibility. The reversing camera provided with the GT pack proved near invaluable, particularly with PH parking now in a multi-storey. And the way the steering wheel entirely obscured the speedo display in my driving position was irksome, particularly when rivals from VW sit the driver so well. 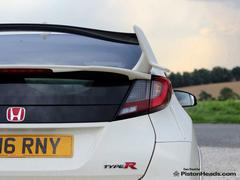 Those issues can be overlooked for the sheer enjoyment provided by the Civic Type R since April however. It's focused and intense and aggressive in the best Japanese tradition, but with enough 21st century comforts to make it a viable everyday proposition. I think Honda should be commended for making a turbo engine genuinely exciting too.

Why Honda feels the need to replace the Civic Type R already I'm not sure, but if the new car can improve significantly on this one then it will be damn good. While this Type R hasn't quite usurped the Megane as my favourite front-wheel drive car, it really is very close. If you have £30,000 to spend on a hot hatch right now, I implore you to try one. I think you'll really, really like it. And for the record I still prefer the Type R to the Focus RS - even with more time spent in the Ford - though that's probably a test to revisit now winter is setting in...

Welcome the first ever Type R to the PH Fleet!
Type R does fast brilliantly, but slow isn't so bad either
Civic squares up to its hot hatch nemesis
New tyres on, Matt takes the Civic... into a kerb
Shock, horror... is Matt warming to the Civic's looks?
Through 8,000 miles and the Type R continues to charm