Ben's replaced one fast Clio with another, and this one's heading straight to the track

In the 15 months that I owned my

, I rediscovered what I thought I knew about cars and driving. Firstly, you should ignore any stigma attached to owning a French hot hatch, because they're utterly brilliant. What they may lack in interior design and finish compared to rivals, they make up for in sheer driving enjoyment. It also taught me just how much bang for buck you get with an old Renaultsport Clio and, believe it or not, how reliable they are too. 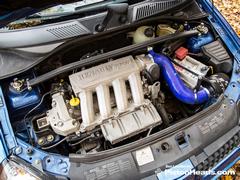 This is still standard. Mostly

Fortunately for me, in the year I had KN55 HWX values started to rise. So paired with wanting to try something a bit different and an urge to shave tenths off my sprint times in the upcoming

, I made the difficult decision to part with it. I felt like I was cheating on a girlfriend, doing the automotive equivalent of chopping in a size 10 for a size 8. That happened a bit earlier than expected too, after a mint 30,000-mile Clio 172 Cup popped up on the market. Naturally, my plan was to turn it into a track-ready car, which purists and garage queens will read through gritted teeth.

But how to better the 182 Trophy? To start with, the 172 Cup is 70kg(ish) lighter thanks to Renault binning the ABS, ESP, air conditioning, sound deadening and using thinner glass too. Weighing in at nearly 200kg lighter than an EP3 Civic Type R (which I was also looking at), the Cup was looking promising on paper despite being 30hp or so down on power. The Clio squares up well to the Civic with 170hp per tonne against the Honda's 166hp per tonne, so just nips it on the power-to-weight front. 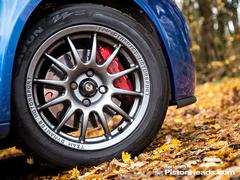 Front calipers are now from a later 197

My main concern moving on from the Trophy was losing those incredible Sachs remote-reservoir front dampers, so that was my first port of call when it came to modifications. After many hours of scouring forums and browsing websites, I picked up the phone to

. For the price of refurbing my Sachs dampers last year, I had a set of brand new fully adjustable coilovers. With height adjustment front and rear and 30 settings for the dampers, I couldn't wait to test the set up on track. Off came the 16-inch Turini wheels, and on went another set of 15-inch Team Dynamic Pro Race 1.2s wrapped in Avon ZZS tyres for everyday road and wet track use. I've still got my other set of 1.2s with Avon ZZRs for dry track use, so I'm covered for whatever the elements throw at me.

Craving more noise, I went to K-Tec for its superb induction kit and stealth sports exhaust system. Neither will really do anything in terms of power, but they certainly make the drive audibly more exciting. Inside I've swapped the seats over too, as one of my few frustrations with the Trophy was how unsupportive the Recaro Trendlines were. Handily for me, I'm only a stone's throw away from Corbeau Seats in Kent so, a short drive later, I was heading home with a fresh pair of Clubsport seats. Given that they manufacture everything in-house in the UK, I chanced my arm at a set of custom three-point harnesses as well as I couldn't find anything on the market I liked. Lo and behold, two weeks later I had them fitted to complement the seat set up. 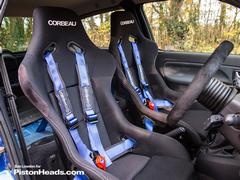 Still with me? The only thing I had left to rectify was the woeful stopping power. Now I could have just fitted the set up I was running before, but I wanted to go bigger and better. So I went for a Brembo four-piston conversion from the Clio 197/200, which is actually quite common now on 172/182s thanks to how easy it is to do. I recycled my Pure Motorsport suspension top mounts and strut brace and added in a Whiteline rear-anti roll bar to finish off my upgrades.

Once all that was done, I was itching to just get out and drive. It does feel faster than my old 182 although perhaps that's partly a placebo effect of knowing it's lighter. The suspension is firm, but with the damping in its softest setting on the road it's still forgiving enough and has a nicer ride compared to the set up I was running before. The rear-anti roll bar makes the car feel more planted - which inspires more confidence to push on through corners - while reducing lift-off oversteer in case you've overcooked it and need to back off. I'm now at the upper limit of my class for the Javelin Trackdays Sprint Series, so that's me done modification-wise for the foreseeable. Now all that's left is to rack up the miles over the coming months, and I can't wait to get out driving. Track action coming up next!