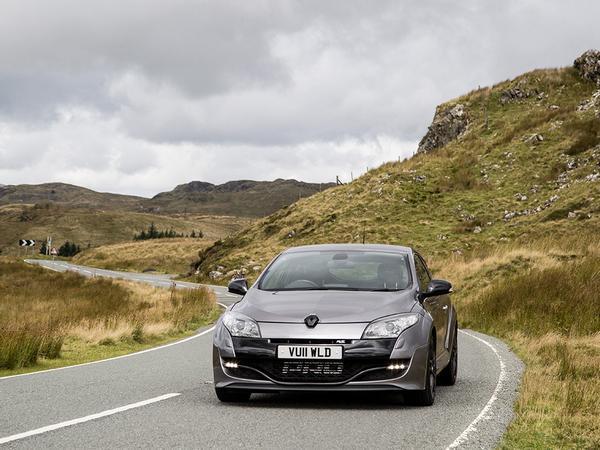 In the time it has taken me to write this update, I'd pretty much bought and sold my R26 230 F1 Edition Megane. I've since covered over 6,000 more miles in VU11 WLD and it's fair to say it has come a long way since I bought it. 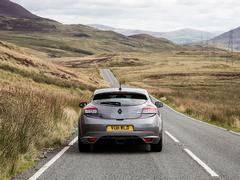 Well, when you have family in Wales...

With my brakes sorted, I met up with PHer M77MWW (also known as Matt away from the Internet) to chat about his infamous Capsicum Red Megane. Coilovers were on the table and still haven't been ruled out yet, but he advised me that while his KW Clubsports were sensational on track, the car was too compromised on the road. Given how impressive the car was at Rockingham, I wanted to try the springs route first, and Matt recommended the H&R solution. The car sits 35mm lower and is ever so slightly stiffer, but is such a great compromise for road and track, reducing roll in the corners without being too harsh on our well-maintained British roads.

Let's talk about power. While in standard form the car is hardly lacking, out of the 22 cars I've owned I've yet to have one with more than 300hp. And given that the current breed of hot hatch seems to require that magic number to even be considered by most, why not create my own for a fraction of the cost?

It's widely suggested that Renault was modest with its quoted power figures on the 250, and that purely a map alone would take the car beyond that magical figure. But I don't just go into GBK and order a beef burger; I want all the trimmings to make it tastier. Sorting induction, exhaust and cooling seemed like a good place to start.

While ordering my Forge intake hose, it seemed rude not to upgrade to its diverter valve to complement my open-cone Ramair air filter. Open cone filters are great if you're still a 10-year old inside like me and like lots of noise, and also offer the best power gains with a map. My last stop was

for its intercooler and turbo cooler package. Just look at the difference in size from the OEM intercooler to the Pro Alloy unit; it's quite something! The coolers show respective 18 and five per cent decreases in temperature, so I can rest assured the car won't be overheating with the additional boost.

With everything in place, it was time to make the long journey north to RS Tuning in Leeds, but not before stopping off at Midlands Renault Specialists to get the belts, water pump and dephaser changed as part of the 75,000-mile/six-year service interval. £550 later, I was on the road again for the really exciting bit. With a forecourt packed with Renaults, including its own Clio R.S.16 build, it was easy to see how Paul has built up such a good reputation at RS Tuning. With the car on the rollers, he talked me through my options and got to work. 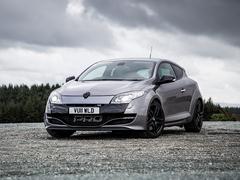 Ben says he has enough power. For now...

A short while later, he walked through the waiting room with a passing comment "it's a strong one, this". Smashing my expectations, the final map delivered a staggering 321hp and 360lb ft. In a front-wheel drive hot hatch.

I struggled to contain my excitement as I sat in the passenger seat for a test drive. With a short shift into second, my heart was in my mouth as the car pulled hard, propelling us down the road in a way I'd never had thought possible. The car was transformed. Despite that, it's not intimidating to drive and with controlled throttle input in the lower gears, you can get the power down very, very quickly. With full expectation for the front wheels to spin up everywhere, I was very impressed with how well the car copes with the power.

Next stop was Wales, to see what the Megane could really do on some decent roads. With my brother in tow in his Mini John Cooper Works and blessed with some cracking weather, our first landmark was Rhayader to take in an old frequent jaunt through the Elan Valley. While the roads here are narrow and don't really allow you to test a car's ability, it's a truly stunning location and an old favourite. 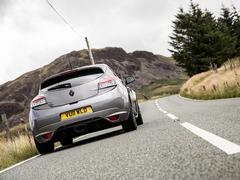 Wonderful Wales and a mega Megane!

After a lunch stop in Aberystwyth, we headed to Bala to pick up my favourite road in the country: the B4391. The combination of smooth roads, jaw-dropping scenery, wide corners and little traffic makes it the perfect spot to stretch your legs. It's a shame to have to travel hundreds of miles to experience roads like this, but it's worth every single one of them. With so much torque lower down the rev range, you can hold a higher gear in the knowledge that a squeeze of the throttle is all that's needed to engage that mechanical differential through a corner and propel you out the other side. Yet this is still only a taste of the car's capability.

There's plenty of track action planned for next year to properly exploit the power and to see how far the car and my driving has progressed, since I started driving on track two years ago in my first Renaultsport. There's going to be plenty more to see from the Megane in the coming months but, until then, I'm off out for another drive.