Value is an odd concept at times. It makes sense when you are talking about items made from rare materials like diamonds, or produced in a way that takes time and extreme skill, like a Swiss watch movement. Less so when evaluating perceived value of a collection comparable car components. And more specifically the wild fluctuations in value when a badge is glued to them. 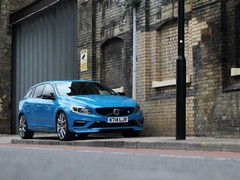 Wherever it went the Volvo stood out (not just for paint)

OK, so obviously some cars are worth more money. Some are developed by brands with incredible racing heritage and some are even built with parts so exotic that new names have to be invented because ... well, just because it sounds cool. Step forward Pagani and your 'Carbotanium'.

Every time I've written about the Volvo it's inspired a fairly wide range of opinions. On the one hand you have the folks who love the idea of a Volvo born of an after-school project by a Swedish Touring Car team. On the other, you have people who say things like "How much?! £50K is too much for a Volvo!" Let's think about that. Too much. For a Volvo.

But this isn't just 'a Volvo'. Sure, it starts out as one, which means you get comfort, practicality, reliability, safety and an excellent range of standard fit gadgets. But it is also dripping with high end componentry like Ohlins dampers and Brembo brakes. It has carbon fibre chassis braces, attractive 20-inch Polestar designed wheels shod with Michelin Pilot Super Sport tyres and just enough exterior styling to let people know it means business without betraying the Q-car roots. What's more it has six cylinders, a Borg-Warner twin-scroll turbo and a properly fruity sounding exhaust.

Not a natural track car but not shamed either

, which not only has similar levels of performance, but also space, fit, finish and equipment. But despite the Audi's shortfall in brand name parts and engineering partners it seems to be universally accepted as being worthy of a £50K price tag. And that's what you'll have if you specify an S4 to anything like the level of a V60 Polestar.

So ultimately what we're saying is that some people are so completely blinded by their preconceptions of the badges stuck to a car that they'll instantly discount it. Which is a shame. Because in this case the V60 Polestar is not just a viable alternative to something made in Germany, in many ways it is more appealing. Even more so once you've actually got behind the wheel of one. This is backed up by the fact that everywhere I've taken the car it has been a talking point, and everyone who has driven it has been won over by its charms. As such, if you're in the market for a mid-size family estate car with performance and rarity on its side, I urge you to arrange a test drive in a V60 Polestar. Of course, it won't be for everyone, but don't just discount it without having a go first.

When you're in a line of work that sees you regularly changing cars it is rare to become attached to one. The Volvo V60 Polestar has been a fantastic car to spend time in over the last four months and 6,000 miles and I'm genuinely very sad to see it go. My daily commute is going to be a sadder place without the big blue wagon to welcome me every morning with a comfy heated seat and bark from the exhaust to wake up the neighbours. So for now I'm going to comfort myself with the prospect of Volvo making a V40 Polestar. Here's hoping it comes to fruition.

Previous updates:
Hot Swede welcomed to the PH Fleet...
A few others have a go in JD's Volvo's, they love it too!
Pot holes ruin a long weekend in Wales