A Megane with graphics being filmed around the 'ring? Time for a new lap record, surely... 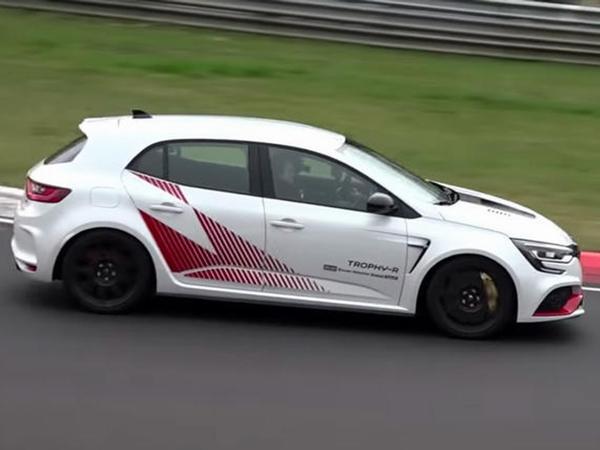 The rumours were true - that white Megane spotted on the Nordschleife at the end of last month has now been seen again, shorn again and bearing Trophy-R decals.

Indeed, it's a very similar theme to that seen on the old Trophy-R, with white paint combined with red and black graphics. Given how production ready the car looks, with nothing else left to reveal or take away - plus the fact it's being filmed - the Trophy R surely can't be far from a full reveal. Remember there were just 10 months between the Megane 280 drives and those of the 300 in this new approach from Renault Sport; employ that logic to the Trophy-R and it'll be subject to media drives in September. Which would work very nicely with Goodwood Festival of Speed reveal, no? Or perhaps, given the Renault 5 Turbo is 40 years old in 1980, the reveal can wait until the New Year. Who knows. But consider us very excited at the prospect.

Beyond the graphics being uncovered, there's nothing much new here in addition to what's already been seen, presumably because it's the same car. The bonnet is now vented and scoopier, maybe as a tuned version of the 1.8-litre turbo needs additional cooling.

As for the Nurburgring context, you'll recall that this Trophy-R needs to surpass 7:54 to beat the old car, and 7:47 to best the Golf Clubsport S. Honda will no doubt crow about its 7:43 in a Civic Type R, but that was using a prototype car. With seemingly no intention of using a production version anytime soon. But this certainly isn't over, not by a long chalk; looks like there'll be a number coming from Renault Sport soon...

Could this stripped-out version of the current Renault Sport Megane be the model to finally see it earn a reputation on par with its predecessors? New spy pics suggest that Renault Sport is already turning the wick up on its Trophy car - a process which has typically seen the most expensive Megane gain an R badge, and legendary status to boot. Wishful thinking? Well, the latest mule was caught testing you know where - and while it confirmed nothing for sure, the manufacturer did concede to PH that its development programme is moving forward much more quickly than it did with the previous generation.

There are other reasons to be cheerfully optimistic, too. Note the cladding on the bonnet and the additional vents either side of it. Renault wouldn't be the first to add a raised section just for the sake of styling - but there might also be a legitimate reason; like making space for a bigger intake. The last R version of the Trophy (from 2014) didn't receive a power boost, but there's every chance Renault has been encouraged to extract more punch from the boosted 1.8-litre, which develops 300hp in the standard Trophy.

One thing we can be certain of, though, is that should this prove to be the R, it will be the most aggressively set up version of the current Megane yet seen. See the back seats? Or rather what looks to us like the conspicuous lack of them? They're likely gone as part of a Dieppe-spec diet that should also include the removal of sound deadening, addition of lightweight wheels (probably the ones that are an option on the Trophy) and, if the last 275 Trophy-R is anything to go by, an infotainment delete. The current Trophy has deeply bolstered Recaros and stiffer Cup suspension as standard, but the R might get more aggressive geometry and tweaks to its four-wheel steering in order to maximise the changes. Plus, we spy a strut brace in the back to stiffen things up.

That's a tantalising list of ingredients that we have no doubt will make the R faster and more agile than its five-seat sibling, but will they be enough to regain Renault Sport its once long held title as the maker of the world's best hot hatch? Of course, it was only during the previous generations for Megane and Clio that we assumed with confidence anything from Dieppe would wipe the floor with its opposition. Not earning such accolades with the present models must hurt the engineers in the division - so expect them to come out with all guns blazing in the Trophy-R. Looks like we won't have long to wait anyway...