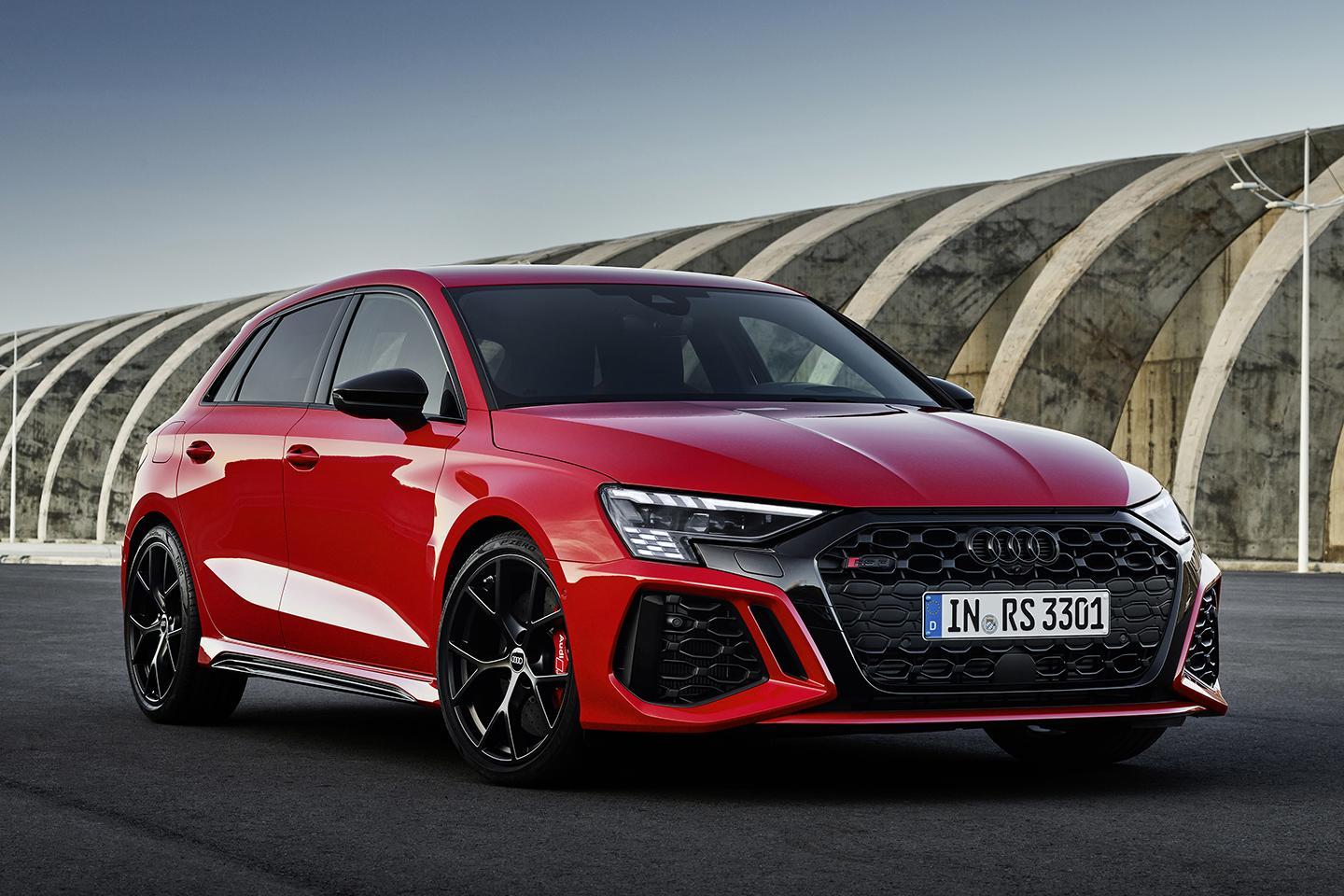 Last month's partial reveal confirmed a lot of the new Audi RS3's vital statistics. Some of them were expected - the five-cylinder engine, stiffer suspension etc - others less so, with a Drift Mode on the menu alongside subtler tweaks like bespoke subframes and increased negative camber that hinted at a substantially more rewarding RS3 than the manufacturer has ever attempted before.

With some disguise still on, however, we were denied a full look at it, and that aspect is crucially important in a fast Audi. We're not being facetious or unoriginal (much) - how many great Audis have been badly styled? From RS2 to RS6 and Quattro to R8, a perfectly pitched aesthetic has become a core part of the package.

So here are the RS3 saloon and Sportback in all their glory, the "expressive and unmistakeable" flagships of the A3 range. Certainly those fond of the subtler Audi RS won't love what they see; even ignoring Kyalami Green, the RS3's big bumpered look - alongside the blacked-out grille and gaping intakes - ensures it's never going to just blend in like previous iterations might have. Wider tracks (33mm up front for both, 10mm at the rear for hatch only) feature alongside 19-inch wheels, an RS3-specific diffuser (with some weird additional mesh above) and the trademark pair of oval exhaust pipes complete the look. Plus bonus RS nerd points if you've noticed the new air outlet behind the front wheels.

The RS3's interior is just as bold, and made to look more so with red and green launch cars lit up like traffic lights. Notable changes include shift lights, an RS Monitor (Renault Sport presumably can't call dibs on that anymore), a head-up display, carbon fibre as far as the eye can see and RS sports seats. An RS Mode button on the steering wheel will be useful for when the RS Torque Rear mood takes you - though the driver must provide their own "watch this!"

The RS3 isn't, of course, the first premium hot hatch with a drift mode; its main rival, the Mercedes-AMG A45 S, also has a torque vectoring rear axle. Interestingly given their similarities, the Audi will significanty undercut the AMG when the RS3 goes on sale next month - the Sportback costs from £50,900, the saloon from £51,900. Although an array of trim levels - Carbon, Launch Edition, Vorsprung - and options - ceramic brakes, Matrix LED lights, Nappa leather, speed limit raise - will ensure no RS3 leaves the dealer at those RRPs, they do represent a useful saving over the '45 adversaries. The 421hp A45 S hatch starts from £56,595, though bizarrely the CLA is cheaper - at £52,495 it's actually perfectly pitched against the RS3 saloon.

The inevitable twin tests aren't far away, either. Orders open from August, deliveries of the new RS3 are due before 2021 is out. Or just in time for perfect Quattro weather. Expect more details on exact UK specs soon - Kyalami Green isn't obligatory...