Upset all the fast estates have disappeared? Volkswagen R to the rescue... 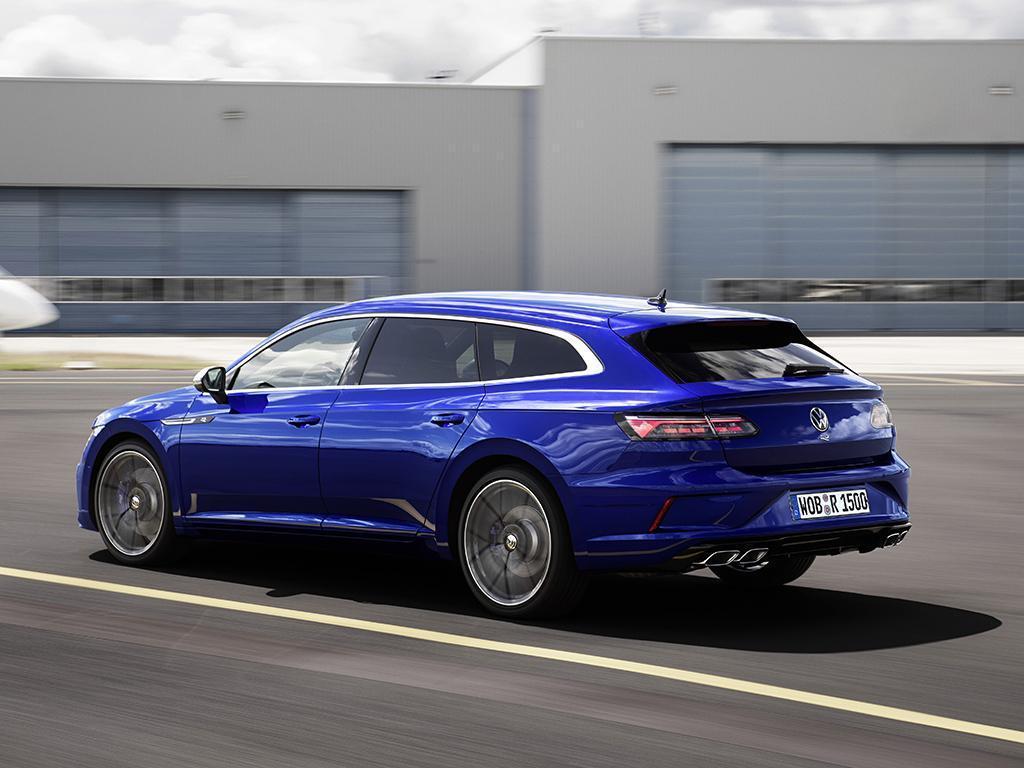 Once upon a time, they were everywhere: from Mondeo ST220 to Insignia VXR, Saab 9-3 Aero to an assortment of Volvo T5s and T6s. The fast estate from a mainstream manufacturer was almost the norm rather than the exception. Then, seemingly before anyone could say 'liftback', it just about disappeared. The hot hatch became even better (and larger), and tastes moved away from the estate (if fashion ever favoured them) to the far trendier SUV. Without a premium badge, the traditional family wagon became a tough sell.

So let's all be cheered by the fact that VW (having quietly piloted the idea with Skoda) has brought it back, channelling the much-loved old Passat R36 into this, the first Arteon R Shooting Brake. It's a little swoopier than most estates, though there remains the promise of more than 1,600 litres of luggage space with the seats down. And swoopier does mean it looks really, really good.

At 4,866 long, 1,447mm high and 1,871mm wide (without mirrors), the Arteon sits between a 3 Series and 5 Series Touring in terms of dimensions; VW is promising a car that "entirely and expressively reinterprets the estate concept." So that means cleaner engines than ever before, the first Arteon eHybrid, a swathe of assisted driving technology and, most importantly, that R flagship.

Powered by the EA888 evo4 2.0-litre turbo and offered in both the standard fastback and Shooting Brake bodies, the R is set to offer - according to Jost Capito, no less - "a new level of driving dynamics." And he said the T-Roc R was going to be decent (which it was), so there's reason enough to give credence to the statement.

That's because, while lots is familiar from the fast VW back catalogue - EA888 up another 10hp, to 320hp, a standard DSG, 310lb ft and 4Motion - there's more to the Arteon R than meets the eye. With technology known as R-Performance Torque Vectoring (or merely a 'torque splitter', in the virtual press conference), there may finally be a 4Motion VW with a bit of pizzazz about it.

Essentially, the clutch-based system allows for up to 100 per cent of drive torque to be sent to the outside rear wheel during bends "in milliseconds". So rather than the prescriptive front-to-rear divide which has always characterised the 4Motion cars, this new splitter is promising a "much more dynamic" drive. Think how cars like the Mercedes-AMG A45 have been improved by giving their four-wheel drive systems greater side-to-side bandwidth. Let's hope the same can be true for the Arteon R.

Elsewhere, both models get the familiar fast VW makeover. There are four exhausts, the Lapiz Blue paint available as an exclusive option, smoked lights and larger (here 20-inch) wheels. The new, digitalised - which means more screens and more technology - Arteon interior is distinguished in the R with leather sports seats, carbon accents and an 'R' button that immediately sets the car to Race mode.

It all sounds pretty encouraging. The VW R model of "premium performance" has proved popular over the past few years (to put it mildly), and the prospect of that innate appeal combined with exciting new chassis technology and a handsome estate body is an attractive one.

At the moment, VW will say only that the Arteon will be on sale "in 2020"; given we're already half-way through the year, though, it can't be too far away. The R will be launched alongside the rest of the Arteon range, which will comprise 150hp and 200hp diesels, the 218hp hybritwo petrol models: 190hp and 280hp. There's something for everyone, then, and most importantly an Arteon designed specifically for those who like fast estates - which sounds like great news to us. More news on UK spec, pricing and availability as soon as we have it.