something crazy was coming

. Namely, how can it be improved further? Chris Harris didn’t have a whole lot to say against the seventh-gen GTI when he drove it last week. And he didn’t even get a go with the uprated 230hp GTI Performance version. 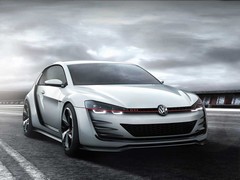 It's a Golf GTI, just not as we've known it

He can now skip that and go straight to this, the 503hp, 3.0-litre, direct injection, V6 turbo powered Design Vision GTI VW will be bringing along to the Worthersee meet. And to think Audi and SEAT must have been pretty chuffed what they came up with too…

To be fair, while Audi and SEAT’s concepts have half a grip on reality – respectively lightweight technology for road cars and customer racing vehicles for touring and endurance competition – the Design Vision GTI is a little more unhinged. VW is claiming 503hp, a 186mph top speed and 0-62mph in 3.9 seconds from its concept. Even your most ambitious Worthersee fanboy probably couldn’t reliably see that kind of power from the standard GTI’s 2.0-litre turbo, the Design Vision GTI benefitting from access to a somewhat better stocked toybox than your average Euro tuner. Indeed, though there’s no official confirmation the twin-turbo petrol V6 was possibly purloined in a late night excursion into the Porsche factory and levered out of a facelifted Panamera before being given a light tickle to go beyond 500hp and 369lb ft. It also drives through a four-wheel drive transmission and DSG twin-clutch gearbox, ceramic brakes bringing it all back down to earth. 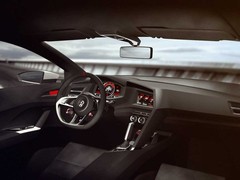 Harnesses and helmets for minimalist cabin

(Modularen Querbaukasten in case you were wondering about the anglicised description/abbreviation disparity) that underpins the new GTI. Here the front axle has been moved forwards for a longer wheelbase despite a 15mm reduction in overall length. It’s also 57mm lower and 71mm wider with 57mm extra in the front track and 63mm in the rear. Sadly this is just one of the reasons VW says “the concept car belongs on the race track.” Still, if this can be achieved with the MQB platform even as a one-off concept it bodes well for possible future production models, the four-wheel drive underpinning this car perhaps hinting towards (but, sadly, probably not) a reprise of V6 R Golfs of years gone by.

So far VW has only released the following concept sketch; more photos coming as soon as we can get hold of them.