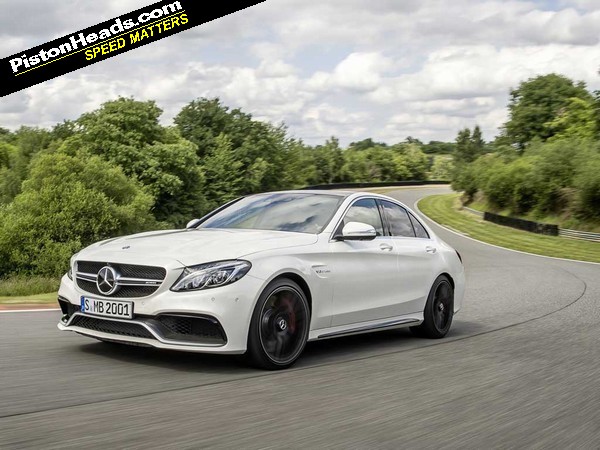 The all-new Mercedes C63 AMG is here! Only it isn't, because it's now called the Mercedes-AMG C63, in keeping with the new naming convention introduced with

with which it shares its 4.0-litre twin-turbo V8 engine. 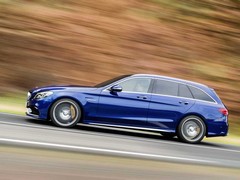 had best have enjoyed its brief moment in the sun too because with the arrival of the new C63 we've got an all new instalment of the long-running power war between M GmbH and AMG. We'll get to that shortly though; first up some highlights of the new C63.

Good news includes two power outputs - standard 476hp/479lb ft and 510hp/516lb ft S - and fuel consumption improved by almost a third. Downsizing (it's all relative) from 6.2 litres to 4.0 litres and a weight saving of 90kg over the outgoing W204 C63 play their part here, a coasting function in the updated MCT seven-speed auto also helping. It all means most un-AMG like efficiency numbers of 34.5mpg and 192g/km, figures even the most ardent fan of the outgoing M156 normally aspirated V8 can't ignore. There's a lot more tech than before too, from standard Porsche-style active engine mounts to optional ceramic brake discs. Joy of joys a mechanical limited-slip diff is now standard on the C63 too, the S getting a fancier electronically controlled locking diff. 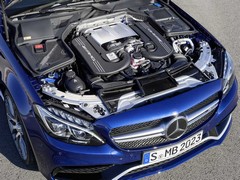 63 is just a badge; turbos make up the numbers

Bad news? Well, even AMG hasn't been able to escape the trend for 'have it your way' configurability, abandoning the endearing simplicity of the outgoing C63 and getting a multi-mode AMG Dynamic Select system with an influence on everything from steering weighting to damper settings and even how much noise you get from the exhaust system. You get three standard modes, plus an individual one with the S getting its own 'Race' mode too. Predictably the steering is electrically assisted too but at least AMG boss Tobias Moers has been able to assert his taste for linear steering racks and ditched the variable ratio one of

. Looks are subjective too but some may miss the hard-edged brutalism of the outgoing car, the current swoopy Mercedes design language bulked out with 14mm extra metal in the front wings, a reprofiled front bumper that juts out 54mm further than the standard car's and the expected quartet of square-cut exhausts at the back. Oh, and you can get it as a wagon but it weighs an additional 70kg. 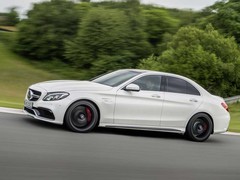 Ready for some more numbers? Brace yourself... Given that all

quizzed in our recent meet put the engine at the top of their 'loves' list we'd best kick off with the new V8. A wet-sumped version of

in the GT it gets its own designation of M177 but shares the direct piezo injection, 'hot-V' configuration and basic architecture. Like for like in the GT and SLS the new engine actually weighs 5kg more than the normally aspirated 6.2, the new car's weight saving coming from structural use of aluminium. Its power delivery promises to be very different from the old engine though, peak torque coming in at 1,750rpm rather than 5,000rpm like the normally aspirated V8. So no more traffic light embarrassments at the hands of diesel drivers then. The sole transmission choice remains AMG's quirky automatic gearbox/wet clutch 'hybrid' with, it's promised, crisper shifting than before. 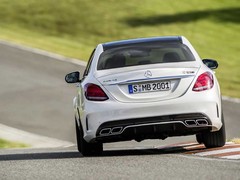 Off the line the 0-62 times are pretty close across all versions, the S saloon managing the best at 4.0 seconds, a four tenths improvement over the old car's best. All versions are limited to 155mph but these numbers tell only half the story - mid-range thump should be night and day different from the old engine, which could take some time to reach its admittedly epic stride. Indeed, AMG has actually tuned the new V8 to be significantly more torquey in the C63 than the GT.

Suspension gets widened front track and more camber at the rear and the promise of specific AMG components therein; whether the changes are as extensive as those achieved by M over the standard 3 and 4 Series will be a question to be asked along the way but the under-bonnet shot shows some significant bracing from the suspension turrets to the firewall. 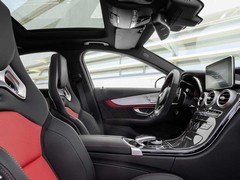 That M3/C63 twin test is some way off yet of course but it's impossible to resist a few on-paper comparisons. M fans can assume the moral high ground of less weight - 95kg less like for like if you compare an M DCT saloon with a C63 saloon and more if you go for a manual - and that extensive additional bracing plus fancy suspension components. Whether you opt for the manual or twin-clutch auto both BMW gearbox options would seem to be more in keeping with purist tastes too.

As is traditional the AMG absolutely thumps the M3 on outright grunt though, the fact both horsepower and torque figures start with a '5' on the S version an astonishing escalation in small saloon bragging rights. Given the mixed reception to the M's blown six cylinder engine AMG's V8, turbocharged or not, retains its magnetic attraction and charismatic soundtrack. Whether there are brains to match the brawn will be revealed when we drive it but for all the philosophical differences M and AMG are as close as they've ever been on paper. 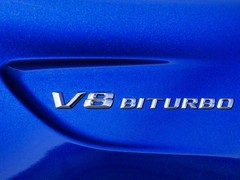 We're hoping to chat with Moers at the Paris show next week so expect more on the car then. Orders open shortly and the first UK cars - standard and S saloons - are expected in late February to early March with the estate coming in April. And, yes, we're already lobbying for