It's the mildest of mildest updates for Audi's flagship, but this is the new A8. We think...

It might be hard to tell from the images, but Audi has subjected the

to a 'wide-sweeping update' for the Frankfurt show. With renewed competition from the 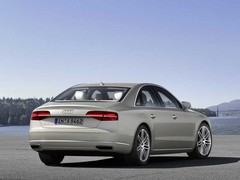 Check out those flatter rear LEDs...

So what's new? Well, given the design is reputedly 'even more expressive' than before, we'll start there. It's familiar Audi facelift territory though, with some reprofiled bumpers and grilles, a 'more sculptured' bonnet and some additional chrome. The 'dynamic turn signals', recently debuted on the R8, are also available.

Perhaps the most notable new feature is the introduction of LED headlights, set to be standard on all V8-engined A8s. Optional 'Matrix LED' headlights include 25 LEDs that can be dimmed individually. To be tested on a rear bumper near you soon...

Most of the A8's engines have also been subtly upgraded to keep them competitive. The A8 Hybrid hasn't received any tweaks, which perhaps indicates a lack of popularity. And that's only likely to continue with the cheaper diesel now faster and more efficient. 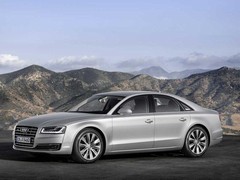 Colours other than silver are available

continues over unchanged, so it's stuck with 520hp and 479lb ft. How mean.

With the exception of carbon ceramic brakes, now optional on other V8 models as well as the S8, the mechanical stuff is largely unchanged; an eight-speed auto and all-wheel drive are standard. It appears the lower-powered FWD-only 3.0-litre diesel has been dropped, whilst the sport diff first seen on the S8 is now standard on the 4.2-litre diesel.

Audi's updates to the interior of the A8 appear designed to remove the driver from the inconvenience of driving as far as possible. So there's an active lane assist, adaptive cruise control with stop and go, an enhanced night vision plus a park assist system. When you're actually stationary, the A8's WLAN hotspot will presumably come in handy. 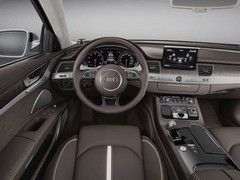 As lavish as ever, now with even more options

Much of the surprise and delight features of the A8's interior are optional. Ventilated and massaging seats, four-zone air conditioning and a fridge are all on the extras list. Those plumping for the A8 L can also have a power footrest but the A8's cabin is largely business as usual; contemporrary, crisp and very stylish.

Despite the limited nature of the upgrades, Audi has implemented a noticeable price hike. German prices will start at 74,500 euros, or £63,800. UK prices will follow ahead of its expected 2014 arrival but, given the cheapest 4WD diesel A8 is currently £56,930, it seems likely they will climb. Can the addition of LED headlights and some extra power really allow it to compete with the latest S-Class?