The RS4 saloon is dead; long live the four-door RS5! 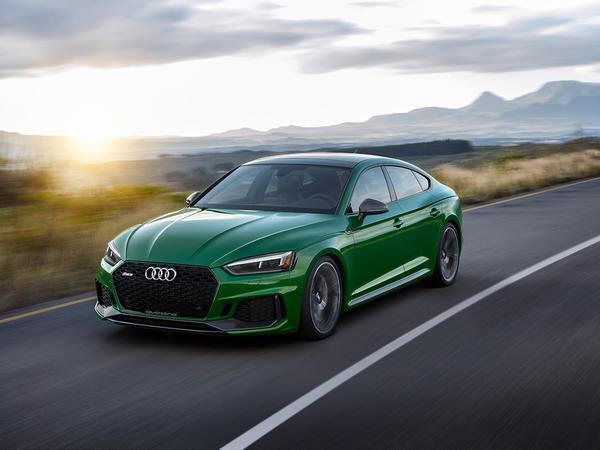 Times are tough for lovers of fast Audis. Not so much if it's a fast estate they're after, of course, with the

both fantastic propositions. Probably not if it's a fast four-door they want, either, with the

a welcome addition to the Audi Sport range. If it's a hot hatch that's required then there's the RS3 five-door, or indeed the S1 for that matter, and a sports coupe then the

You'll immediately have seen what the problem is. As far as four door, hatchback saloons go, there's just the RS7 - the 560hp, £87,000 uber barge. But what if you want the same body style and sporty performance in a smaller, cheaper package? Until now, you've had to look at somewhat left field - and far less powerful - alternatives, cars like the Kia Stinger and BMW 440i Gran Coupe - or maybe even Audi's own S5 Sportback - but that's all about to change.

The new Audi RS5 Sportback is here for you. Its 2.9-litre twin-turbo V6 puts out 450hp and 443lb ft of torque all the way from 1,900 to 5,000 rpm, launching the occupants from 0 to 60mph in 3.9 seconds and to a maximum speed of 174 mph. That acceleration made possible in part thanks to an eight-speed tiptronic transmission with "optimized shift times... specially tuned to sporty driving."

The permanent all-wheel drive will have something to do with it too, the system distributing power 40:60 front to rear under normal driving, though also capable of up to 85:15 or 30:70 to counter any "slippage", should it occur. An optional sport differential adds the ability to channel torque between the rear wheels (though expect it to be standard again for the UK, like the two-door), while Audi Sport's RS Sport Suspension Plus with Dynamic Ride Control, ceramic brakes, and RS-specific dynamic steering can also be included at extra cost.

Aesthetically, all of the usual Audi Sport cues are present; short overhangs, sinewy styling, honeycomb grilles and ovular tailpipes all make an appearance. While the sports suspension - resulting in a ride height 7mm lower than that of the standard S5 - and 15mm wider wheel arches ensure the stance is as it should be.

The RS5 Sportback sits on 19-inch wheels as standard with 20-inch items available on that extensive options list. Gloss Black, Carbon, and Matte Aluminium 'optic packages' can also be specced, as can the RS-exclusive Sonoma Green Metallic paint.

Speaking about the car Audi Sport MD, Michael-Julius Renz, said: "The Audi RS 5 Sportback is more than just an international trade fair novelty - it offers something new to our customers. Our innovative interpretation of a five-door high-performance coupe has neither predecessor models, nor a direct competitor," continuing: "we expect it to conquer all markets."

We'll have to wait until the autumn for it to conquer the UK market, though; the RS5 Sportback initially only set to be available in the US and Canada. When it does arrive here, it's expected to cost the same as the RS5 Coupe at £63,575, and it can be ordered from the summer. Much to the relief of RS fans everywhere.