If ever had a car had the excitement potential to melt PH the new BMW M2 is it. The new

are hugely impressive cars and - as

proves - ones that grow in affection with increased exposure. But not without flaws and, for cynics, fuelling suspicions M now stands as much for marketing as it does motorsport. 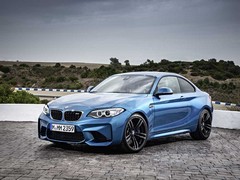 You want some tough guy?

So, is the M2 a spiritual successor to the bombastic and much loved

? Or true reflection of where we fanboys really want the M3/M4 to be? Possibly all of the above and more, though inevitably we'll have to wait until we drive it to find out. For now we have numbers and tech to go on.

Headlines first. A new 3.0-litre straight-six with a single twin-scroll turbo integrated into the exhaust manifold, rear-wheel drive, manual gearbox standard with an optional dual-clutch auto, 19-inch wheels packed into bodywork flared by 55mm front and 80mm rear over a regular 2 Series coupe and aluminium suspension components 'inspired' by the M3/M4. Numbers? 370hp at 6,500rpm with a 7K redline and 343lb ft of torque from just 1,450rpm with 369lb ft available via an overboost function. With the standard manual it'll hit 62mph in 4.5 seconds; DCT with its launch control takes a couple of tenths off that while all versions are limited to 155mph. If you're bothered it'll officially score 35.8 combined mpg and 185g/km with the DCT, the manual slightly worse at 33.2mpg and 199g/km. 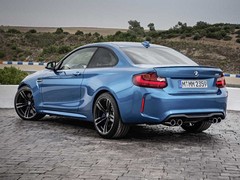 All very well you're thinking. But what about this 'Smokey Burnout' function? Yes, that is a direct lift from the press release, delivered absolutely deadpan and just missing a 'for sure' prefix for full effect. This is only available on the DCT version, along with a couple of other additional features including a 'creep' function and Stability Clutch Control that feathers drive torque to tame the (frankly inevitable) oversteer.

However scant in number compared with the inevitable majority who opt for DCT, real men will, of course, opt for the manual and conduct their own smokey burnouts and drifts via more traditional methods. We'll just have to hope the self-blipping function can also be disabled for maximum purist points.

Either way the M2 should live up to those pumped-up looks with a suitably boisterous driving style, both versions getting the standard fit Active M Differential that can lock from zero to 100 per cent according to where the power is best distributed across the axle. In default mode this operates proactively according to intel from steering and throttle inputs plus yaw rates and more from the DSC system. The familiar M DCT mode permits more 'driver autonomy' while those with an account at their local tyre fitter can of course go all off and maximum hero as conditions and talent allow. 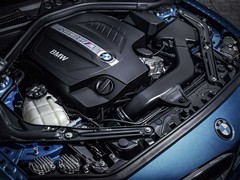 OK, so those are the basics. And they're promising. It gets better the more you pick apart the press release too. The engine isn't as 'fancy' as the twin-turbo in the M3/M4 but that's to be expected. It does, however, share pistons, crank and bearing shells with the bigger car's S55 motor so can claim a degree of proper M credentials. Oil supply and cooling are also uprated, the DCT gearbox getting its own transmission cooler. Steering is - predictably - electrically assisted and has two modes to choose from.

There's no ceramic brake option but the standard four-pot front/two-pot rear calipers gripping 380mm/350mm mount on aluminium bells and sound well up to the job. The aluminium suspension components are said to be 'inspired' by those fitted to the M3/M4 and save 5kg front and 3kg rear of unsprung weight over equivalent steel components. The rear subframe is also rigidly mounted to the body. There are also - stop sniggering at the back - 'further stiffening measures to optimise rigidity throughout the car' though these sadly don't extend to the carbon 'boomerang' strut brace from the M3/M4 spotted in the M235i Cup. More prosaic pressed steel braces do the same job, albeit with less under bonnet bling. 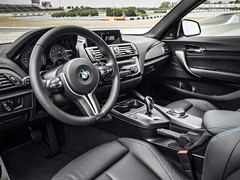 Don't worry, there's a manual if you wish

Alles gut in other words. But where does it fit into the M lineage? Clearly in looks, performance and posture it would seem a natural successor to the 1 M Coupe, having 20hp more but the same torque, tyre sizes and mildly cartoonish looks. Going further back you'd say both cars owe a debt to the old 2002 Turbo but it's interesting to hear BMW state openly the M2 "continues the tradition of the legendary original BMW M3 - the E30 from 1986 - a car famed for its blend of agility and precision, as well as its supremacy on the racing circuit and rally stage."

Admission the M3s (and now M4) that followed the E30 steadily moved away from that car's purist ethos and to a more luxurious, road-oriented mandate? With that M235i Cup seen under development in parallel with the M2 there is certainly a closer motorsport link than that between the M4 and its DTM equivalent - is it greedy to already ponder the idea of a CSL to bridge the gap between road and circuit?

You really want an RS3?

That will probably come down to demand. BMW has confirmed a starting price of £44,070 and it's also been suggested that production will be limited; not to levels of the 1 M Coupe but a set number are likely to be made rather than series production. As the M4 moves up a price point and into a new realm there's more than a sense this car has the potential to be BMW's

moment and if the excitement about the Porsche's purist appeal has been anything to go by hopes would have to be high. If you were headed to a Mercedes or Audi showroom with £50K in your pocket and thoughts of a specced up four-wheel drive mega hatch like the

it should rather give you cause for reflection. The M2 lacks the all-weather appeal of four-wheel drive or five-door hatch practicality of either. But, by heck, an equally appealing premium badge, additional cylinders, rear-wheel drive and a manual gearbox option would seem more than enough reason to hold that thought and test drive an M2 as well.

We'll try not to get too ahead of ourselves in our excitement about the M2. But if the reality comes even close to living up to the promise contained within this first official information it's got proper potential. Deliveries start in April; we'll be setting up camp on BMW's lawn in the meantime and bring you more as soon as we have it.

[Figures in brackets for DCT gearbox]