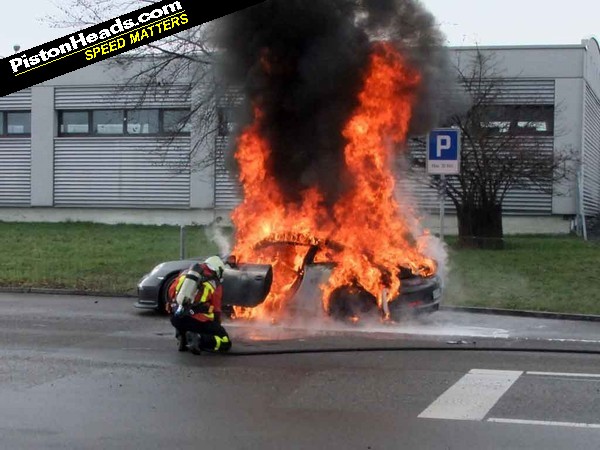 Following yesterday's update and confirmation that Porsche will be replacing all 991 GT3 engines an official press release has been issued, reproduced verbatim below:

Stuttgart. Sports car manufacturer Porsche will be replacing the engines of all 911 GT3* vehicles of model year 2014. This is the corrective action derived from intensive internal analyses that were initiated in response to two engine fires. Meanwhile, it has been confirmed that engine damage resulted from a loosened screw joint on the connecting rod. The loose connecting rod damaged the crankcase, which in both cases led to leakage of oil which then ignited.

After becoming aware of the two accident cases, Porsche promptly took action to avoid any risk to customers by advising them to cease using the affected 785 vehicles until further notice and have them picked up by a Porsche Centre. Now, engines with optimised screw fittings will be used in all Porsche 911 GT3 vehicles of model year 2014 - including in those that have not been delivered yet. The relevant Porsche Centres are in direct communication with customers worldwide to discuss the further course of action.

Porsche points out that no other 911 models or other model series are affected by this action."

UPDATE 18/3/14: We can only imagine the frantic work going on at Porsche as it tries to condense an engine (re)development programme that would usually take months or even years into just weeks. No surprise then the solution to the GT3 fires issue would appear to be the nuclear one: replacement engines for all the cars so far delivered and fitment of the modified unit to all cars currently in production.

In the US Porsche Cars North America's spokesman Nick Twork has been quoted by Autoguide.com as confirming failed con-rod fasteners as the root cause of the problem. In a telephone interview he apparently told Autoguide: "We are in the process of validating the revised part. We will be replacing the engines in each of the 911 GT3s that have been built thus far."

On Rennlist one owner cut and paste what he said was the communication from his dealer. It reads: 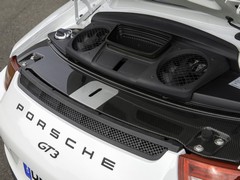 The part that failed is small, fall-out is huge

As advised previously, engineers at Porsche AG have been conducting technical analysis of the Porsche 911 GT3 engine in order to find a solution to the problem which led us to recommend you stop driving your car.

This analysis is now completed, and we would like to inform you about the cause of the problem and the planned remedial actions.

Analysis has revealed that in both cases the engine damage was caused by a loosened piston rod screw connection which damaged the crankcase. In order to avoid this in the future, an optimized screw connection is currently being tested. For the final validation of this solution, Porsche AG is currently carrying out extensive tests.

At Porsche we are rigorous when implementing an engineering solution, therefore, after the successful testing and validation we will be installing new engines with optimized piston rod screw connections in all 2014 Porsche 911 GT3 vehicles.

Due to the complexity of the necessary arrangement, we are currently unable to provide you with a specific workshop date for your Porsche 911 GT3. We will be arranging an appointment with you individually, as soon as the logistics planning is finalized. We will be providing you with additional information within the next three weeks.

We continue to remain committed to supporting your individual needs during this time.

Your personal contact person will make contact with you within the next days to discuss individual solutions to bridge the gap until you are reunited with your Porsche 911 GT3.

Thank you very much for your patience and your loyalty to the Porsche brand.

As we were about to publish PCGB's spokesman rang in to confirm what his American colleague said was correct and that UK customers should have received a similar email to the one above last night and a hard copy today in the post. A formal statement on the findings of the investigation will be published in due course - we were told within three weeks - but in the meantime Porsche is prioritising communication relating to the issue directly with owners.

UPDATE 17/3/14:There were plenty of big numbers discussed in Porsche's fiscal year review on Friday. Record numbers in fact, with 162,145 cars delivered in 2013. That's 15 per cent up on 2012, with profit increased by six per cent, now standing at 2.58 billion euros. That rampant OPC upselling must be working then. And with more money being invested into the Leipzig factory, no doubt ever more Porsches will be churned out in the near future.

But of course there was no avoiding the (flaming) elephant in the room; the recent spate of 991 GT3 fires. Porsche didn't mention that in their official blurb, unsurprisingly. But Bloomberg reports an official comment from Chief Executive Officer Matthias Mueller on combusting GT3s. For now it's fairly brief and terse, simply: "We know the reason and the problem-solving measures... we're testing them". So that's it, with owners set to be the first to know the technical solution as it arrives.

We've spoken to Porsche GB this morning and should hear back this afternoon. More as we have it...

Original story, as reported 24/02/2014:
If Porsche was hoping to put a (fire) blanket on coverage of the as-yet unknown cause of some high-profile fires in 991 GT3s all hope will have been extinguished by a prime time slot on a certain TV show last night.

Well, official word from Porsche that it is contacting owners and "recommending that they stop using their vehicles" is as alarming as it is unprecedented. The above comes from a press release issued on Porsche's global media site, reproduced on Porsche Cars GB's public site in full and concluding "After engine damage occurred in two vehicles in Europe and the vehicles then caught fire, Porsche decided to inspect all 785 delivered vehicles worldwide. There was no traffic accident and no personal injury. Internal studies to determine the cause of the engine damage have not been completed yet." 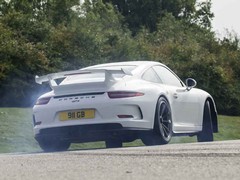 The only kind of smoke you want to be seeing...

Even the terse language of official statements barely conceals the sense of panic that must be going on behind the scenes. And PHers who've either taken delivery of their 991 GT3s or have been prevented from doing so by Official Porsche Centres (OPCs) holding their cars while investigations take place have been unequivocal in their displeasure.

One said, "Got mine on the day of the announcement. Brilliant, no fun for me this weekend, not even driven it yet, supposed to collect Saturday." Another reported a similar situation, with a tantalising taste of his new GT3 before having to leave the dealership empty handed. "Today [Saturday] was the day I was picking up my new baby, a few minutes sat in the drivers seat is all I have had. I have full faith that Porsche will resolve the issue, just hope it's sorted in time to take her to Le Mans. Just in case it's not, anyone have a spare gullwing Allegro I can borrow?"

Keeping pace with online rumour is always going to be tricky for a big corporate machine but given Axis Of Oversteer ran a story about a GT3 catching fire in Switzerland nearly two weeks ago - one of two combusted cars officially acknowledged by Porsche as triggering the 'do not drive' edict - it seems to have been a little behind the curve in its official response.

"Speechless," said one PHer. "Placed my order a year before delivery, car arrives eight weeks late, I stop driving after I see first articles about fire, OPC confirms my VIN is fine, start driving again, stop again! No offer of replacement car, hire car or equivalent. As I say speechless."

So does the GT3 officially have a self combustion problem? Porsche's official line is no, the two fires may turn out to be purely coincidental but it's inspecting both to ascertain what caused them to ignite. The local police in the Swiss town in which the car caught fire a couple of weeks ago have gone into more detail though, this via Google translation: "When the driver perceived strange noises from the engine area, he left the highway. On the Wilerstrasse the driver stopped the car. He set leaking oil and smoke is in the rear engine. A short time later began the Porsche reasons unknown fire."

Porsche GB's letter to owners goes further than the short official statement and admits that "in Europe, two vehicles were found to have engine damage - the crankcase was significantly damaged. Leaking engine oil ignited on the hot engine components, causing the vehicles to catch fire." In a belated attempt to reassure owners it does go on to say, "This did not cause an accident or result in any personal injury of any kind." Phew, eh?

The letter also holds its hands up to the communications failings in alerting owners, admitting, "Media reports are currently in circulation regarding engine problems that may cause fire on new 991 GT3 vehicles and we apologise unreservedly for the fact that you may have learned of this from a third party rather than directly from Porsche."

As it stands this is not a recall, though depending on the results of the investigations into the causes of the Swiss and Italian fires this may yet occur. Porsche has assured us it'll keep us posted - expect all PR personnel at Geneva next week to be clothed in Nomex if nothing has been forthcoming at that point.