Volkswagen is known for a silly Golf concept or two at the Worthersee festival, from a

only for Gran Turismo. Expectations are high each year. 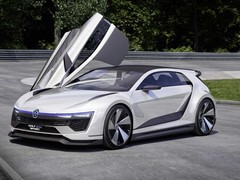 There aren't any cabrios for VW at Worthersee this year, instead two 'breathtaking Golf GT models planned for the near and medium-term future'. They are the Clubsport (near future) and the GTE Sport (medium-term, in case the doors and gigantic wheels didn't give it away).

Let's begin with the Clubsport. A roadgoing version is due next year to mark the 40th anniversary of the Golf GTI, and this represents 'a near-production concept car'. To all intents and purposes it appears a rival for the Megane 275 Trophy - a little more focused and edgier than standard without entirely losing sight of everyday usability.

Power is up to 265hp with an overboost function adding 'around another 10 per cent'. Obviously it's nice to see a manual in the concept too. The aero add-ons here - the front bumper, rear spoiler and diffuser - are said to significantly improve downforce and take the GTI CS 'into the realms of motorsport driving dynamics'. Intriguing. Keep a look out for the production car early in 2016. Geneva perhaps? 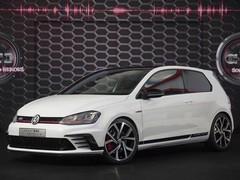 And the fast Golf you can actually buy soon

The GTE Sport combines the 1.6-litre turbo from the Polo WRC car with two electric motors to create a 400hp plug-in hybrid. All-wheel drive and with a carbon body, VW claims 0-62mph in 4.3 seconds, 0-124 in 15.9 and a 141mpg on the NEDC combined cycle. There are various modes that juggle the powertrain to provide electric only propulsion, maximum performance - GTE mode, of course - and so on.

A few design elements relate it back to the current fast Golf range, including the blue grille highlight from the regular GTE and wheels inspired by the 'Austin' design seen on the GTI. VW says the front end design illustrates 'how the Golf GT models could develop in the future'. There are strong hints of that crazy W12-650 in the design too, which is no bad thing in our book.

As mentioned, the Clubsport will be on the road sometime next year. The GTE Sport? Probably the same time as that 600hp cabrio.