Golf R Evo on the way

? Well there may be another fast VW about to steal its thunder as a Golf R Evo has been confirmed. 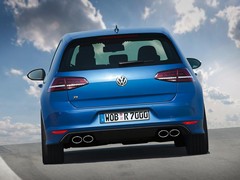 (definitely no pirate-spec Golf RR, shame) could produce 370hp. The significance of this figure being it's a nice round 10hp more than the

. A torque figure of 'over 332lb ft' is also being bandied around too. Guess how much torque the Mercedes makes? And the

for that matter too.

That 70hp gain will come predominantly through tweaks to the cylinder head and induction of the EA888 2.0-litre turbo. The man in charge of doing this will be VW's head of engine development Fritz Eichler. Nothing untoward there, sounds like his kind of task. But he used to work for Mercedes Benz. And was responsible for the A45's 2.0-litre turbo as well. You think the A-Class is a rival perhaps?

Other elements of the drivetrain are likely to remain unchanged, with the same Haldex multi-plate 4WD system and choice of manual or DSG gearboxes.

However, there is a rumour that the ultimate Golf could meet the connotations associated with its 'Evo' tag and be a lightweight special. There is talk of carbon panels and a stripped-out interior for example. A kerbweight of 'under 1,400kg' is again another promising figure, especially with the BMW and Mercedes at over 1,500kg.

More about a limited series production run should be announced when a Golf R Evo is revealed at Beijing in April.