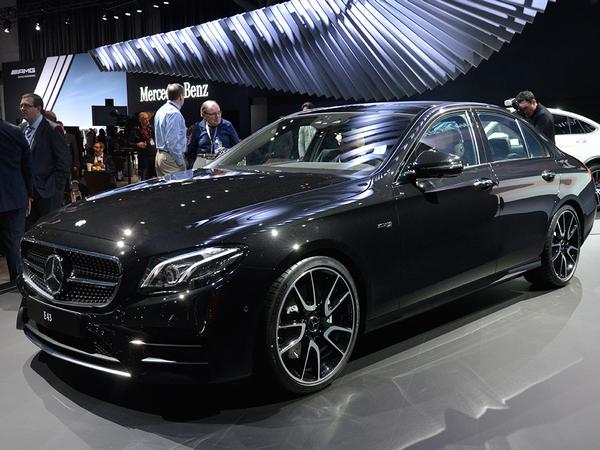 just a couple of days ago; almost as if AMG has read our mind, here is confirmation of the V6 E43 ahead of a New York show debut. 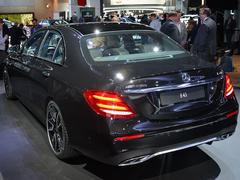 Black with those wheels? Very nice!

Those of you thinking it would be a straight swap from

recently revealed - the AMG boys are busy at the moment - would be partially right. It does use the same twin-turbocharged 3.0-litre V6 but, presumably to reflect the E's superiority, the turbos are larger and the software has been made more "sophisticated" to liberate another 34hp. This brings the total to 401hp at 6,100rpm; torque is unchanged at 383lb ft. With a 31:69 split to the four-wheel drive and shorter shift times for the nine-speed automatic, Mercedes claims a 0-62 time of 4.6 seconds and a 155mph top speed. While we're on numbers, it's probably worth noting the 189g/km and 34mpg, plus a competitive kerbweight of 1,840kg with driver and a tank that's 90 per cent full.

Stats dealt with, time to discuss the "powerful and self-assured appearance". Distinguishing the E-Class are the additional intakes at the front, diamond grille and AMG badges. There's also a very subtle boot spoiler, "rear apron trim in diffuser look... in silver chrome" and a set of very fetching 19-inch wheels. Credit to Mercedes actually for featuring a debadged, black E43; looks suitably menacing, doesn't it? Fingers crossed for an estate...

Inside the sporty intent is conveyed through new seats, red stitching, red seatbelts, a flat-bottomed wheel - but of course - as well as an AMG instrument cluster, just to show how much less than 34mpg you're actually getting. Like the standard E-Class though, it looks like a jolly nice place to while away the miles swiftly. 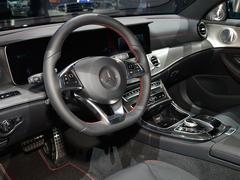 Flat-bottomed wheel, because it's a fast car

As standard the E43 receives the multi chamber air suspension, but with specific AMG sports tuning for "added agility, more neutral cornering behaviours and higher traction". The adaptive damping can be set to Comfort, Sport and Sport Plus, again with specific configuration for this model. There's also more negative camber at both axles, more rigid elastokinematics and new steering knuckles. The brakes are larger, the steering provides "highly authentic feedback" and there's a manual gearbox mode independent of the five Drive Select modes for those who want full control.

There's no news yet on a full-blooded E63 V8, but this E43 looks like a worthy stop gap. Those of you with keen memories will notice its stats aren't too different from those of an E39 M5. After the New York show, the AMG E43 will go on sale in September. UK prices to follow, but it looks like the Audi S6 has just acquired a very close rival.